A mother who lost her baby to a rare congenital heart defect has spoken of her heartbreak after discovering she is carrying a second child with the same killer condition.

But, as time passed, they became determined to add to their family, and doctors reassured the couple there was only a small chance of another baby having the same condition.

HLHS can be genetic, but typically occurs sporadically, in otherwise healthy babies with no family history of the defect, and Jasmine was hopeful that their next baby would be healthy.

On New Year’s Day this year, Jasmine discovered she was pregnant again, but at her first scan, she was given the heartbreaking news that her baby girl had the same heart condition as Lucas.

Further tests showed the condition was inoperable, and now heavily pregnant, Jasmine must face the unbearable horror of giving birth to another baby who won’t survive. 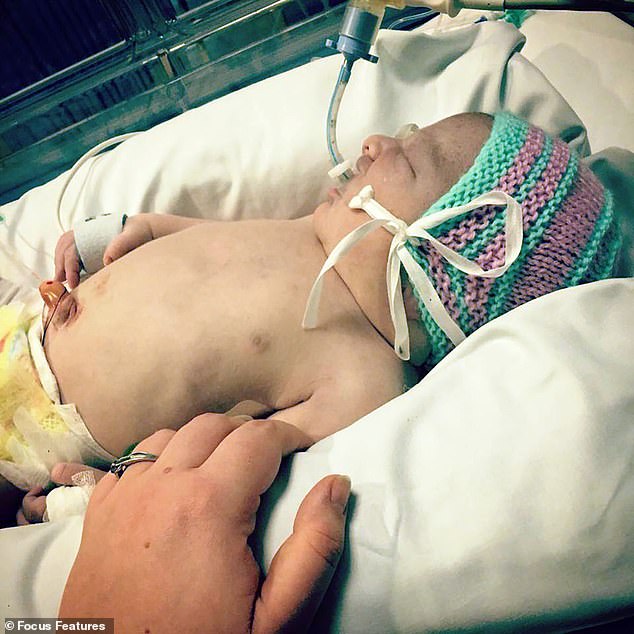 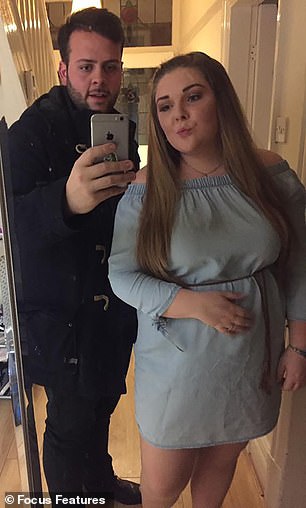 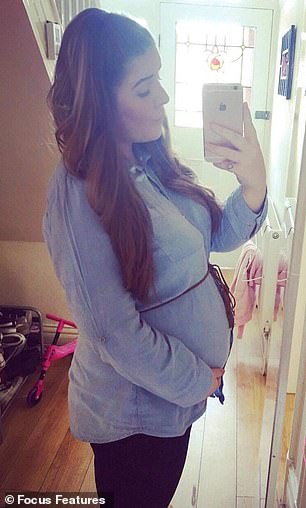 Jasmine and her partner, Kyle Barton, 23, who are parents to daughter, Hallie-Mae, three, were devastated, but, as time passed, became determined to add to their family. On New Year’s Day this year, Jasmine (pictured recently) discovered she was pregnant again 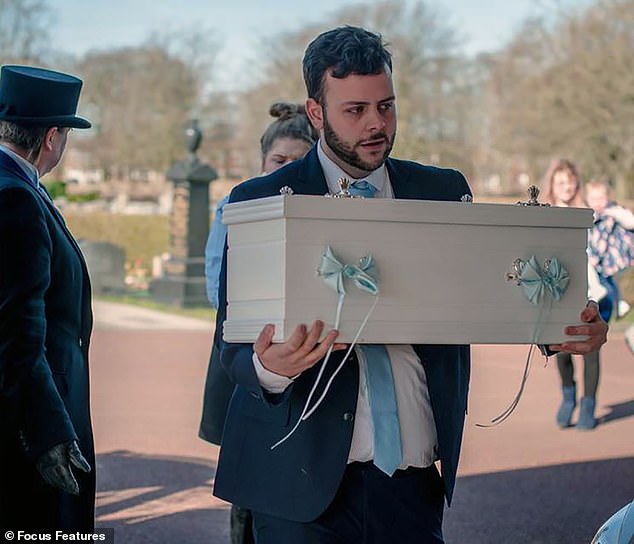 Kyle holds his son’s coffin during the little boy’s funeral. At Jasmine’s first scan for her third child, she was given the news that her baby girl had the same heart condition as Lucas

She said: ‘When I found out I was pregnant, I thought this was a rainbow baby, sent to make us smile again, and we had so much hope.

‘The pregnancy has been so hard, knowing that I will lose her as I lost Lucas. To lose two children seems too cruel.’

Jasmine met partner Kyle, at McDonald’s in their home town of Blackpool five years ago. They moved in together six months later and their daughter, Hallie-Mae, was born in July 2016.

The devoted mother said: ‘We wanted our kids close together, so we started trying again as soon as possible and we were thrilled when I fell pregnant again in 2017.’ 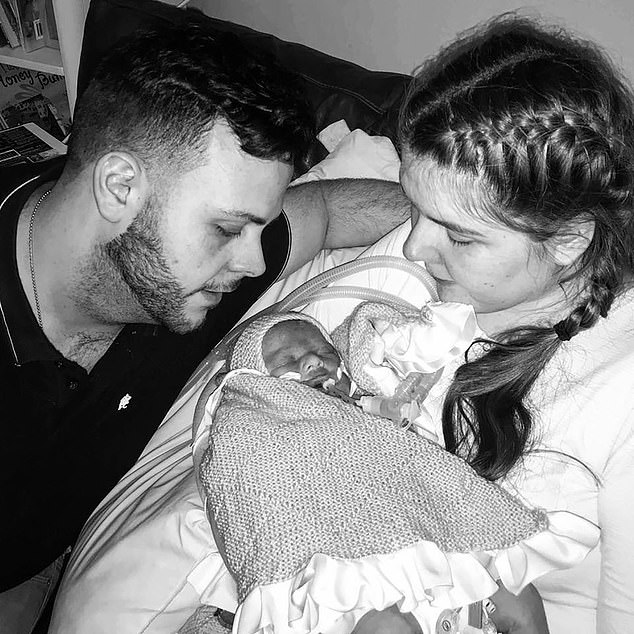 When Lucas-Jay was born, he was taken to intensive care. His parents then found out that his heart problem was much worse than predicted and he died shortly after. Pictured: Lucas-jay after his arrival, being held in his mother’s arms 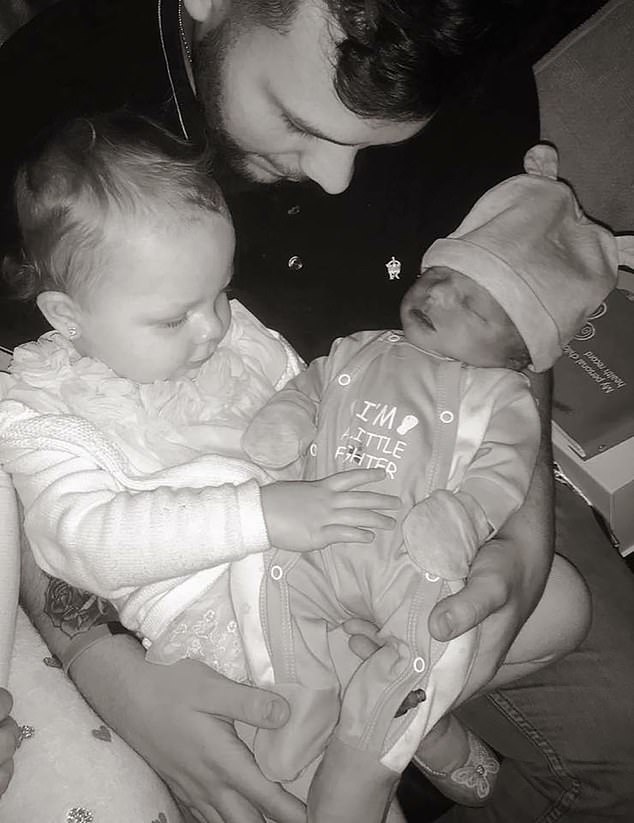 Lucas-Jay died just nine hours after he was born with his family around him, and at his funeral, Hallie-Mae (pictured holding him) wore a dress made of his photos 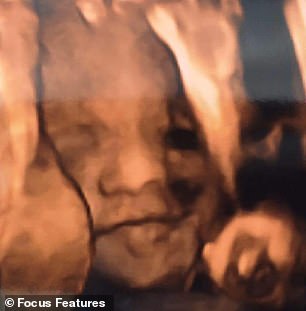 The couple were delighted when Jasmine fell pregnant on New Year’s Day, believing they had been given a ‘rainbow baby’ to ease their grief. But her first scan picked up a heart defect. Pictured: The little girl’s scan

Their son was due in March 2018 and the pregnancy was going to plan, up until the 20-week scan.

‘I could see there was a problem from the start,’ Jasmine said. ‘Then a doctor came to explain that our baby had Hypoplastic left heart syndrome with an intact atrial septum. I felt like my world was falling apart.’

‘He had a 50 per cent chance of survival. We were given three options: termination, comfort care, where we would hold our baby and let him die naturally, or surgery.

‘We decided to opt for surgery, to give our a baby a chance, and he would have to have three major heart operation in his first five years.’

She recalled: ‘When Lucas-Jay was born, he was taken to intensive care. We then found out that his heart problem was much worse than predicted.

‘His oxygen levels were dangerously low, and he was struggling. We were told his condition wasn’t suitable for surgery. He was dying.’ 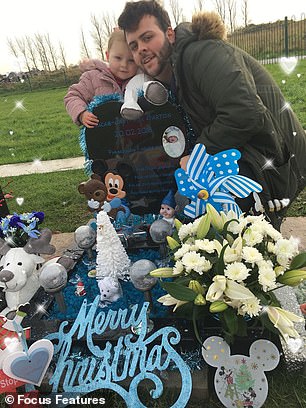 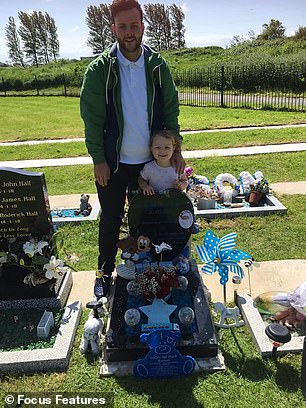 Kyle and Hallie-Mae visit Lucas-Jay’s grave, which is decorated with plenty of toys and flowers 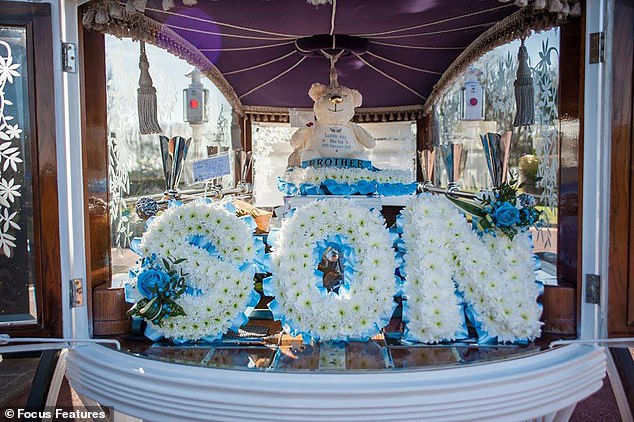 Lucas-Jay died just nine hours after he was born with his family around him, and at his funeral, Hallie-Mae wore a dress made of his photos.

Jasmine said: ‘It was very tough losing our son, it broke us completely, but it also made us determined to try again, for another baby.

‘We were told there was just a two per cent chance the condition would reoccur, so we felt the risk was minimal.’

The couple were delighted when Jasmine fell pregnant on New Year’s Day, believing they had been given a ‘rainbow baby’ to ease their grief. But her first scan picked up a heart defect. 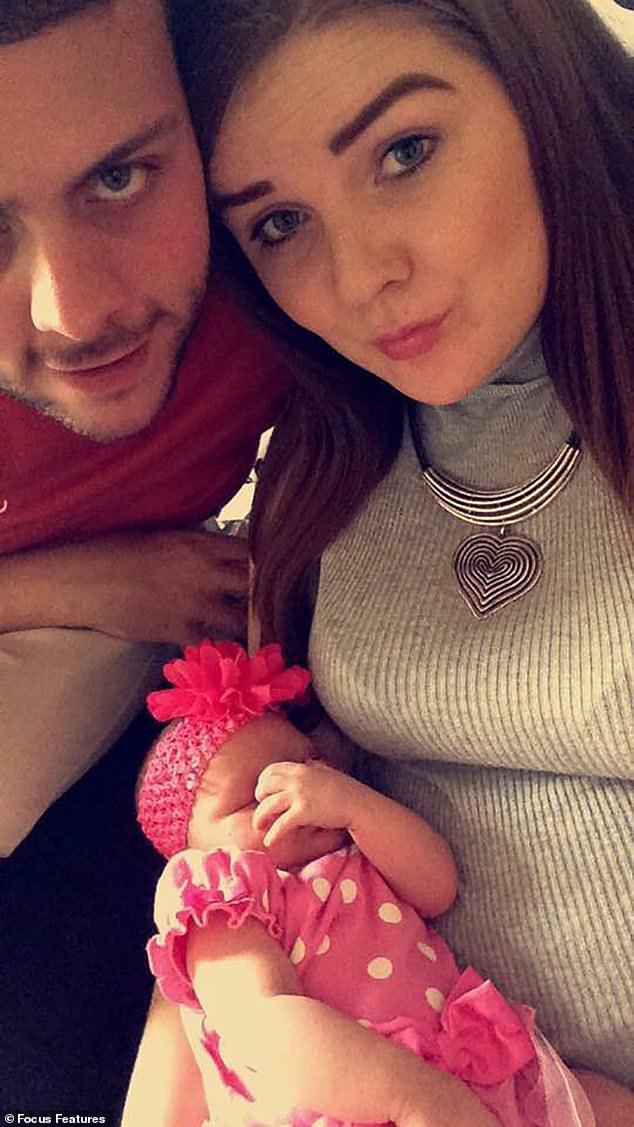 Kyle and Jasmine holding a newborn Hallie-Mae. The couple tried for more children soon after her birth as they wanted any siblings to be close in age

She recalled: ‘We were told at first there was a 75 per cent chance of survival and so we felt hopeful.

‘But a second scan showed that the baby’s pulmonary vein was obstructed and that doctors could offer no surgery and no hope. We were absolutely crushed.’

‘To lose another baby, like Lucas-Jay, is unbearable. I can feel our daughter moving around inside me and it is unthinkable that she won’t make it.

‘All we can do is to make sure her very short life – and her send-off – are as special and full of love as we can.’

Jasmine is due to give birth early next month. The family will now undergo genetic testing in the future. They are now appealing for funds to help them pay for their daughter’s funeral.

Their crowdfunding page can be found here.

WHAT IS HYPOPLASTIC LEFT HEART SYNDROME?

Hypoplastic left heart syndrome (HLHS) is a birth defect, affecting normal blood through the heart and thus the rest of the body.

It occurs while the baby is developing during pregnancy, when the left side of the heart doesn’t form correctly.

Most babies with the condition appear healthy immediately after birth but quickly become breathless if not treated. Most are diagnosed before they are born.

HLHS typically occurs sporadically, in otherwise healthy babies with no family history of the defect.

In a few children, isolated HLHS is known to be genetic. These cases may be due to mutations in certain genes.

But when the specific cause of isolated HLHS in a child is not known, the recurrence risk of left heart disease is estimated at 2 to 4 per cent for siblings.

It is not possible to cure the condition but most children can have a reasonable quality of life if they have successful surgery to manage it.

The CDC estimates each year less than 1,000 babies are born in the United States with HLHS. This number is around 200 in the UK.

Figures suggest 30 per cent of infants who survive a heart transplant will die before they turn five.