The Nationals have dodged the disruption to voting patterns that has beset Labor and the Liberal party, with the junior Coalition partner likely to hold on to all its seats in NSW, Queensland and Victoria.

Cowper, on the north coast of NSW, hung in the balance late on Saturday night, with a 9 per cent swing to One Nation which stripped votes from Nationals MP Pat Conaghan and forced him into a tight contest with independent Caz Heise. 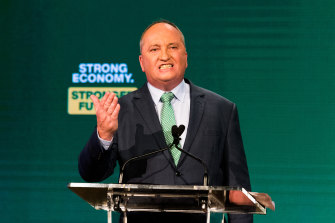 Party insiders warned if the Nationals failed to gain seats then party leader Barnaby Joyce’s position would be questioned, and he would be likely to lose his leadership if the Nationals’ seat count goes backwards.

Resources Minister Keith Pitt, in the Queensland seat of Hinkler, copped a 5 per cent swing against him with independent Jack Dempsey, a former Liberal National Party state minister, attracting 14 per cent of the vote, but looked set to retain his seat.

In Flynn, the north Queensland electorate based around the industrial city of Gladstone, the Nationals candidate Colin Boyce was also looking likely to hang on despite a 6 per cent swing against him.

Despite hanging onto seats the Nationals ambitions of picking up seats appear to have been thwarted, with the party’s hopes of picking up the coal mining seat of Hunter in NSW dashed.

The country party was also hoping to snare the Northern Territory seat of Lingiari, capitalising on the retirement of popular Labor MP Warren Snowden, but the seat was impossible to predict late on Saturday evening, with the vote in many of the remote booths across the sprawling electorate yet to be counted. But Labor was ahead at the end of the evening’s count.

The Nationals hung on to the northern Victorian seat of Nicholls after the retirement of popular MP Damian Drum despite recording a huge 23 per cent swing against candidate Sam Birrell. Independent Rob Riestly mounted a strong challenge to Birrell and picked up 27.39 per cent of the primary vote, but it was not enough to defeat Birrell.

One Nation also ate into the Nationals vote in Lyne, affecting a swing of about 10 per cent.

Nationals MP Kevin Hogan gained popularity when he spoke out against the slow response time of emergency services teams in his north coast NSW seat of Page, based around Lismore, which was flooded in March. He was rewarded with an 11 per cent swing towards him.

Nationals leader Barnaby Joyce started the night in a bullish mood, telling Channel 7 shortly after voting closed that the polls published during the campaign had missed a groundswell of support for the conservative side of politics.

“I think you’re going to be in for a big surprise. I think that the pollsters have got it wrong again,” Mr Joyce said.

Cut through the noise of the federal election campaign with news, views and expert analysis from Jacqueline Maley. Sign up to our Australia Votes 2022 newsletter here.