Florida officials have been scrambling over the past week after a wastewater pond at the former Piney Point phosphate mining facility sprung a major leak — a situation officials described as a potential “catastrophe.” While officials have managed to drain the reservoir enough so that a “tidal wave” of wastewater did not flood the area, experts told CBS News that the threat to the environment remains.

Residents who live immediately around the area are physically safe for the time being, state officials said, but millions of gallons of water have flowed into the ground and local waterways, and millions more were pumped directly into Port Manatee, an entrance to Tampa Bay on Florida’s west coast, to prevent the reservoir from collapsing.

From March 26 to April 9, approximately 237 million gallons of water either leaked or were intentionally discharged from the reservoir, the state’s environmental department said. Officials stopped discharging water into the port on Friday, according to the state’s water quality dashboard.

It’s now a no fly zone so I cannot get any additional drone video. The county live stream drone is offline. #PineyPoint pic.twitter.com/Yedq05GPoX

The water was determined to not have harmful levels of radioactive material, and officials have said the water in the reservoir meets marine water quality standards “with the exception of pH, total phosphorus, total nitrogen and total ammonia nitrogen.”

When questioned by CBS News, the state’s environmental department did not specify what the water quality standards are for both the facility and marine waters. “It is slightly acidic, but not at a level that is expected to be a concern,” the department said in a statement. “Field operation teams are now deploying nutrient reduction and removal treatments of the water on-site to address any required discharges in the future. This will significantly reduce nutrient loading to Port Manatee and help minimize water quality impacts.”

Dr. Henry Briceño, a professor and water quality researcher at Florida International University who has several degrees in geological engineering, told CBS News that despite what officials say, the water does not meet water quality standards and officials should not “try to play games with people.”

“The concentrations of the nutrients are way higher than the receiving water body,” he said, referring to Port Manatee. “Those waters are not within normal, regular criteria of water quality for Tampa Bay. “

The nutrients most of concern when it comes to the wastewater — which is a combination of saltwater from a local dredge project, process water and stormwater — are nitrogen and phosphorus. While both are essential to plant life, excessive amounts can destroy ecosystems, experts say.

A joint statement issued this week by the environmental groups Suncoast Waterkeeper and Tampa Bay Waterkeeper estimated that the amount of nutrients entering Tampa Bay were equal to “approximately 100,000 bags of fertilizer” and that the wastewater “has approximately ten times the nitrogen of raw sewage.” These figures, the groups said, are based on recent samples and levels of nitrogen may vary throughout the water column.

Jenna Stevens, state director of the organization Environment Florida, described the impact of this “nutrient pollution” to CBS News.

“Each body of water has a certain amount of pollution that it can take before things get really, really bad and we start seeing large water quality problems. And this amount of nutrient pollution can be really damaging,” Stevens said. “When [officials] were like, ‘Oh, well, it’s no more acidic than a cup of coffee,’ well, it still doesn’t meet water quality standards for marine waters. It’s too acidic for our waterways and it’s too loaded with these pollutants.”

The Tampa Bay Estuary Program, which is tracking water data near Piney Point, says on its online database that they are most concerned about increased total nitrogen and ammonia going into the coastal waters because of the drastic impact these nutrients can have on the ecosystem’s health. Nitrogen concentrations higher than 5-10 milligrams per liter may be problematic, the program says, and reports show that water near Piney Point was recorded with nitrogen levels significantly higher than that.

On March 31, five days after the company that owns Piney Point submitted a report to the state that water was seeping into the gypsum stack that holds the water, one water sample from Piney Point Creek, which wastewater was initially leaking into, registered 191.5 milligrams per liter of nitrogen, an amount more than 19 times higher than the noted limit. Another point nearby registered 214.4 milligrams per liter, which is more than 21 times higher, according to the database.

According to environmental officials, the total nitrogen concentration in marine water should be limited to 0.74 milligrams per liter.

A week later, on April 7, officials said “elevated levels of phosphorus” were detected in Port Manatee, where wastewater from the Piney Point reservoir was being discharged. An April 5 water sample detected 2.1 milligrams per liter of orthophosphate, a form of phosphorus. That level is 21 times higher than the marine quality standard for phosphorus, which is 0.10 milligrams per liter. Other samples taken from the port on that date also had levels at least double the standard threshold.

Stevens, from Environment Florida, fears what this spill, or any in the future, could do to Tampa Bay, which for decades has been the focus of restoration and protection after being disastrously polluted in the 1950s and 1960s. In the 1970s, locals, the state and the federal government took on extensive efforts to revitalize the area. 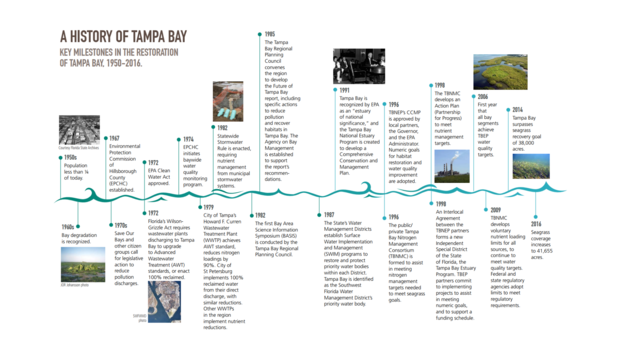 A priority of those efforts was maintaining appropriate levels of nitrogen. Excessive amounts of the nutrient leads to more algae, which reduces the amount of light able to enter the water. Algal blooms, Briceño explained, create a devastating cascading effect for marine life, as the algae changes oxygen levels as it continues to expand, and even when it dies and rots.

“It’s a mechanism that feeds itself and is continuous,” Briceño said, adding he “will not be surprised” if it happens.

Environmental officials told CBS News on Saturday that there are “visual observations” of increased algae in the water.

“Algal bloom samples have been collected in an abundance of caution and are currently being processed,” they said.

And if it does, it will also take a negative toll on seagrass, a vital plant for Tampa Bay’s ecosystem. Seagrass, along with being a vital food and habitat source for manatees and other marine life, is essential for improving overall water quality.

It’s taken decades and millions of dollars to restore seagrasses, and all it takes, Stevens said, is extra acidity to wipe it all out.

“So much of our way of life here in Florida is about our time on the water… It’s where we get outside and enjoy our lives,” Stevens said. “Scientists and advocates alike have been saying for decades that this is a problem, and polluters were not held accountable. And now, Floridians have to pay the price for their mess.”

And if the seagrass goes, it could jeopardize Florida manatees, which are a threatened species that are in the midst of an unexpected die-off event, according to the U.S. Fish and Wildlife Service. More than 600 manatees were found dead between January 1 and April 2. Between 2016 and 2020, the population averaged 203 deaths per year.

Experts believe that manatees’ access to food is a contributing factor, though not the sole reason, for the sudden die-off.

“There needs to be more studying obviously done to totally determine what are the causes of all these deaths,” Stevens said, “but what we are seeing leads us to believe that these manatees are running out of food, that they are potentially starving to death because of seagrass loss around the state.”

The Florida Fish and Wildlife Conservation Commission has made similar statements, nothing that food loss is a “contributing factor” to manatee deaths.

“Seagrass like many plants requires sunlight to grow,” the commission says on its website. “Since 2011, persistence of algal blooms has resulted in reduced water clarity and light penetration which led to a dramatic reduction of seagrass. Seagrass is the primary food for manatees in these systems.”

In the first six weeks of 2021, there were 317 manatee deaths across the state. That’s almost half of all deaths reported in Florida for all of last year. @MyFWC is investigating this huge increase in deaths. https://t.co/vVYsvmYiC4

The Florida Senate voted to allocate $3 million for the 2021-2022 fiscal year to help clean up the wastewater at Piney Point. But the funds, if they are included in the final budget, would not be available until July 1 — a month after hurricane season officially begins.

Tropical storms and hurricanes pose a larger risk to local and environmental safety around Piney Point, as strong storms could cause damage overflows in ponds and infrastructure. These storms have become more frequent and more intense over the years, and this year, the National Hurricane Center will start routinely monitoring tropical weather.

Todd Crowl, director of the Institute of Environment at Florida International University, said that while the wastewater dump into Port Manatee is bad, normally ecosystems can recover as long as they are not continuously infiltrated.

“But if you whack it once, and then you whack it again in a pretty short amount of time,” he said, “it never has time to quite recover.”

Tampa Bay, he said, “is getting dangerously close” to such a problem, and a hurricane hitting before the system can recover may create more permanent damage.

It could take months to see the full effects of the wastewater dump, but Briceño fears that the ramifications will impact South Florida’s already fragile waters.

“That’s what I am afraid that we could have in those ecosystems… that we go beyond those tipping points,” he said. “And then we don’t know what’s gonna happen, but it’s not gonna be good, for sure.”