Steve Cohen, the new owner of the New York Mets, during his introductory press conference on Tuesday voiced support for his players participating in any future on-field protests. The comments come a few months after a bizarre incident in which the team’s former general manager accused the team’s former COO of attempting to undermine the team’s protest following the police shooting of Jacob Blake.

“Listen, I think these are important questions that America is discussing,” he said. “Black lives do matter.”

“Black lives do matter…if my players want to express themselves, they’re entitled to do it.” – @StevenACohen2 pic.twitter.com/PAyofxUlSt

“If my players want to express themselves, they’re entitled to do it,” the billionaire hedge fund owner added. “Freedom of speech. The only thing I ask for is if they’re going to do it, just make sure that when you’re between the lines you give 100 percent.”

The remarks follow a season in which multiple games across several leagues, including MLB, the NBA and the WNBA, were postponed as players boycotted them to protest Blake’s shooting. Among those teams were the Mets, who, along with the Miami Marlins, came out onto the field to hold a moment of silence, draped a Black Lives Matter T-shirt across home plate, and then walked off. 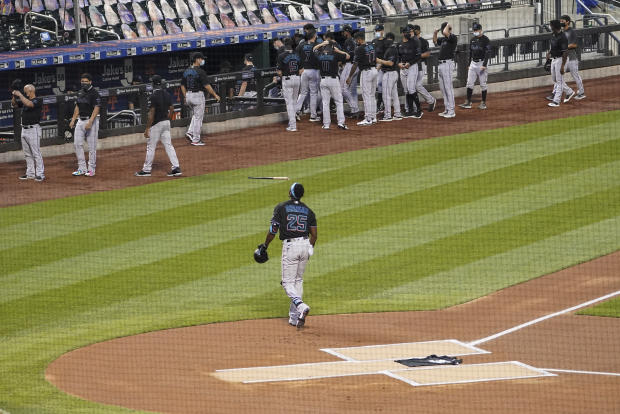 Boosted and cleaned the audio of the Brodie Van Wagenen video that’s probably all over your timeline.

Wilpon, the son of then-Mets owner Fred Wilpon, then said in a statement that he and the organization were supportive of the players’ decision.

“To clear up any misunderstandings, it was my suggestion to potentially look into playing the game later because of scheduling issues,” Wilpon said at the time. “Brody’s [sic] misunderstanding of a private conversation was and is inexcusable. We fully respect our players and the Marlins players decision to not play tonight and appreciate the sincerity of all those who wish to draw attention to social injustices and racial inequalities that must be addressed. The entire Mets organization remains committed to creating meaningful change in our society.”

Cohen’s roughly $2.5 billion purchase of the Mets was approved less than two weeks ago after he prevailed in a bidding war against a group of investors headlined by superstar singer Jennifer Lopez and former New York Yankees star Alex Rodriguez.

A lifelong Mets fan, Cohen aims to end the team’s 34-year World Series title drought in the near future.

“If I don’t win a World Series in the next 3-5 years, I’d like to make it sooner, I would consider that slightly disappointing,’ he said.