If you’re yet to hook up with Love Island Australia, the second-season teaser – featuring a group of what Derek Zoolander would call really-really-good-looking people – tells you everything you need to know.

“I’ve never had a boyfriend,” says one young woman mournfully. “My friends say I’m too pretty.” 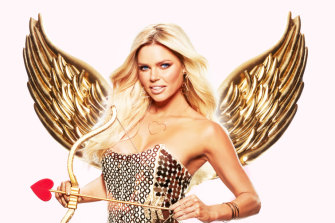 Sophie Monk returns to play cupid as host of season two of Love Island Australia, which sees a cast of attractive singles pairing off in a bid to find love and win a $50,000 prize.Credit:Nine

Suddenly, Sophie Monk drops in on this Beautiful People Support Group, cupid’s bow in hand. “Imagine an island where beautiful people fall in love with beautiful people,” she says. “Again and again.”

Like the show, the teaser is clearly extracting the urine out of itself, which is key to the appeal of what producer Majella Wiemers calls “the hottest format on the planet right now”.

But the scathing response to the clip on Facebook highlights the risk Nine is taking by moving the show from the irony-appreciating margins of its digital channel Go! to the big leagues of its main platform.

To many commenters, the trailer was seen not as a send-up of the vacuousness of people who see love as a game and reality TV as the place to play it. It was, rather, sending the wrong messages to impressionable young men and women.

Of course, it is entirely possible the show does both these things simultaneously. As an aside, it’s worth noting the people in the trailer are not actually the cast of the show; these fakes are fake.

Nine’s programming chief Hamish Turner admits that moving Love Island Australia to the primary channel is “a measured risk”. The season one premiere of the Australian version of the British format drew just 155,000 viewers on the digital channel on its launch last May, plus another 246,000 in a seemingly rushed “encore” screening on the main channel on the same night.

But over the course of its run, it began to build a strong following on Go! and Nine’s broadcast video on demand (BVOD) catch-up platform 9Now, with Nine claiming an average viewership across the season of 520,000 an episode – with almost half that number (228,000) coming from BVOD.

“We were seeing a very young audience that isn’t necessarily going to linear [broadcast television] as their primary source of entertainment,” Turner says.

In moving to the main channel, at the innuendo-friendly time of 8.45pm, Turner is hoping to lift that number significantly. “We’d be happy with 700,000 to 800,000 across the five metro capitals, plus BVOD,” he says.

But to do that the show needs to appeal to a wider audience than the under-39 female market that has been its core to date, and there’s a real risk many older viewers in particular might respond like those posters on Facebook, failing to appreciate the gag that just possibly saves the show from its all-consuming narcissism. 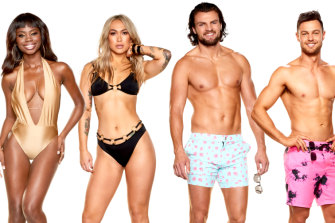 Some of the cast of Love Island Australia season two. Credit:Nine

“The big risk for us is optics,” Turner concedes. “Putting it out on the back of The Block gives us the best opportunity to broaden out that audience.”

However it eventually performs, for producer Wiemers – a former news journalist – Love Island is “a dream show” to work on, not least because each episode is filmed, edited and broadcast within a 24-hour window.

“It’s incredibly exciting – you have a format and guidelines but things can change so quickly,” she says. “It’s a difficult show, that’s for sure, but it gives you so much flexibility to make the best possible program and to engage an audience who want to be engaged.”

Key to that is the app that allows viewers to vote for which couples they think should stay together, and which contestants should be ditched.

“People feel like they’re owning part of the journey, and having a say in the romantic relationships that are unfolding,” she says. “It’s next level when they can be not just commenting but also affecting the outcome.”

The winning couple stand to take home $50,000 – unless, that is, the one who has been given the option of keeping it all to themselves decides to do the dirty on their partner.

Remarkably, love does apparently happen, despite the 24/7 gaze of 60 cameras, the whims of the voting public and the manipulations inherent in any reality TV production.

Just ask Josh Moss, the 26-year-old former rugby league education officer who spent the first part of season one desperate and dateless before finishing in third place with Amelia Plummer, with whom he is still romantically involved a year later.

“I truly went in there trying to find a partner, someone I was going to fall in love with,” says Moss. “I thought I’d exhausted every other option in trying to find a girl so why not try a reality show. 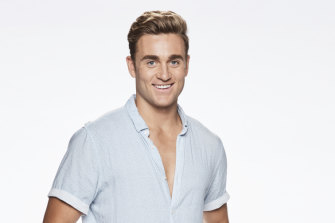 Season one contestant Josh Moss has absolutely no regrets.Credit:Nine

“I know that sounds cliched but I truly did. I liked the idea of being in front of the camera, being in the media world – that was in my mind a little bit – but my main objective was to try and find love.”

For him, the experience has been nothing but positive. He now has a thriving career doing endorsements and ad campaigns, is earning more than he did before starting the show, and has a relationship that has survived, he says, by virtue of the fact he and Plummer consciously slowed things down once they were out of the hothouse.

Not everyone is so lucky, which is why Wiemers says the production offers a range of psychological support for up to 14 months after filming begins. “That’s so that if the show goes to another series they can deal with any issues that might bring up,” she explains.

But Moss reckons the most common complaint of former reality contestants is easily dealt with.

“Some people think they got a rough run with the editors but at the end of the day if you did it or you said it, it’s not the editors’ fault they put it out there,” he says.

The best bit of advice he got before starting the show was the one by which he tried to live, he adds. “If you don’t want to look like a dickhead, don’t say dickhead things.”

Love Island Australia is on Nine from October 7, Monday to Friday at 8.45pm. Nine is the publisher of The Age and The Sydney Morning Herald.