Mother whose son, 14 months, has rare uncombable hair syndrome that makes his blonde mop stand on end reveals his water-resistant locks are EASY to take care off and only need washing once a week

A mother has revealed how her baby is one of around just 100 people in the world diagnosed with the ultra ‘rare uncombable hair syndrome’ – but she is teaching him how to be proud of his unruly locks.

Katelyn Samples, 33, from Atlanta, Georgia is mother to Shepard, two, and 14-month-old Locklan.

When Locklan was around five months old and his hair started to grow, Katelyn and husband Caleb, 33, noticed it was quite fuzzy and thought it was going to be curly.

‘It was coming in straight up and so soft and fuzzy,’ Katelyn recalled. 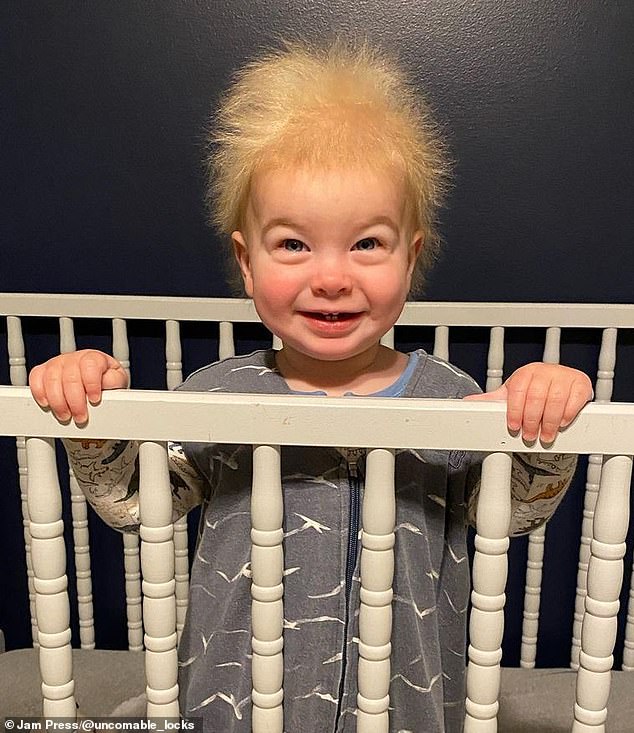 Locklan’s fuzzy hair that his parents thought would eventually lead to curly locks, but instead they found out he has ‘uncombable hair syndrome’ 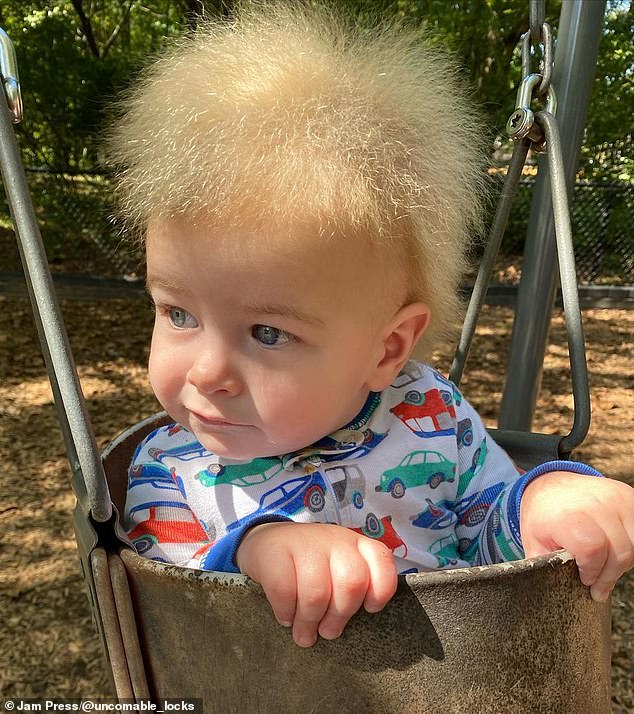 ‘As it continued to grow it never laid down… a lot of people who see him call him a baby chick.’

Then during the summer, a stranger messaged Katelyn to ask if he had something called uncombable hair syndrome.

Katelyn had never heard of the rare condition, which causes a rare structural anomaly of the hair meaning it can’t be brushed or flattened down, no matter how hard you try.

The condition is extremely rare with around just 100 cases worldwide, and some believe Albert Einstein’s famous ‘mad scientist’ look was because he had UHS. 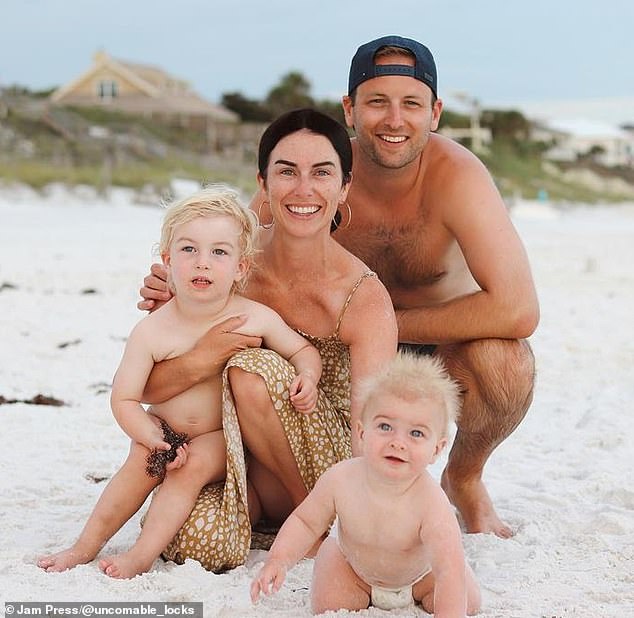 The Samples family: Locklan, centre bottom with his older brother, Shepard behind him, with their parents

Katelyn said: ‘Because UHS is so rare our paediatrician referred us to a pediatric dermatologist/specialist at Emory in Atlanta, Georgia.

‘They took samples of his hair and called us a few weeks later and confirmed it was in fact, Uncombable Hair Syndrome!

Uncombable Hair Syndrome: The condition that was made famous by Albert Einstein

Uncombable hair syndrome is a rare inherited disorder that causes locks to stand up from the roots and not be flattened.

Such hair is usually silvery-blond or straw colored.

The hair usually appears between three and 12 months of age.

In rare cases, the syndrome has occurred alongside bone and eye abnormalities.

The syndrome usually resolves or improves at the onset of puberty.

It may be more manageable through applying conditioners and using soft brushes.

‘His doctor had only seen one other case in the past 19 years. We have zero clue why he has it.’

Although UHS usually only affects the hair, Katelyn was still concerned about the diagnosis.

She said: ‘Hearing your son has a genetic condition isn’t easy, especially because it’s so rare there isn’t a lot of information on it. But as I learned as much as I could and connected with other parents around the world (in a UHS FB group), I became less scared and more appreciative of how unique Locklan is.

‘Other than wild and crazy cool hair, he is perfectly healthy and very happy He does have severe eczema, which may be linked to UHS.’

At the minute, because Locklan is still young and his hair is short, his hair routine is pretty simple, and his parents have found that the unique texture actually means it’s easier to keep it clean.

Katelyn said: ‘His hair doesn’t need to be washed much… maybe once a week.

‘It’s water-resistant so it takes a minute to saturate with water and gentle shampoo.’

His distinctive mane does attract attention when they are out and about – but usually, he doesn’t mind.

Katelyn said: ‘Lock is already a little celebrity. People come up to us everywhere we go.

‘They ask about his hair, and sometimes even ask to touch it! At a fall festival in a local town people even asked to take pictures with him. He enjoys the attention.

‘We really can’t go anywhere without at least one person making a comment on his hair. It is almost always from a good place!

‘However the mean/rude/sarcastic comments happen too and it breaks my heart.’ 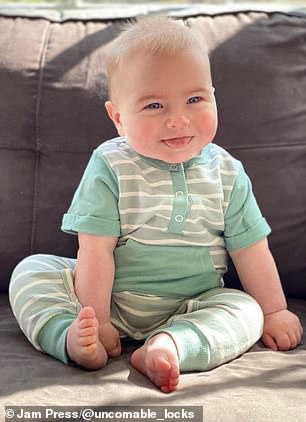 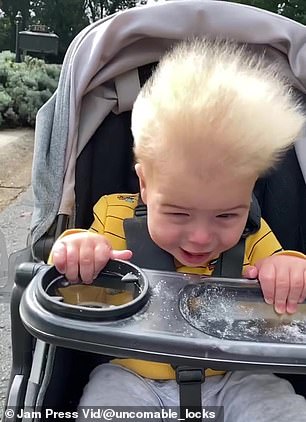 His mother has revealed that the 14-month-old’s hair has been getting a lot of attention, from kind comments in real life to mean ones online. She’s heard people say his hair looks like he stuck his finger in an electrical socket 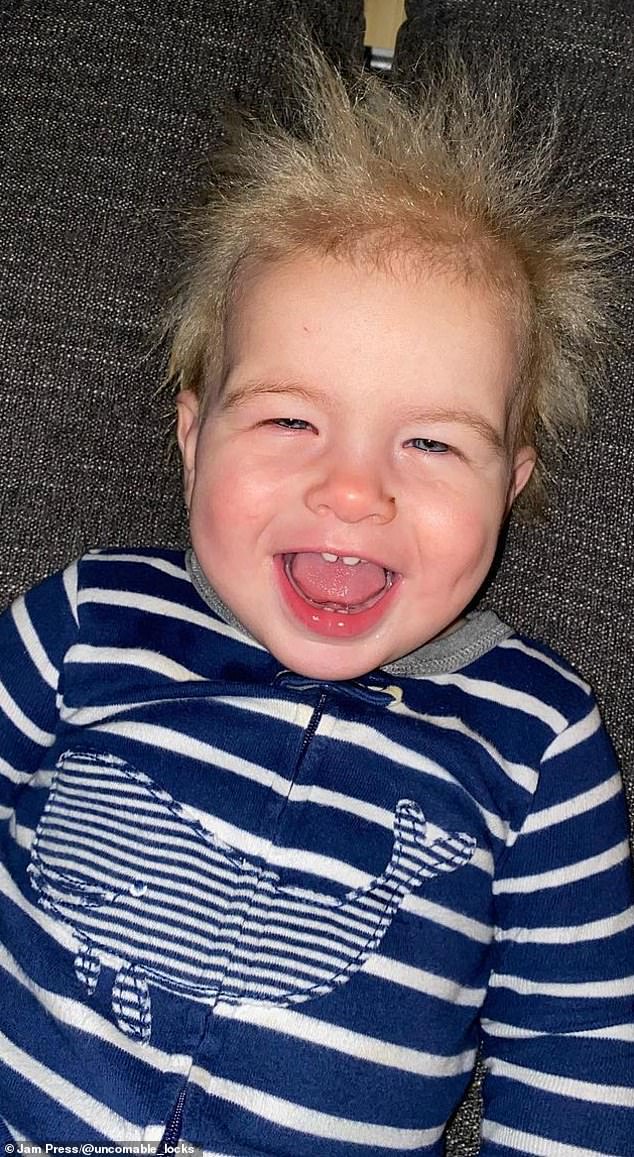 Strangers have compared Locklan’s locks to of a cat when it’s scared, but his mother insists that it’s nobody’s business because they’re not the ones dealing with it 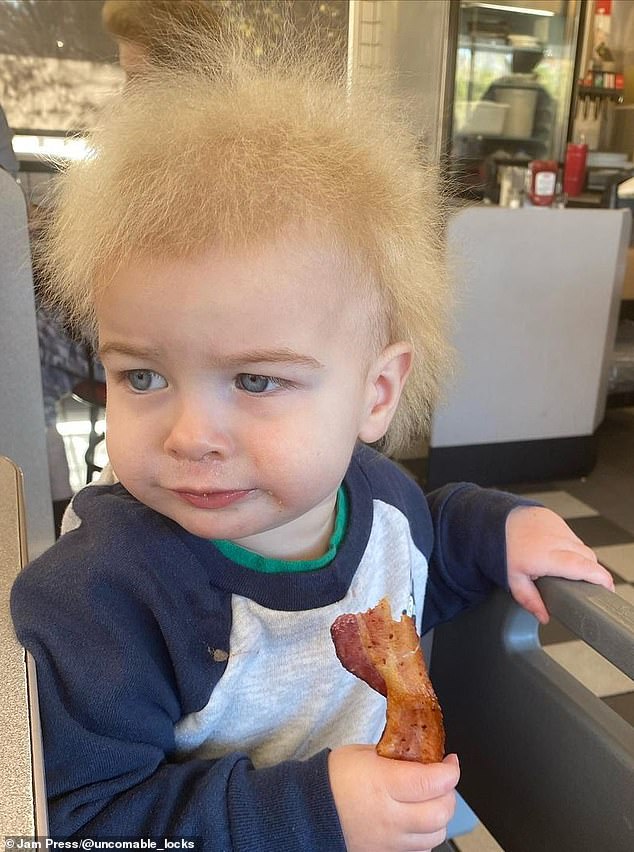 Some of the comments Katelyn says they’ve heard include people calling it ‘crazy’ or saying he ‘looks like he stuck his finger in a socket’.

Other people say things like “Wow his hair makes me happy”, “He looks like my cat when its scared”, and “That baby wakes up every day with a bad hair day”.’

Katelyn added: ‘For now myself and my husband are the only ones to have to deal with it but as Lock gets older he will too.

‘Lock’s hair is truly a source of joy and we celebrate it. I want him to grow up to be proud of his differences and what makes him unique.. everyone should!’

The baby boy with the cool hair: Locklan’s parents didn’t know what to expect when their son’s hair was growing 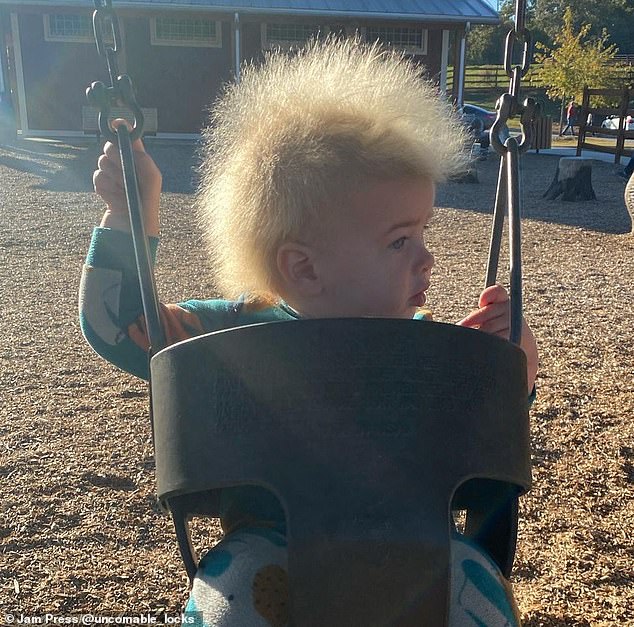 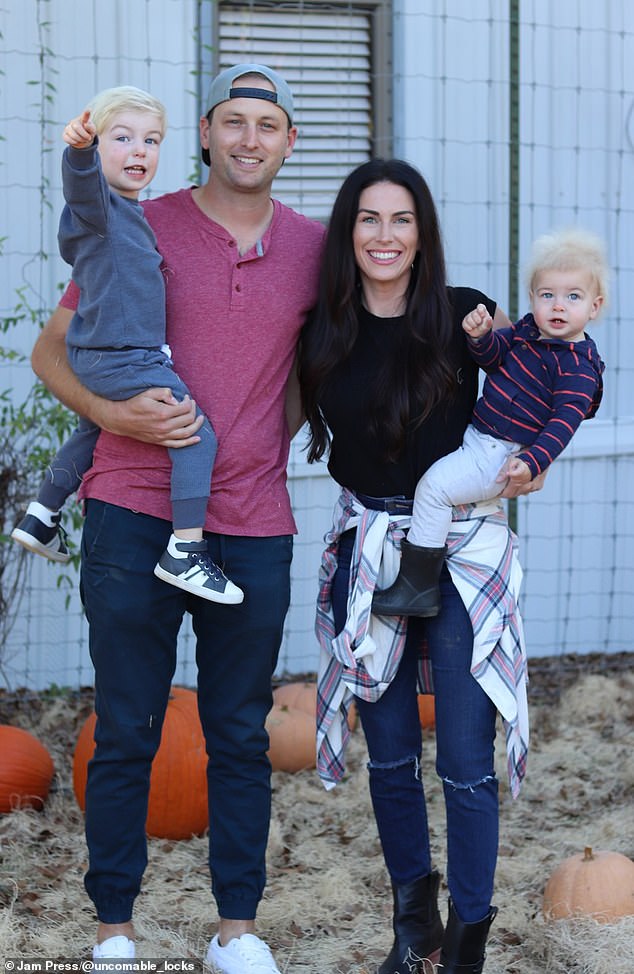 Katelyn said: ‘We set up his IG account because people truly are so intrigued by his hair and love it so much we wanted to raise awareness of such a rare genetic disease.

‘My husband is very creative and came up with his IG name and set up the account!’

‘Between his hair and his smile we wanted to spark some joy on the internet.’