In the dog house! Owners share snaps of their pets looking guilty after being caught misbehaving – including a naughty pair who chewed through a DOOR

These pets appear to know how to get away with being naughty – by pulling adorable ‘guilty faces’.

Owners from around the world took to social media to share photos of their animals pulling very cute expressions after being caught misbehaving.

The innocent puppy eyes captured in most of the images no doubt resulted in the owners forgiving their badly behaved bets.

Collated by Bored Panda, one amusing photograph showed two dogs peeking through a broken door with innocent looks, despite being the culprits. 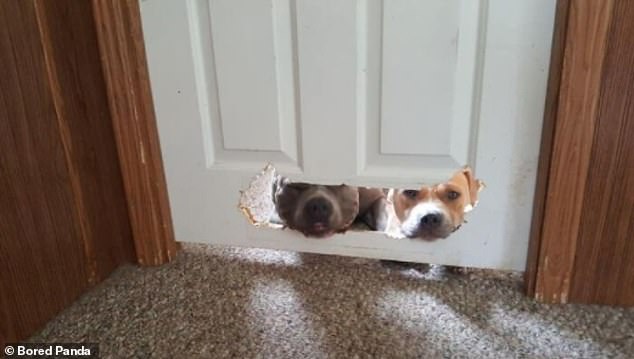 Collated by Bored Panda, one amusing photograph showed two dogs peeking through a broken door with innocent looks, despite being the culprits (pictured) 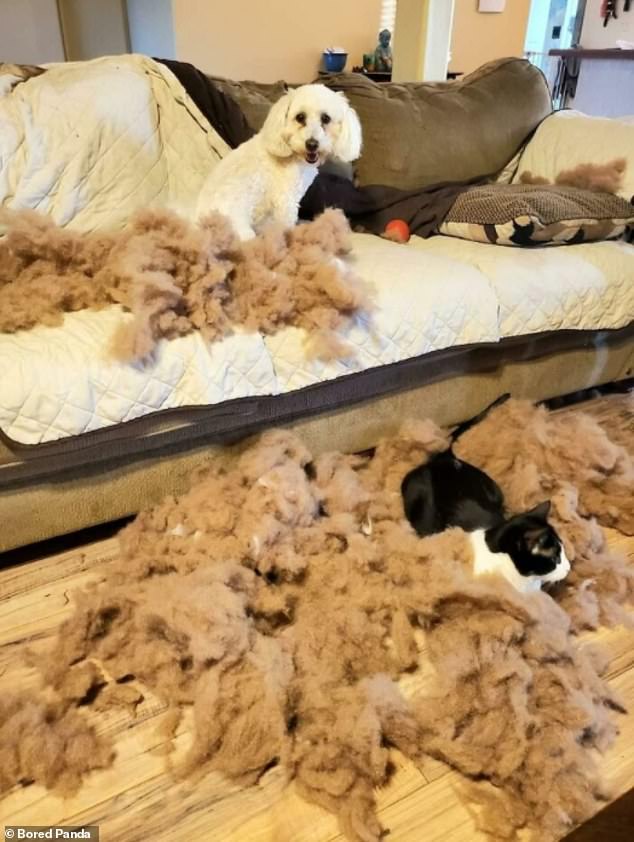 It wasn’t me! This dog failed to hide its guilt after its owner discovered its trail of destruction in the family’s living room 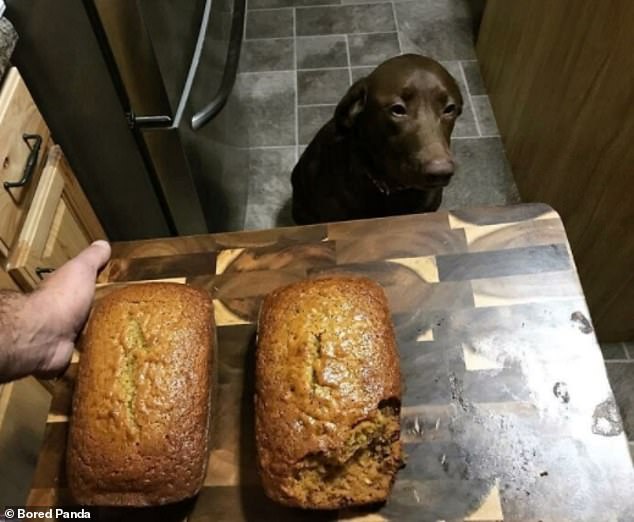 Fur shame! This owner called out their naughty pet and left it pulling a very cute face after discovering the dog had taken a bite out of the homemade cake sitting on the kitchen side 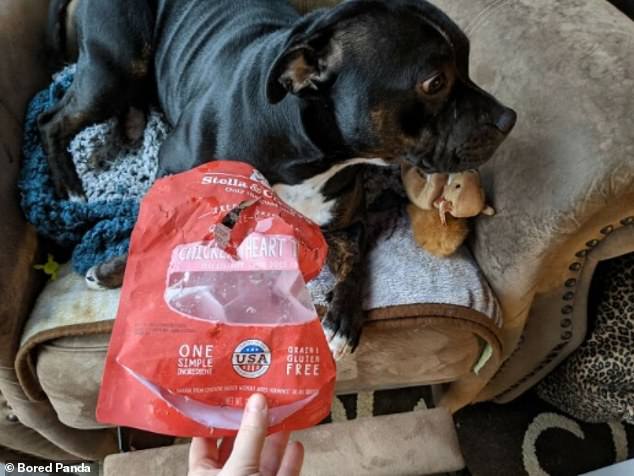 Bad doggy! This pet had the guilt written all over its face when its owner showed it the empty packet of food it had sneakily eaten 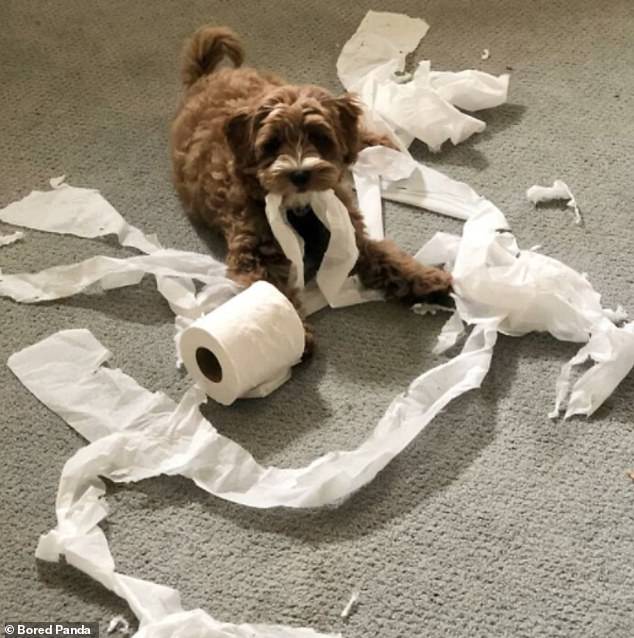 Whoops! One adorable dog was the picture of innocence even with the ruined toilet roll still hanging from its mouth 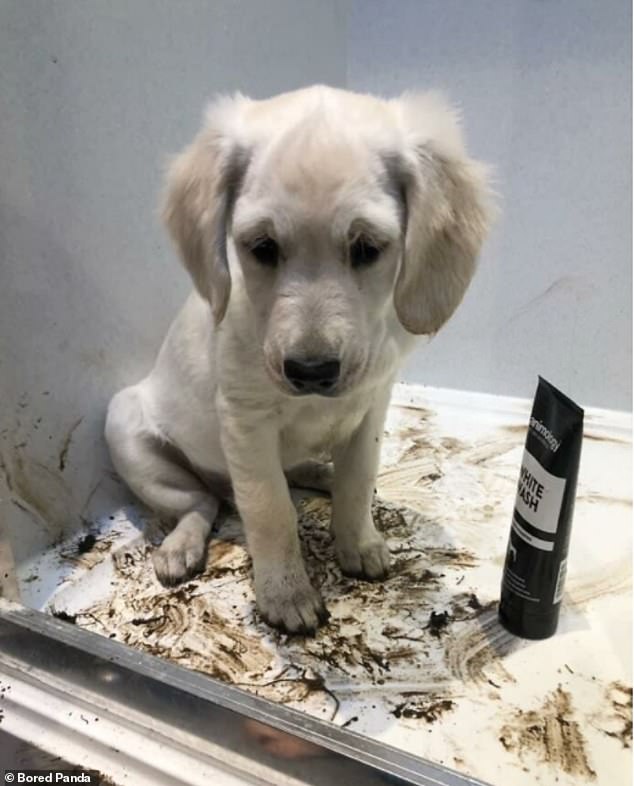 Oh no! This little puppy appeared to scream ‘I’m sorry’ with its facial expression after leaving a mess in its owner’s bathroom 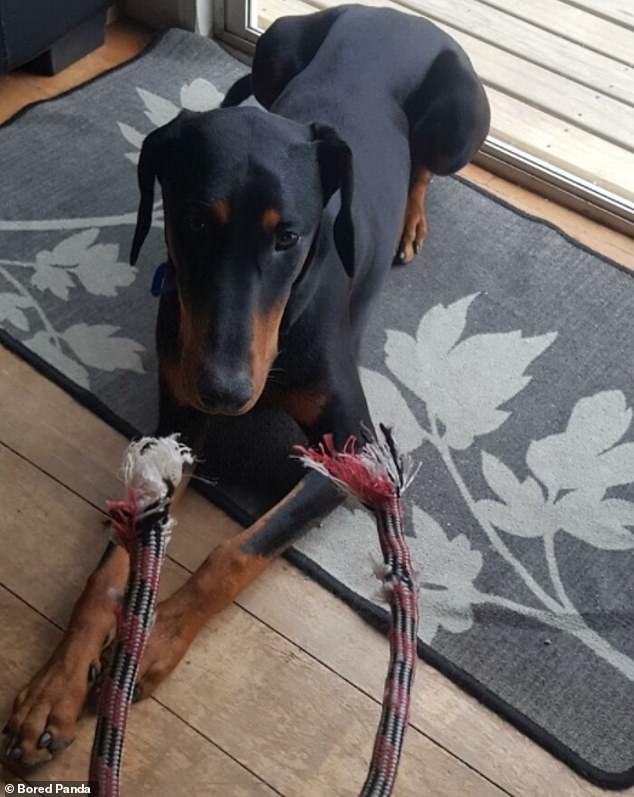 Does my face look bothered? This dog appeared less than impressed after its owner showed the destruction it had left behind 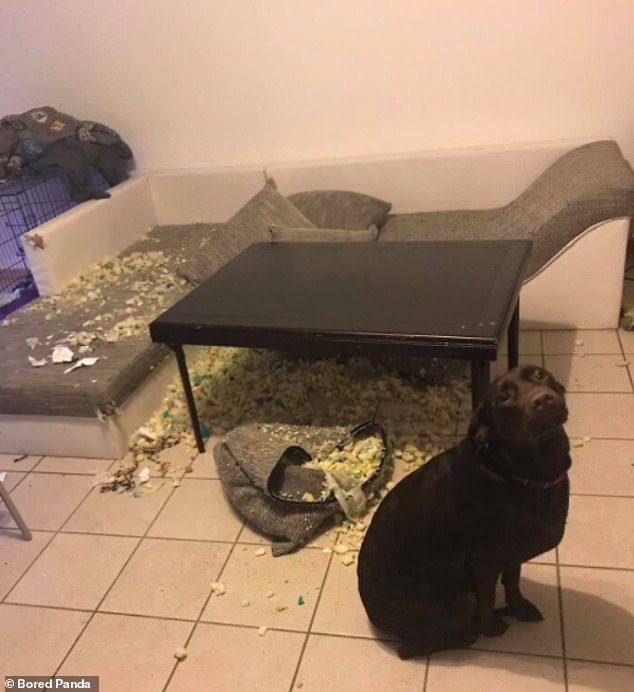 Butter wouldn’t melt! One social media user revealed how their guilty-looking pet totally ruined their sofa when they weren’t looking 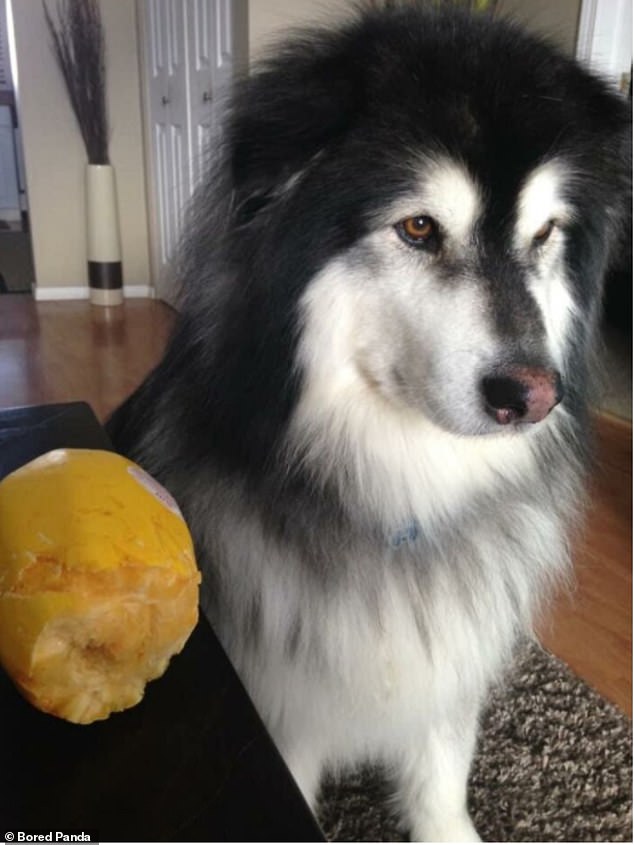 Playing it dumb: This animal appeared to have no idea what its owner meant when they started blaming it for the eaten products 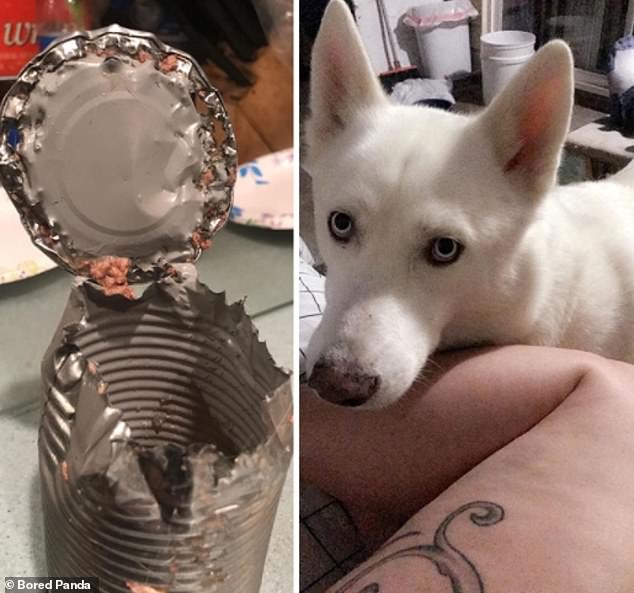 Puppy eyes: This dog attacked a tin of food but was all about looking guilt-free when questioned by its owner 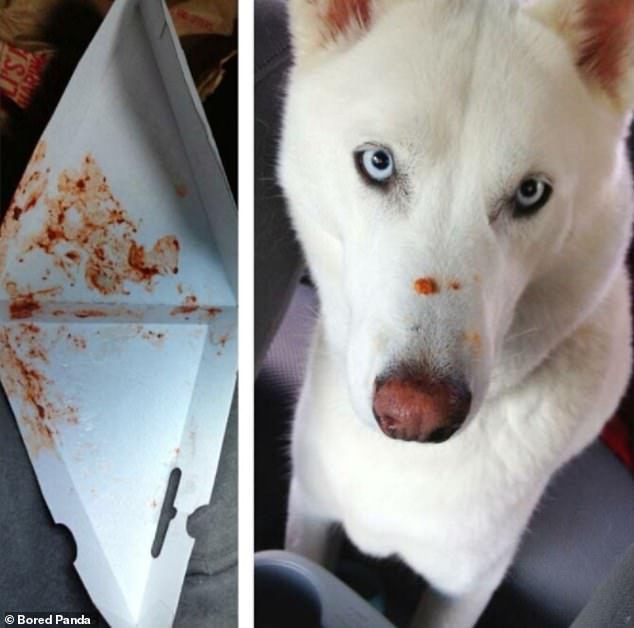 When in doubt, play it dumb! This dog attempted to hide the evidence after ploughing its way through a pizza and making an almighty mess, but left a tiny piece of the food on its nose 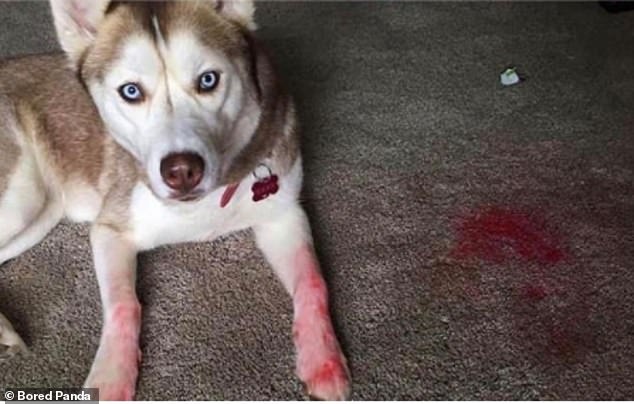 Scene of the crime: This adorable dog brazenly stayed where it was after destroying its owner’s lipstick 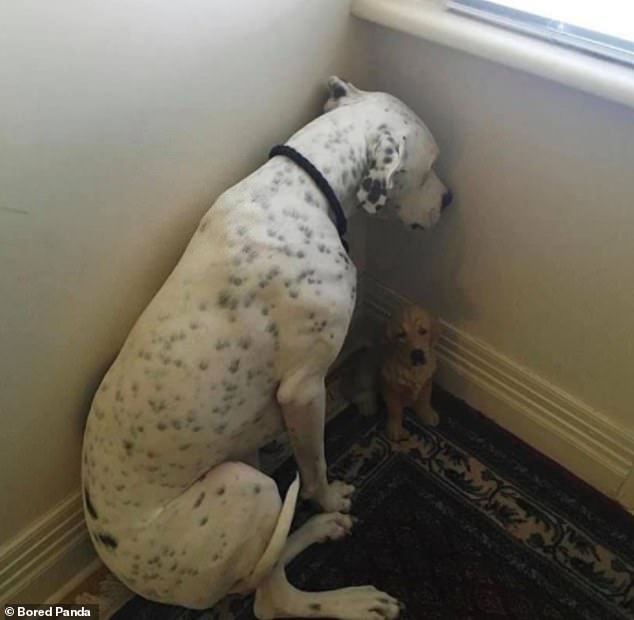 Don’t mind me! This very cute dog took itself to the naughty corner after misbehaving, while wearing a saddened face 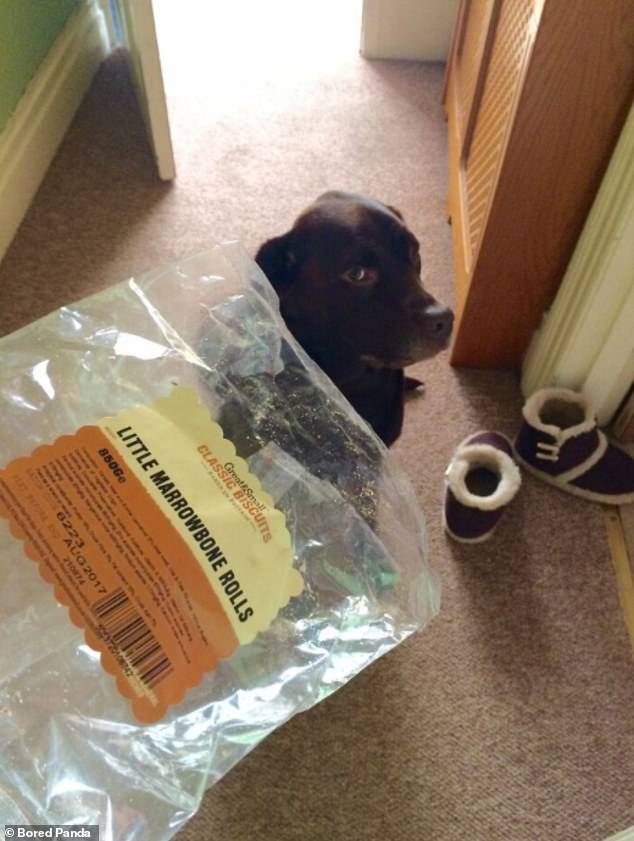 Busted! This dog tried desperately not to look at its owner when being presented with the empty packet of food it had devoured