Paramount Plus arrived on our shores earlier this month, bringing the number of available streaming platforms in the Australian market to roughly … urgh, who can keep count anymore?

Not that we can be mad about it – Australia is clearly a nation of keen streamers. According to recent research from Finder, nearly 90 per cent of us use at least one TV streaming service.

But there is such a thing as too much choice, so rather than spend another evening plagued by indecision consider this guide a shortcut to a more streamlined streaming experience.

NETFLIX
Drawcards: Home to high-profile original programming including the must-see series The Crown, Bridgerton, House of Cards, Sex/Life and Stranger Things, Netflix remains the most influential platform globally. Thanks to deep pockets it boasts the largest library of films and TV series.
Shortcomings: No free trial for new users.
Price: $11 – $20

STAN
Drawcards: Owned and operated by Nine (publisher of this masthead), Stan produces loads of local content. It also has distribution deals with major international studios like Hulu, Showtime and MGM, ensuring series like The Handmaid’s Tale, Better Call Saul and Yellowstone are available to users.
Shortcomings: The range of 4K content on offer pales in comparison to Netflix.
Price: $10 – $19

BINGE
Drawcards: An offshoot of Foxtel, Binge is the best place to access HBO content in Australia, which makes it worth the price of admission alone to watch buzzy series like Succession and The White Lotus and old faves including The Sopranos and Game of Thrones.
Shortcomings: No 4K streaming option.
Price: $10 – 18

AMAZON PRIME VIDEO
Drawcards: At $6.99 per month or $54 annually, Prime Video is less than half the price of Netflix or Stan and, like the others, is producing binge-worthy original content. See: Nine Perfect Strangers.
Shortcomings: Smaller library than its competitors.
Price: $7

The best of the rest

APPLE TV+
Drawcards: Cheap and cheerful, Apple already controls the rest of your life; why not hand over the remote? The familiarity of the Apple TV interface makes it easy to navigate.
Shortcomings: It’s light on original prestige content with Morning Wars and Ted Lasso the only real standouts.
Price: $8 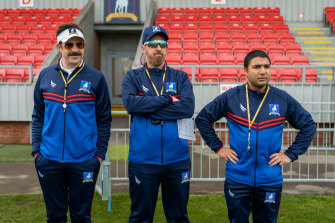 Ted Lasso stars Jason Sudeikis as a hapless American football coach who finds himself in charge of an English Premier League team.Credit:

DISNEY+
Drawcards: Disney owns Marvel, Pixar, Star Wars, National Geographic and 20th Century Fox, so there is literally something for everyone on the service. It’s the only place to catch top-tier telly like The Mandalorian and WandaVision.
Shortcomings: No free trial and, at $12 a month, one of the more expensive platforms.
Price: $12

PARAMOUNT PLUS
Drawcards: Access to programming from the likes of Comedy Central, Nickelodeon and MTV, Paramount Plus offers a decent variety. Will be home to the much-hyped reboots of both Frasier and Dexter.
Shortcomings: Heavy on reality TV and light on drama.
Price: $9

SBS ON DEMAND
Drawcards: Delivering over 7000 hours of content, SBS on Demand is a solid option. Best for documentaries, world movies and the odd Scandi-noir series.
Shortcomings: Sadly, you have to sit through ad breaks.

ABC iVIEW
Drawcards: As well as housing all your favourite Auntie programs in one place, ABC iview also hosts an impressive array of movies, documentaries, and comedy specials.
Shortcomings: The app can be susceptible to crashing.

BRITBOX
Drawcards: One for the nostalgia-fiends, Britbox is your one-stop shop for classic English comedies and dramas; Midsomer Murders, Fawlty Towers, The Office, Doc Martin, Line of Duty, the list goes on.
Shortcomings: There is very little original or new content.
Price: $9

HAYU
Drawcards: If you want to keep up with the Kardashians, or any reality TV show for that matter, HayU has you covered.
Shortcomings: See above.
Price: $7

DOCPLAY
Drawcards: You won’t find a wider variety of documentaries across a vast array of subjects available on any rival streaming service. There’s loads of Louis Theroux.
Shortcomings: Only for the doco-obsessed.
Price:$8 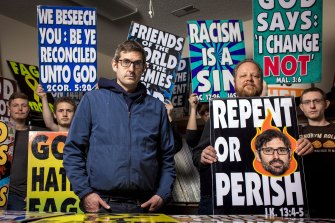 KAYO SPORTS
Drawcards: With more than 50 sports to pick from, Kayo is a Foxtel-free way of enjoying live sport. Access to blue-chip sports including NRL, NBA, cricket, as well as niche sports like darts.
Shortcomings: Pretty pricey and no 4K option.
Price: $25