The peak tourism agency, Destination NSW, failed to hire any Indigenous staff members in nearly a decade despite boasting about the success of its Aboriginal cultural tourism programs.

The government body has a target for 3.3 per cent of its workforce to be Aboriginal or Torres Strait Islander. However, it won’t say if any First Nations persons have ever been employed. 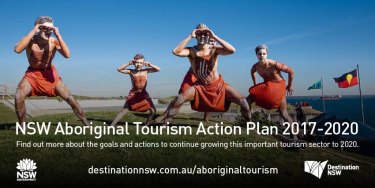 An advertisement for Destination NSW’s most recent Aboriginal Tourism Action Plan, posted to its Facebook page.

Destination NSW says its NAIDOC Week involvement is an example of its celebration of diversity, but its latest annual report says “0.0 per cent” of its current staff are Indigenous.

Previous annual reports reveal that the agency hasn’t employed an Indigenous person since at least 2012, the year after the agency was created.

“Destination NSW welcomes and encourages applications from all groups including Aboriginal and Torres Strait Islander people, LGBTQIA+, people with disability, women and other diversity groups,” the latest annual report reads.

"We will continue to support staff to acknowledge and celebrate diversity, with involvement in NAIDOC week, LGBTQIA+ celebrations, charity fundraisers, and to role model behaviour in line with the Destination NSW values." 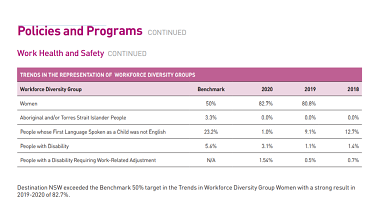 When asked if Destination NSW had ever hired an Indigenous person, a spokeswoman for the agency disregarded the question.

“As a government agency Destination NSW works across government and in collaboration with partner agencies, industry and Aboriginal cultural tourism operators,” she said.

If the agency were to meet its 3.3 per cent Indigenous employment target, at least seven of its current 199 employees would need to identify as Aboriginal and/or Torres Strait Islander.

The chief executive of the Diversity Council of Australia, Lisa Annese, told the Herald that targets need to be supported by systemic change and executive accountability to be effective.

“Having the target is useful because it certainly focuses the attention of the entity on what it wants to achieve,” she said.

“The target needs to be supported by accountability … but that’s still not enough, you actually need to unpack what the blocks and the barriers are.” 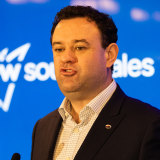 Asked if he was concerned that the peak tourism body appeared to have never employed an Aboriginal person, Tourism minister Stuart Ayres issued a statement, saying: “All public sector departments and agencies need to work together to progress towards our targets in the NSW Public Sector Aboriginal Employment Strategy 2019-2025.”

Labor’s spokesman for Aboriginal affairs David Harris argued that the lack of First Nations people in Destination NSW’s workforce was troubling, given that the agency has been responsible for overseeing two plans to expand the Indigenous tourism sector.

In the ministerial message at the start of the strategy document, former tourism minister Adam Marshall boasted of the success of the state’s $1.4 billion Aboriginal tourism sector, after it overtook Queensland as the most popular market for international visitors.

“NSW is now the most popular State in Australia for international travellers to experience Aboriginal cultural tourism, with the sector growing by nearly 60 per cent in visitor participation in the year ended June 2017,” he wrote. 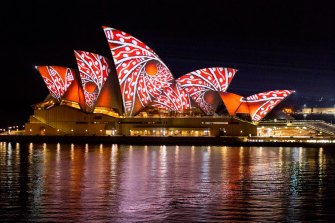 An image posted to Destination NSW’s Facebook and Instagram accounts in 2017 when it announced NSW had become the most popular Aboriginal tourism destination for international visitors.

Destination NSW did not answer questions about whether it was concerned by the effectiveness of its Aboriginal tourism strategies given its lack of Indigenous employees to work on them internally.

Meanwhile, Labor has raised questions over an Indigenous traineeship program previously run at the agency.

But the same annual report also states that there were zero people employed on a training basis at the time.

The 2014/15 annual report said two Aboriginal trainees had worked at the agency during that reporting period. The report later goes on to say that zero training staff were employed at the agency in 2014/15, and one was employed in 2013/14.

Mr Harris said he was concerned the agency had simply run a “tick a box” exercise rather than a program that would create genuine employment opportunities for Aboriginal people.

“It would seem from their annual reports that even if they did have people involved in that internship program none of them went on to get full-time employment,” he said.