Record numbers of Australians are working at least two jobs as signs grow the lockdowns across NSW and Victoria is causing substantial damage to the work prospects of millions of people.

In some industries, up to one in 10 people have multiple jobs with the large increase suggesting the entire jobs market was not as strong as believed before more than 15 million people went into lockdown. 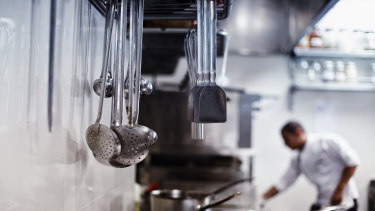 A record number of people are holding down at least two jobs in sectors such as hospitality, the arts and recreation.Credit:iStock

Unemployment fell to 4.6 per cent in July, although the timing of the jobs survey and a sharp drop in the number of people actively looking for work distorted the true impact of pandemic-related lockdowns across the east coast.

The Australian Bureau of Statistic’s report into the total labour market for the June quarter, however, gives some insights into how employment opportunities have been affected by COVID-19.

It showed by the end of June total employment – which includes people with more than one job – was still almost 222,000 down on its pre-pandemic high of 13.5 million.

And the overall number was boosted by the lift in multiple job holders, which hit a record high of 6.5 per cent or almost 868,000 in the quarter.

Some industries do not lend themselves to multiple job workers. Across the mining and utilities sector combined there were fewer than 7000 workers with at least two jobs.

But in a sign of the impact of the coronavirus, there has been a surge in multiple job holders in industries hardest hit by the pandemic lockdowns.

One in 10 arts or recreation workers holds down at least two jobs while 5.2 per cent in retail – or more than 74,000 people – are also juggling at least two employers, an industry record. Another 84,600 people in the hospitality sector have at least two jobs, the highest number on record.

Many of these sectors have depended on migrants, particularly international students, over the years for their workforces. But there has been an increase in multiple jobs across other sectors including education and training, which has 80,000 people on at least two payrolls.

CommSec senior economist Ryan Felsman said lockdowns and restrictions on movement had affected the ability of some occupations and regions to get the workers they needed, contributing to the increase in multiple job holders.

“The pandemic impact on supply chains and varied demand for goods and services across the economy could also be a key factor. Of course, the rise of the ‘gig’ economy and a preference for younger and even older Australians to work more flexibly may mean they work multiple jobs at once,” he said.

Separate figures from the National Skills Commission, released on Wednesday, showed how the jobs market is being rocked by current lockdowns.

There was a 5.6 per cent or almost 13,000 drop in skilled job vacancies in August, the largest monthly fall since last year’s early nationwide lockdowns. Since May, they have fallen by more than 10 per cent.

Despite the drops, skilled ads are still almost 56 per cent up on a year ago.