Liberal MPs were so concerned federal cabinet would cave to demands from the Nationals on climate change policy they formed a secret group to push Prime Minister Scott Morrison on the issue, raising the prospect of crossing the floor in Parliament.

Worried the Nationals would block a crucial pledge to cut greenhouse gas emissions to net zero by 2050, the Liberals mobilised in a meeting with Mr Morrison on September 28 to make it clear they could not accept a climate plan without the target. 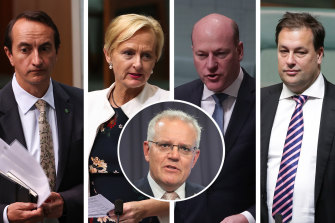 Liberal MPs warned Treasurer Josh Frydenberg ahead of the meeting that they would have to consider their positions if the government retreated on net zero in the face of protests from Nationals leader Barnaby Joyce and conservative commentators.

“Nobody was talking about moving to the crossbench, but people were talking about reserving their positions, absolutely,” said one of the 18 backbenchers on the Zoom call with Mr Morrison and Mr Frydenberg.

Another MP said several of them contemplated a show of public support for net zero on the floor of the House of Representatives if the cabinet rejected the net zero 2050 target, with options including a vote on a motion on climate change.

“If we didn’t get it, people might have considered their options,” said a third MP.

All spoke on condition of anonymity because they were revealing private talks with the Prime Minister.

A victory for the Nationals in blocking the net zero pledge would have set up an opportunity for Labor to move a motion in Parliament to endorse the target, a scenario the Liberals anticipated in the knowledge they would have to support the motion and vote against a federal cabinet decision.

With Mr Joyce and other Nationals ministers warning against stronger action on climate change, the Liberal group drafted a letter to Mr Morrison last month that called for net zero by 2050 and credible interim targets to show how the goal would be met. 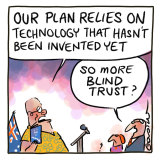 The group held weekly Zoom calls to co-ordinate their strategy on climate, hosted by Jason Falinski, the member for Mackellar in northern Sydney, before seeking the meeting with the Prime Minister through requests from Trent Zimmerman, the member for North Sydney, and Dave Sharma, the member for Wentworth in eastern Sydney.

Mr Sharma drafted the letter to Mr Morrison on behalf of the group and told the Prime Minister it was being signed by most of the Liberals, but the meeting was arranged for September 18 before the letter needed to be sent.

An updated version of the letter was sent after the meeting to confirm the call for net zero and put the group’s view on the record within the government.

Another Liberal backbencher, Katie Allen, the member for Higgins in Melbourne, told Mr Morrison at a dinner with Victorian MPs at The Lodge in August that climate change was the major issue in her electorate and needed a greater commitment from the government.

Mr Morrison signalled his support for the stronger target in April in a speech to the Business Council of Australia where he backed net zero “preferably” by 2050 – a position that reassured Liberals he would set the goal even though Labor attacked his language as too soft.

It was also clear to federal ministers that allies such as the United States and United Kingdom expected Australia to adopt the target, while Trade Minister Dan Tehan reported to colleagues about similar views in Japan and other neighbours after his visits to the region this year.

Like Mr Frydenberg, Mr Tehan argued global markets would increase financial costs for Australia if it did not move to net zero emissions.

Several Liberals said Mr Morrison heard this message at the G7 summit in Cornwall in June and meetings with US President Joe Biden and British Prime Minister Boris Johnson in New York in September.

“There is a serious concern, especially with the US, that we end up as a sort of second-order country if we’re not at the table on this issue,” said one. “That’s the last thing we need at the moment.”

The Greens have slammed the 2050 pledge as too weak and Labor has taken aim at the Liberals who helped to get the outcome.

Labor frontbencher Ed Husic argued the Liberal moderates helped a government that did too little on climate because of the power of the Nationals and conservative Liberals.

“The only way, if you’re a Liberal voter and you want to see climate change taken seriously, the only way you’re going to see that change is to vote out Katie Allen, vote out Dave Sharma, vote out Tim Wilson… maybe give Trent Zimmerman a shake, because I like him,” Mr Husic said on Sky News this week.

“You’ve got to give them a dose of the eternal Heebie Jeebies for them to take this seriously,” Mr Husic said.

Get daily updates on the climate summit that will shape our future. Sign up to our COP26 newsletter here.