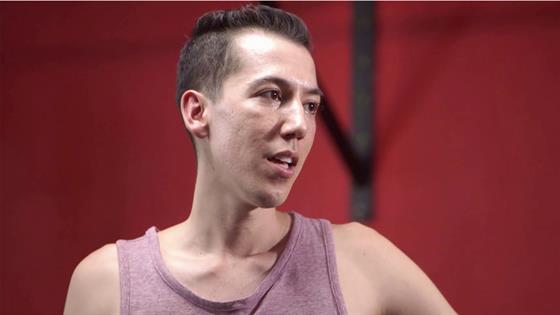 Eddie knew how to be thin. Healthy was a different story.

“I feel like eating’s a chore. Like, I don’t like eating,” he told personal trainer and lifestyle coach Ashley Borden during Sunday’s new Revenge Body With Khloe Kardashian. At the time, Eddie had just begun his 12-week turn on the transformation series and was in the midst of his first gym session with Ashley. After asking him to hop on the scale, she determined that he was not eating anywhere near enough food.

“I’m being totally serious,” she told him. “This is almost like you’re starving yourself, honey.”

As Eddie explained to Khloe Kardashian earlier on in Sunday’s episode, he’d struggled with eating disorders and body image issues for most of his life. Now, as an adult, he told the host, “I want to be healthy. I want to be fit. But I don’t feel like I have the confidence or the tools to get there.”

Fortunately, providing the new participant with those tools is exactly what Khloe, Ashley and the rest of the Revenge Body team had set out to do. The fact that Ashley herself had “25 years recovery from every eating disorder”—as she told Eddie later during their first workout, strength training was at the root of her healing process—and could relate to his story proved especially helpful.

“You have to trust the process of eating the food and lifting,” she told her new trainee, after setting him up with a comprehensive meal plan to follow. “Do you feel like you’re ready to change your life?”

Of course, the path to change was not all smooth-sailing. At three weeks in, Eddie was feeling overwhelmed and wasn’t sure he’d be able to continue his Revenge Body journey.

“I feel like this might be the end,” he told Ashley during an emotionally-charged outdoor training, before later explaining the crux of his anxieties to the Revenge Body camera. “I’m scared that end the end of this I’m gonna hate my body more than when I started,” Eddie admitted. “I don’t know what that end result is gonna look like. And the fear of the unknown is really getting to me. I’m just so nervous to fail.”

Luckily, Ashley was able to convince him to stay.

“You need to give it some time,” she told Eddie gently. “It’s about trusting the process of this.” 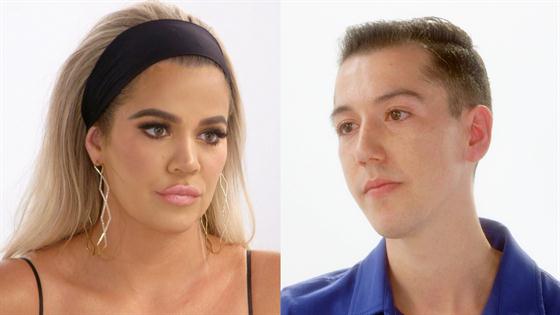 Nine weeks later, it was obvious he’d taken her advice to heart. As he walked into his final training session with Ashley, Eddie—who gained 38 pounds of muscle throughout his time on the show—was toned, smiling and noticeably more energetic than before.

“I feel so much healthier. I’m so much happier. I’m literally glowing,” he gushed, while viewers watched him finish his last workout with admirable ease. But when he sat down with Khloe before his big reveal, it was Eddie’s newfangled sense of inner strength that felt like the most meaningful win here.

“I realized how much I had lost myself,” he told her honestly. “And now that I’m here, I feel like I’ve really found myself again. And I’ve found that spark. And the confidence isn’t fake, it’s real.”

Eddie put his strength and self-assurance to the test on reveal day when his ex-boyfriend Eric showed up. As Eddie recalled to Khloe at the very beginning of his journey, Eric was his first love and he still cared for him a great deal. But Eric’s intermittent unfaithfulness throughout their relationship (not to mention the fact that he continued to reach out to Eddie and made periodic passes at him post-breakup) pretty much only served to weaken his sense of self.

“Now I know I deserve more and I don’t need to fight for approval from anyone because I am proud of myself and I love myself,” he told Eric at the end of this week’s episode, before redefining their relationship dynamic on his own terms.

“I was also going back and forth about, if at the end of this conversation I wanted you in my life anymore,” Eddie continued. “I think we can be good friends and I think we can fix this relationship. Not in a romantic sense—we’re not getting back together—but I think we could move forward as friends.”

After apologizing for being “a jerk” (Eric’s own words), Eddie’s ex said he’s “committed to a good friendship” and is “grateful” Eddie still wants him in his life. “I’m proud of you,” he finished.

Pride, in general, was definitely the prevailing sentiment floating around the room during Eddie’s reveal. Speaking about his path to health and happiness, the beaming participant said, “This is just the beginning.”

See how everything unfolded this week—including new participant Amy‘s own transformation journey with help from L.A. Lakers strength and conditioning coach Gunnar Peterson—in the full recap video above!

Watch a brand new episode of Revenge Body With Khloe Kardashian Sunday at 9 p.m., only on E!