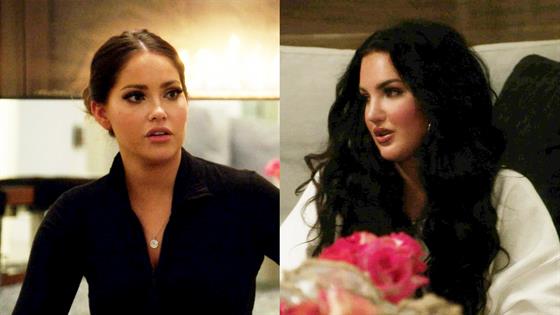 Can Natalie Halcro and Olivia Pierson get on the same page?

In this clip from tonight’s all-new Relatively Nat & Liv, the fashionable cousins find themselves at odds over upcoming deadlines. While the rest of the Halcro-Piersons seem to be having a nice night, Nat is noticeably stressed.

“Everything,” the former WAGS star retorts.

Liv, who is also clearly overwhelmed, highlights that there is still so much to do before their clothing line’s fashion show.

Although Stephanie tries to reassure Nat and Liv that they always “pull everything off,” the famed influencers still seem doubtful. The conversation takes a heated turn when it’s revealed that Nat took a business call without Liv.

Even though Halcro assures her cousin it “obviously wasn’t intentional,” Liv accuses Nat of previously leaving her out of big business decisions. Understandably, this accusation leaves Nat feeling defensive.

“Actually, would like to include you in a lot more things—’cause I actually need a lot of help,” Nat snaps back.

Clearly, Nat doesn’t agree with this point as she claims Liv hasn’t “once” offered to help.

See Nat and Liv’s heated conversation in the clip above!

Watch a brand new episode of Relatively Nat & Liv Tuesday at 8 p.m., only on E!