A devious husband trying to save a few pennies revealed how he’d been tricking his wife for a whole year – by swapping her branded mayonnaise for a cheaper alternative.

The sneaky man shared a picture of himself using a piping bag to refill a squeezy bottle of empty Hellman’s light mayo with a jar of Aldi’s own brand full-fat condiment.

He wrote alongside the post on Reddit: ‘Piping the Aldi mayo into the same Hellman’s bottle we’ve had for a year so the missis will not know she’s a commoner[sic].’

The post racked up hundreds of comments, with some claiming the action was ‘illegal’, while other fumed that he was adding extra calories to her diet without her knowing. 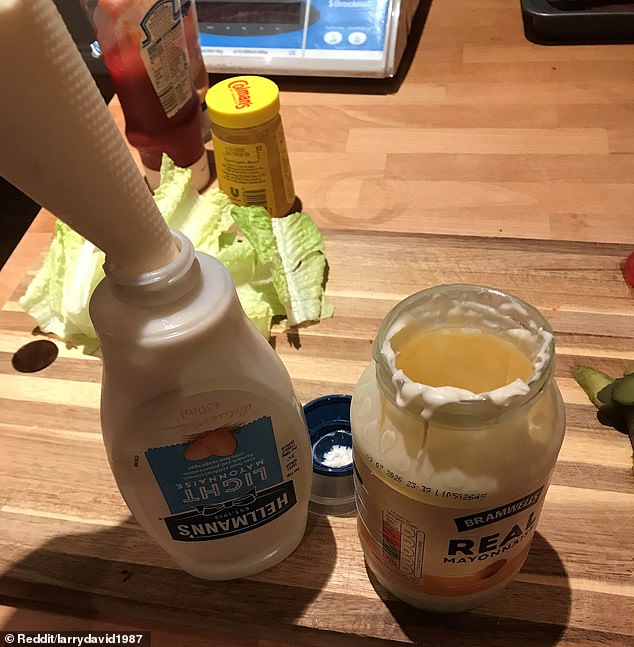 One angry person said: ‘If someone swapped lighter mayo for full-fat mayo I would be livid. All the extra calories I’d consume without knowing it…’

Another agreed: ‘This disgusts me in a way I can’t explain.’

Some were surprised his partner hadn’t noticed after a year: ‘If she doesn’t tell the difference I will be shocked. If it ain’t Hellman’s light I can tell right away.’

It was a worry for some who wondered if the sneaky man had been washing out the bottle inbetween uses: ‘I hope you give it a good wash and you don’t have year old mayo mixed in there.’ 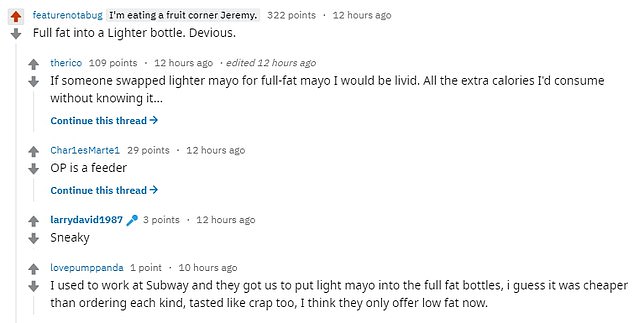 Another asked of the reuse of the year old squeezy bottle: ‘Has she not peeked the expiry date???’

One person joked: ‘Hope there’s a long use by date on the receiving bottle. But generally, well done. Make your missis feel like a princess[sic].’

Others then began sharing their own experiences with condiment swapping as one mum revealed: ‘I did this to my kids. Made the 6 year old a tuna sandwich. “Mum” she goes “are you sure this is Hellman’s, it tastes funny”. I said “no it’s the usual mayo”.

‘I used to work at Subway and they got us to put light mayo into the full fat bottles, I guess it was cheaper than ordering each kind, tasted like c*** too, I think they only offer low fat now,’ shared another.