It also starred the Duke and Duchess of Cambridge.

It had the caption: “As part of last week’s VE Day commemorations, members of the Royal Family spoke to veterans who served in the Second World War about their recollections of that remarkable day.”

The royals were praised for their appearance in the video.

The Countess talked with an older gentleman in the video about his VE experiences.

Judi claimed Sophie seemed like a younger relative of the man in the sweet clip.

The body language expert said: “Sophie’s act of lowering would raise the perceptual status of the person she’s chatting to.”

Judi went on: “Her approach seems to be to show she already has information about the man she’s chatting to, which would feel flattering, and to work by using prompts then using active listening signals like nodding to allow them to take over the conversation.

“She signals warmth constantly via the frequent smiling and laughing and her approach of looking like a visiting younger relative.”

Speaking of both Sophie and Princess Anne in the video, Judi said: “Their complete lack of soap opera drama and the way they tend to just get on with the job of being royal without too much fuss and front page headlines might have made these two women the unsung heroes of ‘The Firm’.

“Following some drastic re-shuffling of the top shelf over the last year though, and with the Queen’s confinement during the pandemic, both Anne and Sophie seem to have taken more prominent positions recently though and these clips do appear to illustrate their very different but equally powerful appeal.”

Sophie Countess of Wessex wore a green pretty polkadot dress in the video.

Sophie’s dress is from a luxury brand, Suzannah. The style is the Stormy Hearts Midi-Length Tea Dress, and cost £859.

The Countess of Wessex has been volunteering during coronavirus.

Fans have been claiming the royal is “under appreciated” and “her work and selflessness overlooked”. 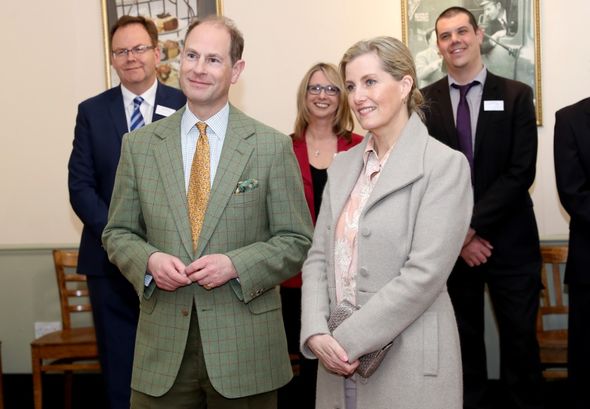 The wife of Prince Edward, the Queen’s youngest son, has been volunteering at a London kitchen. She has been doing so once a week, “privately, without any fanfare,” according to the Daily Mail.

Sophie has also been helping at Rhubard, which is a catering company that is also providing melas to NHS staff.

The organisation has said: “Thank you to Her Royal Highness The Countess of Wessex for joining us today and working so hard in the kitchen at rhubarb to prepare food for our heroic NHS Hospital Teams.”

The charity work has caused fans of the Countess to speak out about her work, which they claim is “under appreciated.”