The Countess and the Earl of Wessex were greeted by crowds of children as they visited a school in Guernsey.

Sophie Wessex, 57 and Prince Edward, 58, started the last day of their visit to the Channel Islands by visiting Forest Primary School this morning.

The couple travelled to the islands on Thursday to mark Liberation Day and took part in Jersey’s Liberation March yesterday,

For the last day of her trip to the island, Sophie donned a stylish green jacket with trendy checked flare trousers. 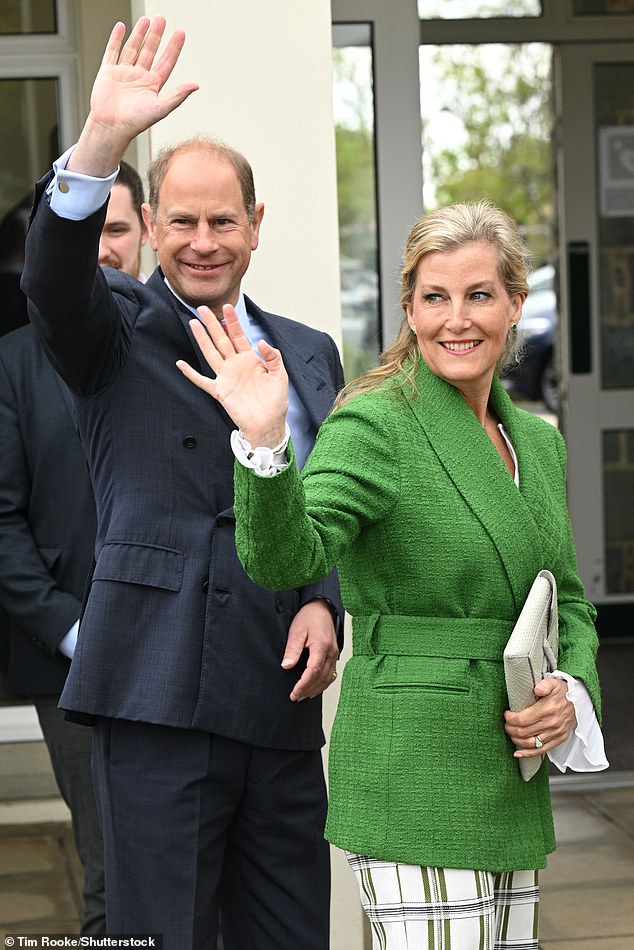 Sophie Wessex, 57 and Prince Edward, 58, started the last day of their visit to the Channel Islands by visiting Forest Primary School in Guernsey this morning

The mother-of-two wrapped up in the tweed jacket cinched at the waist with an oversize built-in belt.

The ruffled sleeves of the white blouse she wore underneath peeked out at her wrist.

She matched both the jacket and the top with a pair of white trousers with a green checked details and white espadrilles.

Stylish Sophie paired the look with a cream clutch bag, a discreet pair of stud emerald earrings and a silver necklace. 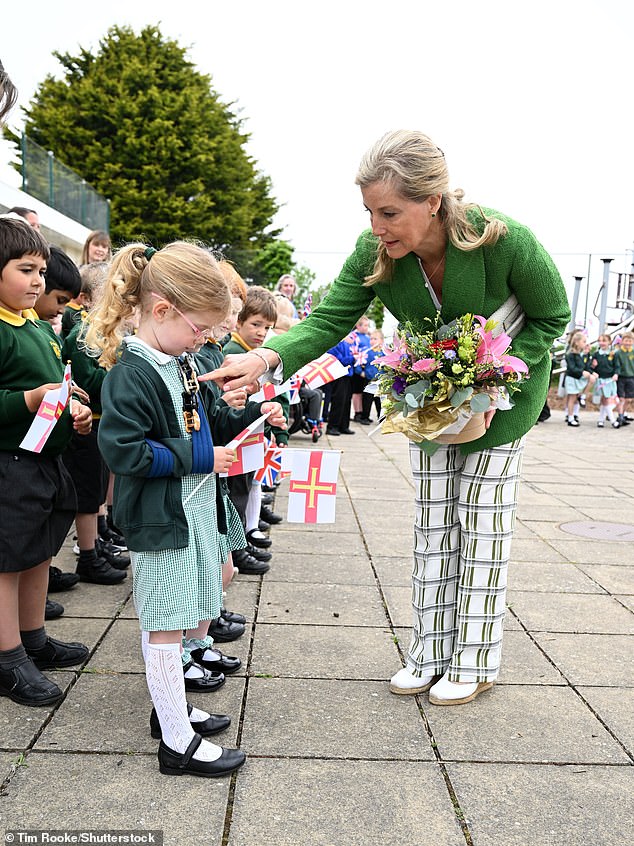 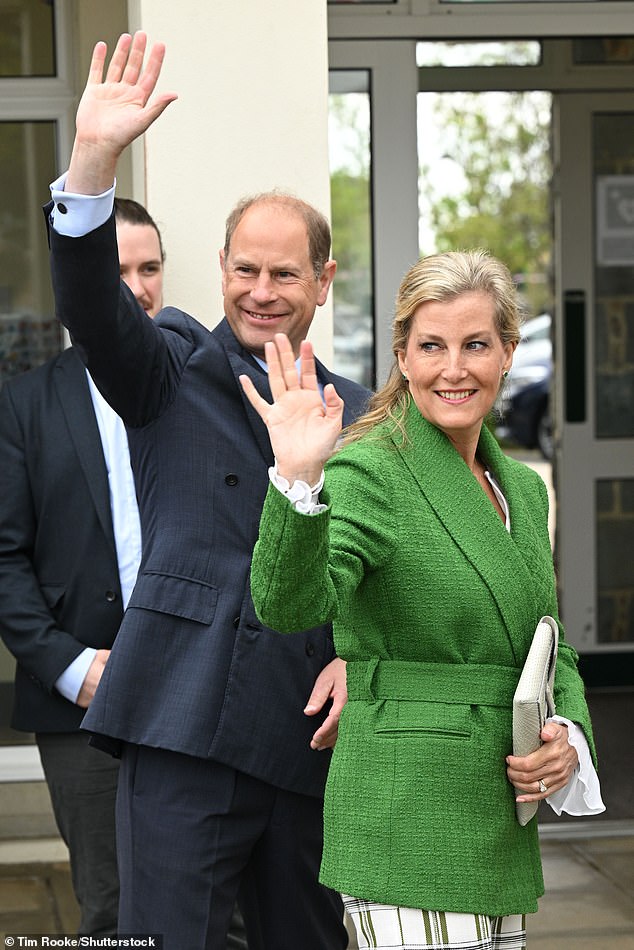 Her blonde locks were styled into a neat blow-dry and tied at the ack of her head with a pin.

The mother-of-two opted for a tasteful makeup, with a dash of blush on the cheek and a splash of mascara to add some peps to her blue gaze.

She completed the look with a discreet rosy lipstick.

Meanwhile, Prince Edward looked dapper in a navy suit, which he paired with a light blue shirt.

The couple were greeted by the school’s star-struck pupils, whose green uniforms happened to match perfectly with Sophie’s look.

Not your average school day! The Countess and Earl of Wessex arrived at the school and were greeted by staff and pupils this morning

A timid schoolgirl handed Sophie a bouquet of fresh blooms, which the Countess kept with her during the introduction.

Both Sophie and Prince Edward took the time to get to the know the schoolchildren, pointing to their uniforms and asking them about their day.

The Earl and Countess of Wessex arrived in the Channel Islands, on Sunday, and yesterday they watched the march to celebrate Guernsey and Jersey’s national day.

They went on to visit to take part in a Liberation Tea Dance at Beau Séjour with the island’s Occupation Generation and special guests. 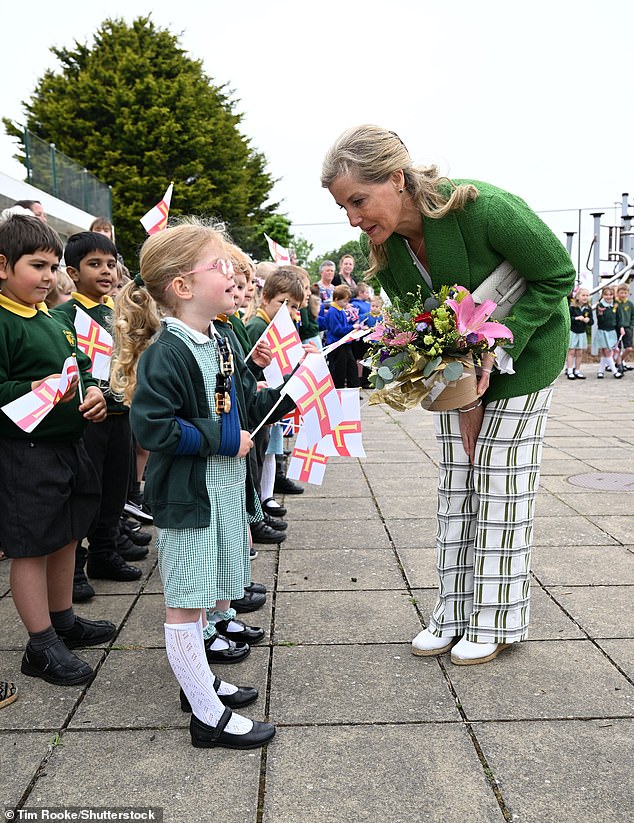 Sophie took the time to speak to the pupils, who greeted her with flowers and the island of Guernsey’s flag 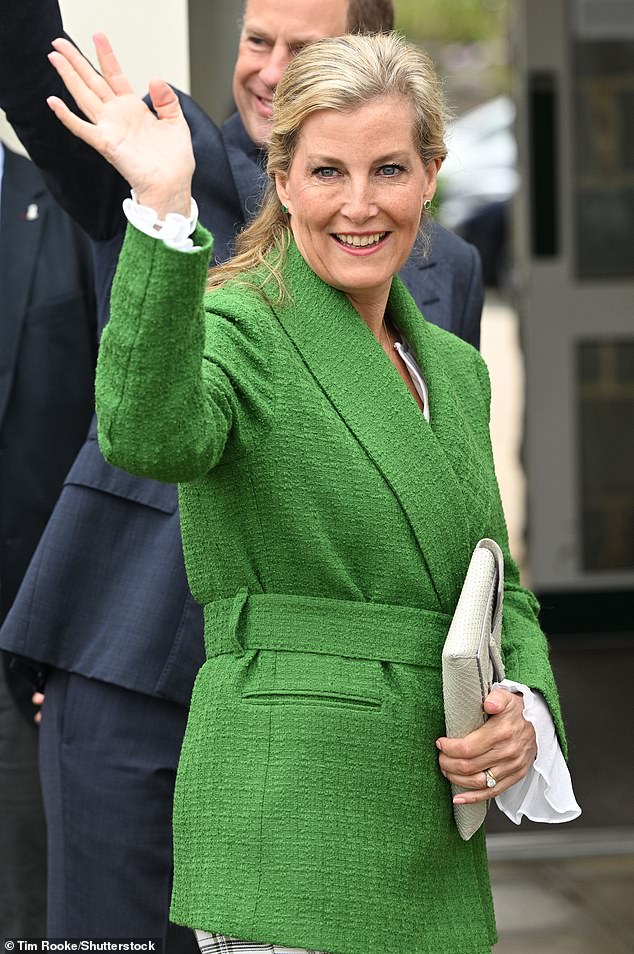 The Countess opted for a stunning emerald green midi dress, sweeping her blonde locks into a neat up-do for the occasion.

During the outing, she could be seen giggling as she chatted with other attendees fo the event.

Earlier in the day, Sophie, donned her favourite Erdem flower dress paired with an ‘Indiana’ Jacket from Altuzarra, while Edward wore a grey suit and a purple shirt as they laughed and smiled while waving to the crowds as they stood on the hotel balcony.

The march today marked the end of the occupation by Nazi Germany during World War II. The Channel Islands were the only United Kingdom territories to be occupied by the German Forces. 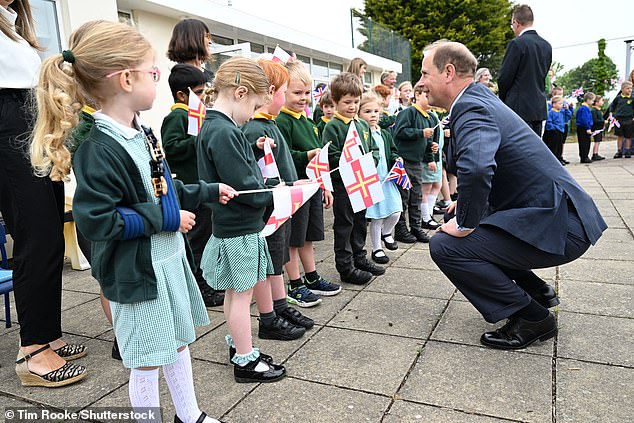 Prince Edward took the time to chat to some of the school’s young pupils, asking about their day 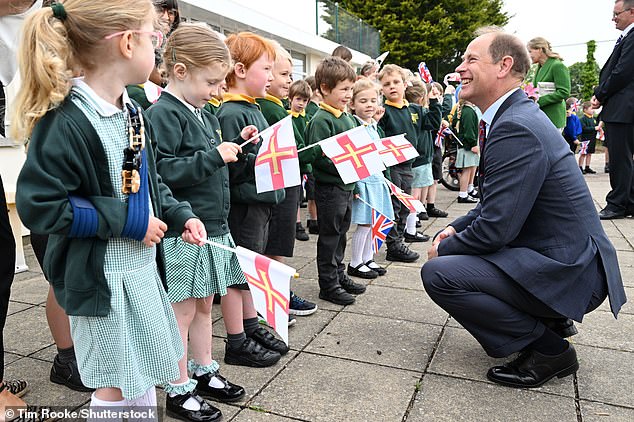