Premier Gladys Berejiklian has rejected charges she is creating a “divided city” by applying different rules and police enforcement in the hotspot areas to the rest of Sydney, arguing it is important to focus resources where they will make a difference.

As NSW reported another record number of COVID-19 cases on Saturday, with 825 local infections and three deaths in the 24 hours to 8pm on Friday, Ms Berejiklian said hard data was informing the government’s focus on south-west and western Sydney. 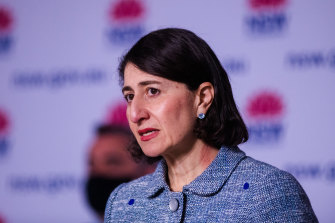 Premier Gladys Berejiklian said the crackdown on western and south-west Sydney was informed by data.Credit:James Brickwood

“When you are in a pandemic, all of your resources are stretched,” she said. “When you have an outbreak where between 70 and 80 per cent of cases a day are coming from the same area, that’s where you need to put your resources to reduce case numbers; otherwise, you’re spreading resources across a very large area.”

Asked whether the different restrictions were dividing the city, Ms Berejiklian said “no” and pointed out younger residents of the city’s west and south-west were being prioritised for vaccines. She also said everyone in the state was in lockdown and had to wear a mask when outside their home, except while exercising.

On Saturday, 19 Labor councillors from Liverpool, Fairfield, Cumberland, Canterbury-Bankstown, Blacktown, Parramatta, Campbelltown, Georges River and Strathfield Councils wrote an open letter to the Premier calling on her to apply the same rules and enforcement across Greater Sydney to “reunite the city” and boost social cohesion.

They said the patchwork of continually changing restrictions made it difficult to disseminate clear public health information in low socio-economic and linguistically diverse communities.

The fact the LGAs of concern faced more restrictions than the rest of Sydney when the virus was spread throughout the city had left residents “feeling ostracised and subject to double standards”.

“It has fermented a dangerous undercurrent of resentment in our community, creating a deep divide between the ‘LGAs of concern’ and the rest of Sydney,” the letter says.

The extra powers announced on Friday – including a 9pm-5am curfew and the power to lock down apartment buildings – came despite Police Commissioner Mick Fuller saying earlier in the week he would not seek additional powers until the end of a 21-day police blitz that started a week ago.

Deputy Chief Health Officer Marianne Gale also said on Thursday that most transmission was still occurring in workplaces and between members of a household, rather than because of people doing the wrong thing.

On Saturday Ms Berejiklian said the decision to increase policing was made to “fight this invisible war with every single weapon we have” and this meant taking “a whole-of-government approach, including police”.

Deputy Police Commissioner Gary Worboys said too many people were still breaking the rules. Police issued 681 penalty infringement notices and more than 50 court attendance notices across the state in 24 hours.

This included an illegal party in Maroubra with as many as 60 people in attendance – including some from the hotspot LGAs – that had resulted in 16 infections so far. Police were also called to events in St George, Sutherland, the Hills District, Tweed Heads and a large funeral in western NSW.

Health Minister Brad Hazzard said these people “don’t give a damn” and were “ransoming” the state’s future.

Ms Berejiklian said the lockdown was “buying time” before the vaccination coverage reached first 70 and then 80 per cent of the eligible population, when national cabinet had agreed Australians would live freely.

The state’s strong vaccination push continued with another 127,000 doses administered on Friday, taking NSW to a total of more than 5.76 million jabs.

Ms Berejiklian repeated her promise of an announcement this week about easing some restrictions for the fully vaccinated and returning students to school once the state reaches the 6 million jab milestone, but provided no further information.

Stay across the most crucial developments related to the pandemic with the Coronavirus Update. Sign up to receive the weekly newsletter.