The ASX-listed wagering, media and lottery company has warned an accelerated switch towards online betting during the pandemic has brought about the need for greater government intervention in the industry. 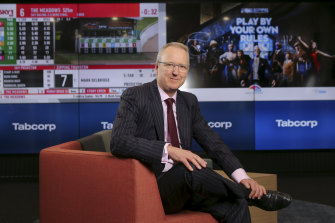 TV gambling commercials remain among the most complained about issues to regulators despite and a crackdown during live sport three years ago, the industry spent $271.3 million on advertising last year, up from $89.7 million in 2011.

“One is that they should look at restricting wagering advertising, particularly around live sporting events, between the hours of 6.30am and 8.30pm, where exposure to children is heightened,” he told a parliamentary committee.

“We’ve seen this done in the UK. It’s a classic way of trying to reduce the impact on the young.”

Advertising for betting products are not permitted during TV programs classified G or lower from 6am to 8.30am and 4pm to 7 pm, or in programs directed at children between 5am and 8.30pm.

Until 2018 those restrictions excluded sport broadcasts however the Turnbull government implemented a ban on gambling ads during broadcasts of live sport between 5am and 8.30pm.

Under the so-called “siren-to-siren ban”, no gambling advertising or promotion of odds is permitted from 5 minutes before the published scheduled start of play, until 5 minutes after play, including during breaks.

However, the crackdown has seen the massive advertising spend redirected to top rating shows during prime-time television, leading to increased viewer complaints and calls from the anti-gambling lobby for a complete ban.

Tabcorp’s TAB business has been losing ground to its online competitors such as Sportsbet and Ladbrokes over the past decade, and the COVID-19 pandemic hit the company hard with a shift towards online betting at the expense of its retail outlets.

Industry analysis shows Tabcorp has been outspent almost four times by its major rivals in the past two years to July. Sportsbet/BetEasy spent $112.8 million on advertising in that time, Ladbrokes/Neds $99.6 million and Pointsbet $28.4 million, compared to TAB’s $64.9 million.

Mr Attenborough said the advertising situation made him “a little bit hot under the collar”, taking aim at the “massive amount of advertising” from the corporate bookmakers.

Responsible Wagering Australia, which represents online bookmakers, has stressed it is committed to socially responsible advertising and meeting community expectations.

It said it was working with governments and industry to explore further opportunities to achieve an “evidence-based nationally consistent framework” for advertising.

The Reverend Tim Costello, chief advocate of Alliance for Gambling Reform who has spearheaded a new campaign to ban gambling advertising, said tobacco advertising was banned a long time ago because it had normalised smoking and made it appealing to children.

“The same principles apply to gambling advertising,” he said. “We would be shocked to see a tobacco ad during football and cricket these days because we know children watch these games and naturally want to emulate their heroes and support their sponsors.”

“We must nip this in the bud right now, and the quickest and easiest way to do so is to end gambling advertising.”