Imagine you were a Korean war baby, adopted by Americans, raised speaking only English, playing baseball, totally Stars and Stripes.

Then, because of a misdemeanour or passport application or some other brush with officialdom, you were told that you were not and never had been American. Your parents never filled in a crucial application for citizenship because nobody told them about it. And you were now being sent back to South Korea.

It’s actually hard to imagine. Justin Chon says he made Blue Bayou, in which he plays a 40-year-old husband and father who suddenly finds himself on the fast track to exile, “in service to the adoptee community”. Since 2000, 50 people have been sent back to the countries where they were born – but there are tens of thousands at the same legal risk, whether they know it or not. There is no system of appeal: deportation is the end of the road. 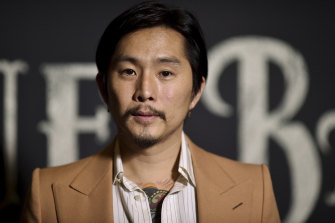 Justin Chon at the LA premiere of Blue Bayou in Los Angeles.Credit:Richard Shotwell/Invision/AP

Chon’s Antonio LeBlanc is a New Orleans tattooist married to Kathy, played affectingly by Alicia Vikander. He is stepfather to Kathy’s daughter Jessie (Sydney Kowalske) and there is a baby on the way. LeBlanc has a patchy past as part of a low-level gang who rustled motorcycles, but he has long since gone legit; money is tight, but they are a visibly happy family.

His list of priors is the clincher. Chon didn’t want his Everyman to be without fault. “I didn’t want it to feel like propaganda,” he says. “It’s just a man’s story, right? And in order to be that, he has to be human, and humans make mistakes. I think that is a big question in the film. Are humans allowed to make mistakes, or do you have to pay for them for the rest of your life?”

Chon wrote the script over two years, layering in story elements such as the location. “New Orleans is unlike anywhere else in America, so there is an irony in that, in that it feels like a foreign country in itself. And very multiracial.”

Asking a Swedish actress to play all-American Kathy was also a deliberate choice.

“I wanted her to make intentional choices about her character,” says Chon. “I felt if I had tried to cast an actress from the South, she would maybe take for granted who she is without analysing it in the way someone who is not American would. And someone who is as talented as Alicia, is going to take a look at a southern working-class American and decide very intentionally what she feels is important for the character.”

Which she did, right down to basing her shoes and hair on women she saw around her.

Chon is a sunny presence on screen. He was born in California to Korean parents who emigrated in the ’70s. He started out as an actor at the beginning of the Millennium, playing a lot of delivery boys and gangsters in Chinese Triads. Later, he was cast as a doctor or the IT guy.

“I think it’s slowly changing,” he says. “I felt like the stories I wanted to see weren’t being made, so decided to step on the other side of the camera.”

He hopes enough people in the right places get to see the film.

“If it’s not being talked about; nothing is going to get done about it,” he says. “That’s why I think, you know, films can be important.”