Australian women face a decade-long “motherhood penalty” on their incomes, earning on average less than half of their pre-birth wage in the first five years after childbirth even if they are the household’s main breadwinner.

A report by Treasury economists Natasha Bradshaw and Elif Bahar released this week at an Economic Society of Australia conference in Tasmania found that women not only suffered a long-term financial penalty from having children, it also affected their satisfaction at work before and after giving birth. 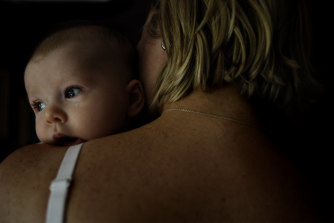 Australian women face on average earning less than half of their partners in the five years after childbirth, and lower job satisfaction.Credit:Louise Kennerley

The economists used tax office data and the long-running Household, Income and Labour Dynamics in Australia survey to track the impact of the birth of a first child on its parents.

They found mothers take a significant financial hit due to reduced working hours and time out of the workforce. The hit is about 55 per cent of a woman’s pre-birth income, with the gap barely changing over the first five years of the baby’s life. The penalty persists for the first decade after childbirth.

Even among those women who continue to work there is a financial price to pay, with their incomes down by 5 per cent.

“The estimates of the ‘motherhood penalty’ imply that children have large effects on the careers of women, relative to men,” the economists found.

“The differences that emerge are driven entirely by women, with men largely unaffected. These effects highlight the strong labour supply implications of entry into parenthood for women.”

In the three years before childbirth, Treasury found men and women’s wages moved in a similar way, but their incomes immediately started to diverge following the birth of a child.

The economists looked at whether parents were making a “rational” financial choice, examining the impact on incomes where men were paid more than their female partner.

But where a woman was the main breadwinner in a parental couple, there was a financial penalty for being a mother.

“A significant and long-run child penalty exists even for mothers who significantly out-earn their partner,” the economists found.

The Workplace Gender Equality Agency found earlier this year that the gap between men’s and women’s wages was 13.8 per cent, a fall of 0.4 percentage points over the past year.

But motherhood does not just hit women’s earnings.

The economists found women’s satisfaction with their job started falling up to a year before they gave birth, suggesting women wound back their workplace expectations before they reach the labour ward.

“The longer-term impacts of children may be unanticipated and that there are significant challenges in re-engaging in the labour market. In contrast, men’s satisfaction with their employment opportunities does not change significantly over time,” they said.

Grattan Institute chief executive officer Danielle Wood said if the country was serious about tackling the motherhood penalty, the costs of caring for children had to be more equitably shared.

She said if more dads took on an active role in care, it would reduce the economic penalty for women, improve life satisfaction for men and aid the development outcomes for children.

“We continue to ask women to pay a huge economic price for having children,” she said.

The federal government’s jobs summit, to be held at the start of September, will include a discussion about gender equality and participation. That is expected to focus on the government’s promise to expand the childcare subsidy to virtually all households in July next year.

Treasurer Jim Chalmers on Tuesday said better access to child care was just as important in dealing with Australia’s jobs and skills issues as increased immigration.

Treasury plans to look at how the “child penalty” plays out across different industries and regions.