Australian television drama is having a moment right now: RFDS has just debuted on Seven; Five Bedrooms has dropped on 10’s new streaming platform Paramount+; and Netflix will soon launch the cyber thriller Clickbait (set in Oakland, California, but proudly made in Melbourne).

The best of this impressive bunch is The Newsreader, which is simply the most fun I’ve had watching telly in a long time. It packs nostalgia, romance and office politics into its six perfectly formed hours, and still finds room to tackle weighty issues such as sexual harassment, homophobia and racism. In its understated way it is quite brilliant. 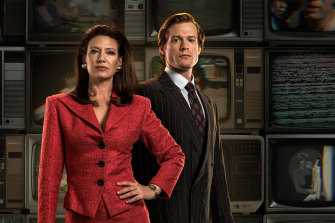 Anna Torv and Sam Reid in The Newsreader.Credit:ABC

The central characters are Dale Jennings (Sam Reid), a newsroom tyro who nervously bumbles his way through on-air reports but dreams of reading the nightly bulletin, and Helen Norville (Anna Torv), who represents everything Dale aspires to. She’s glamorous, poised and delivers the News at Six – alongside 30-year veteran Geoff Walters (Robert Taylor) – as if she both gets it and feels it.

The show is set in 1986, a time when #MeToo is yelled towards newsroom assistant Noelene (Michelle Lim Davidson) as she’s doing the lunch run. Which is not to say it wasn’t going on, merely that it hadn’t been called out.

The dynamic is captured in a brilliant scene in which Lindsay visits Helen at home; nothing explicit happens but the exchange drips sleaze and threat and you sense he’s no first-time caller.

Starstruck as he is, and needy as she is, it’s inevitable Dale and Helen will fall for each other. And it’s easy to see how the heady excitement of covering Lindy Chamberlain’s release from prison, or the Challenger space shuttle disaster, or the Russell Street bombing or Chernobyl might add a certain frisson to this workplace romance. But you don’t need a crystal ball to predict it won’t go without a hitch (or a Hitch, as it were).

Speaking of moments, Stephen Peacocke is having one too. He does great work here as a sports reporter offered a shot at the big leagues, and he’s also in RFDS and Five Bedrooms, and while he’d probably prefer that work to have been spread over the course of a year rather than all landing at once, he’s never deployed his trademark boofy masculinity to such endearing effect. It’s actually pretty refreshing to see a bloke on screen with nothing much to apologise for.

The Newsreader is a terrific ensemble piece – Marg Downey as Geoff’s status-conscious wife and unofficial manager is horribly good (or goodly horrible) – but if there’s a stand-out it is McInnes.

His performance may be all about the braces and the yelling, as he insisted to me recently. But my goodness he’s created a tyrant to remember. And for those who lived through such times, perhaps, one with echoes of real bosses they’ve tried to forget.