Here is a comedy from a young playwright who can reflect the inner-suburban, bourgeois milieu of late Millennials (and early Generation Z) with the same authenticity and ear-to-the-ground frisson as David Williamson taking a mirror to the Boomers. 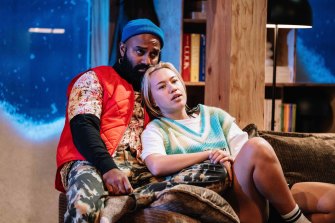 For twentysomething Australians who’ve put their youth on hold through two years of lockdowns, a play as mordant and savvy as Aran Thangaratnam’s Stay Woke will be hugely appealing. 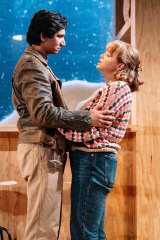 Every generation grows up with a sense of tribalism. It’s an act of social imagination repeated and renewed in perpetuity, and theatre plays an active role in its development.

Thangaratnam playfully captures the lingo and mores of those coming of age in an Australia that’s more multicultural, more digital and globalised than ever. But social inequality is growing, perversely, at the same time as alertness to social injustice (with respect to race gender and sexuality, if not class) is being embedded into social codes of respectable behaviour.

Wokeness comes to enliven – and poison – a skiing weekend at Mt Buller, where two Sri Lankan-Australian brothers Niv (Dushan Philips) and Sai (Kaivu Suvarna), and their respective partners May (Brooke Lee) and Kate (Rose Adams), have hired a chalet to cut loose.

Niv and May are woke to the core. They’re vegan, they’re queer. May is mixed-race and cheerfully nonbinary and monetises her progressiveness at a company called Privilege Guillotine, helping corporates to appear less “problematic”.

Sai is the golden child to Niv’s black sheep: he teases his older brother and as sibling rivalry resurfaces, they turn into man-children and wokeness gets weaponised.

Kate gets caught in the firing line. Anglo, unconfident and only 22, the pharmacy student unwittingly stumbles across woke-hurdles everywhere: misgendering May and triggering Niv’s white privilege alarm.

To compensate, she inspires a wild night that offers a reprieve from social difficulty, in an act of recklessness that almost goes tragically wrong.

The production is slickly designed, backed by the comically absurd spectacle of stage snow in oppressive humidity.

More unusual for the Malthouse is dramatic writing strong enough to allow magnetic and fully inhabited performances – all heightened typologies that fuel the conflict and the humour, while possessing enough nuance to remain characters you can believe in.

There’s no weak link. The ensemble is perfectly poised, though Lee’s charismatic, mischievous and easy-going May comes close to stealing the show.

Sure, Thangaratnam could toy more with form (the one bit of meta-theatre is hilarious). Yet Stay Woke is an impressive main stage debut as it stands – a fittingly up-to-the-minute start to a fresh chapter in Melbourne’s theatre history.

A cultural guide to going out and loving your city. Sign up to our Culture Fix newsletter here.