Rising interest rates are set to push property prices lower even in areas that have so far been immune from the downturn, according to a new report.

Inner suburbs in the nation’s largest cities are in the grips of a property market downturn, but prices in some markets are just hitting their peak, while others still look poised for more growth. 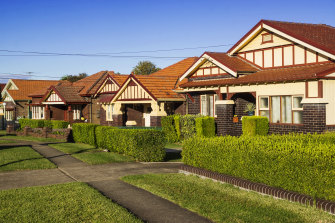 Sydney’s property market is well into a downturn, but other markets are ticking along at a slower rate.Credit:

Sydney is well into its market downturn, and the inner suburbs of Melbourne are not far behind, a new report tracking property cycles across the country shows.

Brisbane and Darwin have more recently shifted into a downswing, Adelaide and Hobart have likely reached the peak, while Perth is closing in on a market high, PRD’s Australian Economic and Property Report 2022, released on Thursday, found.

Most other regional markets were at or past their peak, except for regional Victoria which was not far off, on an assessment of “property clocks” that looks at whether markets are at a peak, trough, upswing or downswing.

“We really are seeing a very fragmented market … it’s really dependent on the supply and demand forces in each of those markets,” she said.

Within cities there were separate markets ticking along at different speeds, Mardiasmo noted. The level of price growth during the boom, the main property type in a market, and the buyers it appealed to were also factors.

“It had always been leading in terms of growth … they’ve galloped towards the finishing line faster, and have now gone past it.

“Each market has a ceiling … Melbourne is very close to that ceiling, inner Melbourne has gone past it, but regional Victoria is still building up to it.”

She added that while areas of Greater Melbourne had recorded price drops, some pockets were still growing.

The stage of the property cycle in each market was determined by assessing annual growth for the year to June, compared to the previous year, and anecdotal evidence from real estate agents about supply and demand in their local market. Housing data from other sources like property analytics company CoreLogic, were also factored in.

But given how quickly the cash rate was rising, more resilient markets were likely to move into a downturn in the months to come as changes to interest rates typically affected slower markets within three to six months.

Starr Partners chief executive Douglas Driscoll said Sydney buyers and sellers were holding back amid speculation of further rate rises and continued price falls, and those pushing ahead were increasingly looking for a bargain. 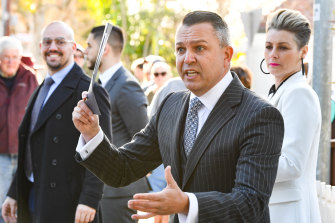 Prices in some markets are just hitting their peak, while others still look poised for more growth.Credit:Peter Rae

“They’ll come to us and try to play hardball on price … and cite various sources that we’re not at the bottom of the market yet, and that the home that they’re looking at will be less in three months’ time,” he said.

“Undeniably the pendulum has swung and it’s now become a “buyers’ market” or that’s certainly the way buyers perceive it, the truth is we’re somewhere in between.”

Driscoll said price declines across his western Sydney markets were approaching 10 per cent on average, but he did not think there was “a huge amount” left for the downturn. Uncertainty was making buyers wary, and once the dust settled on rate hikes, he expected the market would bounce back quite firmly.

For now, necessity sales, driven by deaths, debt, divorce and downsizing, were driving the market, he said. And while competition for homes had dropped off, genuine buyers were still there.

Prices achieved across Ray White’s Melbourne office last month were down about 12 per cent year-on-year, he said, and he had heard of more drastic declines in the inner suburbs. The huge push to regional areas had also eased, slowing price growth.

Dullens said rising interest rates had decreased demand, with most buyers already pricing in future rate hikes. However, he felt the return of a traditionally quieter winter market was also having an effect on prices.

In Tasmania, prices were still strong, but the market frenzy had subsided, he said. Meanwhile, prices in Adelaide were going crazy, with Ray White offices there now seeing the strongest price growth in the country.

Most Viewed in Property