Something strange has happened to Ted Lasso, the sports comedy that swept the field at the Emmy Awards last month.

The show that was so widely embraced for the sunny optimism of its first season took a marked turn towards the dark side in its second, the finale of which dropped on Apple TV+ on Friday. Suddenly, it’s become an examination of masculinity, toxic and otherwise. And it makes it a very different kind of show. 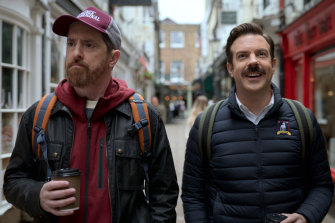 The friendship between Coach Beard (Brendan Hunt) and Ted (Jason Sudeikis) is a key plank of Ted Lasso. Credit:Apple TV+

When I spoke earlier this year with leading man Jason Sudeikis, who plays the hopelessly out-of-his-depth American football coach brought in to manage an English Premier League soccer side in the hope he’ll destroy it (a jilted ex-wife’s plan to have revenge on her former husband, who owned and loved the club before she got it in the divorce), he told me how much he enjoyed Ted’s optimism.

“The ability to not be rattled by someone putting him through something, to see the best in people and in situations, is good,” he said. “Comedically it’s really fun to just be accepting of all things.”

At first, the second season appeared to be serving up more of the same, with the cheerily Zen mood reaching its apotheosis in the oddly timed fourth episode, Carol of the Bells, a Christmas-themed offering served up on August 13. But just like football, this season is a game of two halves, and the dynamic of the back end soon emerged. 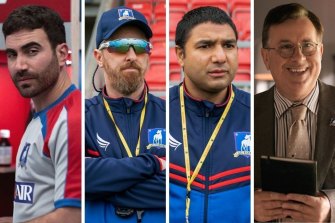 Tired of being overlooked, overshadowed and pushed around, the softly spoken assistant coach Nate (Nick Mohammed) sought the advice of club owner Rebecca (Hannah Waddingham) and glamour model-turned-PR maven Keeley (Juno Temple) about how to be more assertive.

Hooray for Nate, we initially thought, except it transpired they were helping create – or, perhaps, unleash – a monster.

It was great to see Nate stand up for himself in a restaurant where his deference had been used against him, and to demand (politely) the vacant window table so that his parents might celebrate their wedding anniversary in style. But the way he psyched himself up for that request by spitting at the mirror in the bathroom hinted at the Travis Bickle to come.

Sure, the fact he spits at himself (repeatedly) points to the self-loathing that underpins his newly assertive behaviour. But that loathing is then directed outwards at others – everyone from the powerless boot boy Will (Charlie Hiscock) to Ted himself, in an underhanded leak to journalist Trent Crimm of The Independent (James Lance) – and that turns Nate from the unsung hero of the piece to the villain. (As an aside, note how his hair becomes greyer as his psyche becomes darker, as if the goodness of his soul were being leached away.)

Thwarted ambition and a stunted sense of self-worth are at the core of his malaise, but Nate is not alone. The incipient violence of Roy Kent (Brett Goldstein) is mostly played for laughs, but there’s genuine menace in the way his jealousy and possessiveness loom over the tiny Keeley, and threaten her soccer star former boyfriend Jamie Tartt (Phil Dunster).

Jamie has serious issues of his own, principally with his father, a boozing, brawling, brainless embodiment of toxic masculinity who both explains and excuses (to a degree) his son’s failings in the emotional maturity department.

Ted’s offsider Coach Beard (Brendan Hunt) gets a spectacularly bizarre episode to himself, a dark night of the body and soul with distinct echoes of Martin Scorsese’s After Hours. He traipses all over town, chasing the good time that never quite arrives, getting into scrapes, losing his phone and wallet and almost his life, all of it prompted by a twisted co-dependent love-hate relationship with Jane (Phoebe Walsh, one of the show’s writers). The chaos is strong in this one. 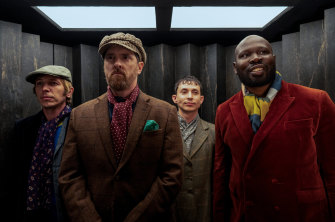 Beard’s dark night of the body and soul makes for bizarre and often hilarious viewing.Credit:Apple TV+

And of course, there’s Ted. From the moment he dashes down the tunnel with 10 minutes left in an FA Cup quarter-final, we know there’s something not quite right – and no one is buying the story that it was just a dodgy prawn sandwich (hello Roy Keane). After much parrying with team psychologist Sharon Fieldstone (Sarah Niles), the truth emerges: Ted had a panic attack. After more probing, there’s a likely cause: his father committed suicide when Ted was 15, and he has had abandonment issues ever since.

The change in tone won’t be to everyone’s liking, and that’s understandable: take one of Ted Lasso was a genuine breath of fresh air, and maybe the perfect pep (not Guardiola) for these lockdown times. But with its insistence on confronting the darkness beneath the surface, Ted take two might be even more timely. Here’s hoping the third and final season will provide some way out of this mess.

Don’t for a moment imagine it’s all bleakness. There are still plenty of moments of levity in season two, even in the darkest episodes. 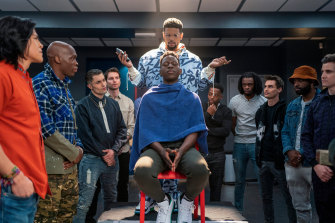 The positive aspects of male bonding are on show in Ted Lasso too, as when Isaac (Kola Bokinni) gives Sam (Toheeb Jimoh) a celebratory haircut in the dressing room.Credit:Apple TV+

And don’t imagine either that this is a relentless hammering away at men. It’s not. It celebrates male friendship, the camaraderie of the locker room, the support and encouragement that men can offer one another when they let their guard down and open their hearts and minds. Above all, it says it’s OK to need, and to ask for, help.

“Believe”, reads Ted’s handwritten sign above the dressing room door. And what season two most wants us to believe is that in vulnerability lies strength.

Ted Lasso is on Apple TV+