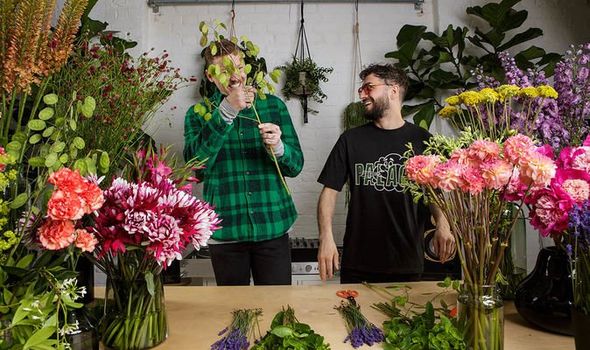 Nearly half of men (48 percent) would feel appreciated if they were given a surprise bunch of flowers while 45 percent would feel loved and 37 percent happy. But while women typically receive a bouquet every few months, men are lucky to get one once a year.

It also emerged just one in six adults have bought flowers for a man, with only a quarter of those with a male partner giving their loved one a bunch of blooms.

Instead, beer (67 percent) and chocolates (27 percent) were among the more typical gifts for men.

A spokesman for FunnyHowFlowersDoThat.co.uk, which commissioned the research to uncover the taboos that still exist around giving men flowers, said: “It’s interesting to see the divide between those who think flowers are feminine and those who have gifted a bouquet to men.

“Flowers have been typically seen as a female gift for decades – whether on St Valentine’s, birthdays or as a pick-me-up, but why shouldn’t men receive them too?

“A bunch of flowers is a powerful way of cheering someone up, celebrating something and generally sharing emotions without necessarily having to say a lot.

“It’s nice to see that the men who have received flowers in the past liked it and we want to help make flowers for men less of a taboo.”

The study also found three in 10 adults would like to see flowers suggested more often as a gift for men, after more than half admitted they have never considered buying a bunch for a male.

But almost a third believe the notion that flowers are ‘feminine’ is an outdated stereotype, while 44 percent feel a bunch of florals is a powerful way to reconnect and communicate without using words.

It also revealed people are most likely to receive a bouquet from their other half (62 percent), followed by friends.

While coupled up Brits are most likely to buy a gift for their other half on birthdays and Christmas.

More than half (51 percent) also treat their partner for Valentine’s and 23 percent do so if they accomplish something.

But a quarter admitted they are fussy when it comes to receiving presents, with 45 percent “overwhelmed” by the selection when buying flowers.

A confident one in three of those polled via OnePoll know their partner’s favourite flower though, with the most popular colours for both men and women as oranges and reds (32 percent) and pinks and purples (27 percent).

Professor Green has teamed up with FunnyHowFlowersDoThat to front the You B’OKquet Mate? campaign.

He said: “In today’s society, it’s fairly rare for men to send flowers, especially to each other, just to say “hey, I hope you’re alright” or to cheer someone up – flowers bring joy both to the person gifting them and the person receiving them.

“I’m so pleased to be supporting this campaign where hopefully we can help remove any stigma for either sending or accepting flowers as men.

“I think men enjoy flowers just as much as women or would do, given the chance.”