For Prue, the mother of 13-month-old Gabe, the sperm donor who helped her to conceive the baby she always knew she wanted is "the most incredible person".

The Melbourne researcher, 38, says there are "no words to describe the gift" from someone who donates eggs or sperm to help another. 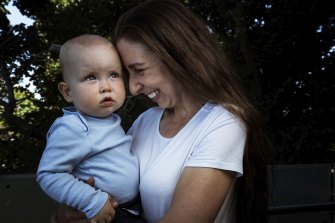 Having witnessed the huge impact donation of eggs or sperm can have, Prue, who has eggs frozen, said she would join a new scheme to encourage more egg donation “in a heartbeat”. Credit:Darrian Traynor

As she approached an age where women's fertility begins to decline, Prue started treatment to collect and freeze her eggs. It is a choice being made by an increasing number of women keen to preserve their fertility as the age of first-time motherhood in Australia rises.

"I always wanted kids and a family, but it just didn't work out for me. I got to an age where I thought, 'I've just got to do this now'," says Prue, who prefers her surname is not published.

She still has eggs in storage and, having realised the immense impact of donating eggs or sperm, says she would join "in a heartbeat" a proposed scheme to allow reimbursement of medical costs to women who freeze their eggs and later decide to donate them.

A solution to Australia's shortage of egg donors, which researchers say is causing thousands to travel overseas to the "shadow market" of commercial egg procurement, was proposed this week by leading Melbourne fertility researchers.

We desperately need to be able to help our patients achieve their dream of having their own families.

It would involve allowing repayment of treatment and egg-freezing costs to women who stored their own eggs for so-called "social" reasons and who later choose to donate them to other women.

While no financial inducement is allowed to attract egg or sperm donations under Commonwealth law, Melbourne University's Alex Polyakov and Genia Rozen say laws allowing reimbursement to altruistic donors who undergo treatment to make eggs for someone they know, technically permit the same for other women.

Allowing clinics to link women who have frozen eggs but no longer need them and recipients who would reimburse their costs would help many women who would otherwise remain childless, they argue in a paper published in BMJ Ethics last week.

Their paper, Social egg freezing and donation: waste not, want not, says data about how many Australians travel to buy donor eggs is not available but "anecdotal reports suggest it may be tens of thousands every year". 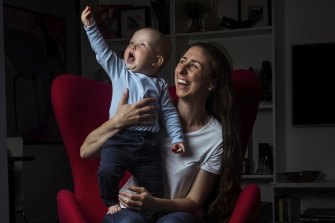 Prue had Gabe, 13 months, after the donation of sperm by “an incredible person” she hopes she will one day be able to thank.Credit:Damian Traynor

"The number of people who freeze their eggs in Australia almost doubles every year," says Dr Polyakov, also a fertility specialist at Melbourne IVF. "In Victoria, very few of them so far have come back to use them and we feel very few of them eventually will.

"There is this huge bank of eggs that at the end of the day, if not used by owners, will be discarded, which provides benefit to no one and makes the whole process of social egg freezing open to criticism," he says. Criticism may arise because the process is expensive, uses resources and many people who do it do not use the eggs so it causes wastage.

"A lot of people freeze eggs but only a minority get any benefits, the rest are just wasting money," Dr Polyakov says.

He and Dr Rozen propose expenses of about $6500 for initial treatment and egg collection and about $500 a year for egg storage be reimbursable to donors by recipients of eggs that would otherwise be discarded.

“Neither the donors, nor recipients are protected from exploitation and fraud. Moreover, in the past year, due to the COVID-19 pandemic, this avenue of obtaining donor eggs has been severely restricted,” she says.

The paper noted that a trend towards delayed child bearing was contributing to "involuntary childlessness" in Australia and "some but not all of these women and couples may be able to have a child if donor oocytes [eggs] were more widely available and significant barriers to access were removed".

While "only 6 per cent–8 per cent of Australian women aspire to childlessness", the paper says, approximately 25 per cent of women end their fertile years without children".

It highlighted an "exponential demand" for donor eggs but says in Victoria, for example, only 235 women were treated with donor eggs in 2019, a decrease compared with 292 in 2009.

Only 6 per cent – 8 per cent of Australian women aspire to childlessness, approximately 25 per cent of women end their fertile years without children.

"We desperately need to be able to help our patients achieve their dream of having their own families. And we wish to do this within our Australian health system with it’s robust and carefully regulated altruistic donor programs," she says.

Some women who banked their eggs "but fortunately do not need to use them" would welcome the opportunity to be able to donate those eggs to other women, "and with appropriate counselling for both parties I see this as a win-win situation".

With "appropriate ethical and legal exploration" it would be possible to develop a reimbursement strategy for women who have decided to donate their eggs, she says.

Louise Johnson, CEO of the Victorian Assisted Reproductive Treatment Authority, says counselling and support with decision-making is legally required and clinics would need to obtain legal advice with regards to reimbursement of retrospective medical costs to donors "as only reasonable expenses can be compensated".

Dr Polyakov and Dr Rozen write that clinical practice guidelines need to be formulated and further research is needed into the attitudes of egg bankers and potential recipients to the proposed scheme and into drafting ethical guidelines.

Melbourne mother Prue, who used a sperm donor as she did not have a partner, says the scheme may help others experience what she has, the joy of being helped to become a parent.

"I can totally understand what an immense gift it is to be able to help somebody who is wanting to have children but unable to do that," she says. "You can't describe the impact that it has for someone. If I could pass that on then, wow, what an incredible thing to do."

Our Morning Edition newsletter is a curated guide to the most important and interesting stories, analysis and insights. Sign up here.