The Block is a bona fide televisual juggernaut. Why? It's hard to say. Reality shows succeed for a variety of reasons, ranging from inspiration to reassurance to schadenfreude, and The Block tends to mix in a little bit of everything. There was a time when people would've scoffed at the idea of a TV show about amateur renovators racing against the clock to do up a house, but that was a more naïve time: these days we know people can't get enough of it. The show's been running for donkey's years and it still beats up mercilessly on its competitors. Every year a new group of wide-eyed hopefuls step into the Thunderdome to see whether they can hack it in the high-pressure world of knocking down walls and selecting tasteful cushions. There's no doubt many people have been inspired to embark on their own renovation adventures by this show. There's equally no doubt that many people have found simple joy in the fact that the participants are suffering in public – it's always fun to see people having a worse time than you are. As this series rapidly approaches the dramatic denouement of finding out just how much these poor sods' blood, sweat and tears are worth, there will be plenty of stirring music accompanying triumphant moments, but also plenty of disaster to revel in. 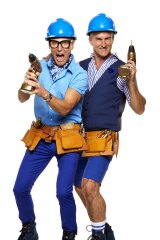 If there's a more watchable TV star than Nathan Fillion I demand to know who it is. He's one of those actors who makes you cry because you'll never be his best friend, and you just know that if you were best friends you'd have the greatest time together. Once Fillion's name was associated with disappointment, as the star of the prematurely terminated classic Firefly. A hit show in Castle later, and he's now the hot property he fully deserves to be. The Rookie is no TV revolution – the tale of Fillion's mature-age police recruit relies on the well-worn tropes and character types you'd expect – but it's a fun and undemanding watch, and in Fillion's company it's impossible to have a bad time.