When Sancho, Rashford and Saka missed their penalties in the Euros final – I felt sick.

Not because it meant football wasn’t coming home, but because I knew what was about to happen.

For many people of colour in the UK, it wasn’t a surprise that these three Black England players were immediately subjected to a torrent of racial abuse on social media – hideous slurs, monkey emojis, violent and terrifying threats.

In just 24 hours, Twitter says it removed more than 1,000 tweets and permanently suspended a number of accounts. The Football Association released a statement condemning the abuse.

The shift in mood from idolising these players as they carried us to our first major final in over half a century, to instantly vilifying and abusing them the moment we lost, proved to many that support and acceptance of Black lives in England is conditional and dependent on our exceptional success, or our quiet assimilation.

But, being prepared and morbidly resigned to the fact that racism was likely to occur after the loss, didn’t make it any easier to witness.

As I scrolled through social media on Sunday night and Monday morning, I felt my heart-rate elevate. Any image of those three players, any mention of the football, I felt jittery and tried to scroll past quickly.

I realised that a big part of the problem was that people were endlessly sharing screenshots and retweets of the racial abuse that was being reported and removed from the sites.

The intention cited was often to ‘raise awareness’ of the problem, or to ‘call out’ those posting these vile messages. But for people with lived experience of racism, seeing racist abuse reposted repeatedly on to the timeline feels like being retraumatised, over and over.

Sofia Akel, race equity researcher and founder of Free Books Campaign, believes that reposting racist abuse inevitably amplifies the comments, which is actually the aim of the perpetrator.

‘Racism in this country is incredibly well documented, so I ask – for whom are we raising awareness? And why must this come at a further cost to Black people, in terms of the trauma and pain that we are continuously subjected to?’ Sofia says.

‘Many people who reposted racist screenshots of the footballers’ social media with the intention of “raising awareness,” then went on to tag the players, subjecting them once more to malicious hatred.’

Sofia says it’s vital we find a more sensitive way to eradicate racism online, one that centres the victims of racism and limits their exposure to further hate.

‘If, for example, Instagram removes racist messages from the timeline, but they’ve been screenshotted, shared, and have gone viral on Twitter, the harm that the original comment may have caused, has now multiplied,’ Sofia explains.

‘I have a strong visceral reaction to seeing those images. They are not abstract or arbitrary, they are loaded with hatred and a pain that we have felt for generations. I am immediately reminded of all the times that I endured racist abuse and was made to feel ashamed of my heritage, of my being. It impacts us mentally and physically as we take on the pain of our brothers.’

However, is there an argument that sharing these abusive messages could have some positive impact? Could it be that some sections of society are unaware of the scale of the abuse, and increased visibility could spur people into action?

‘Some people, as irritating as it is, won’t believe it until they see it,’ says Kim McIntosh, author of black girl, no magic.

‘Or they won’t fathom the extent or intensity of it until they are shown it explicitly.

‘Nonetheless, we don’t know what people are going through or have experienced. We don’t know where they’re at. I wouldn’t recommend sharing screenshots without pausing to consider: What is this for? What do I want to achieve with this?

‘If you think you can change some minds by posting it, then at least caveat it with a trigger warning or content notice so people can engage on their own terms. But you can share outrage without forcing us to read abusive messages.’

Kim says the racist fallout from the Euros has been difficult to watch – it even made her cry at points.

‘I personally, do not need to see these messages posted on social media,’ she tells us.

‘I knew it was coming and I don’t see what I gain from reading it. The moment in itself is draining enough without reading the abuse verbatim.’ 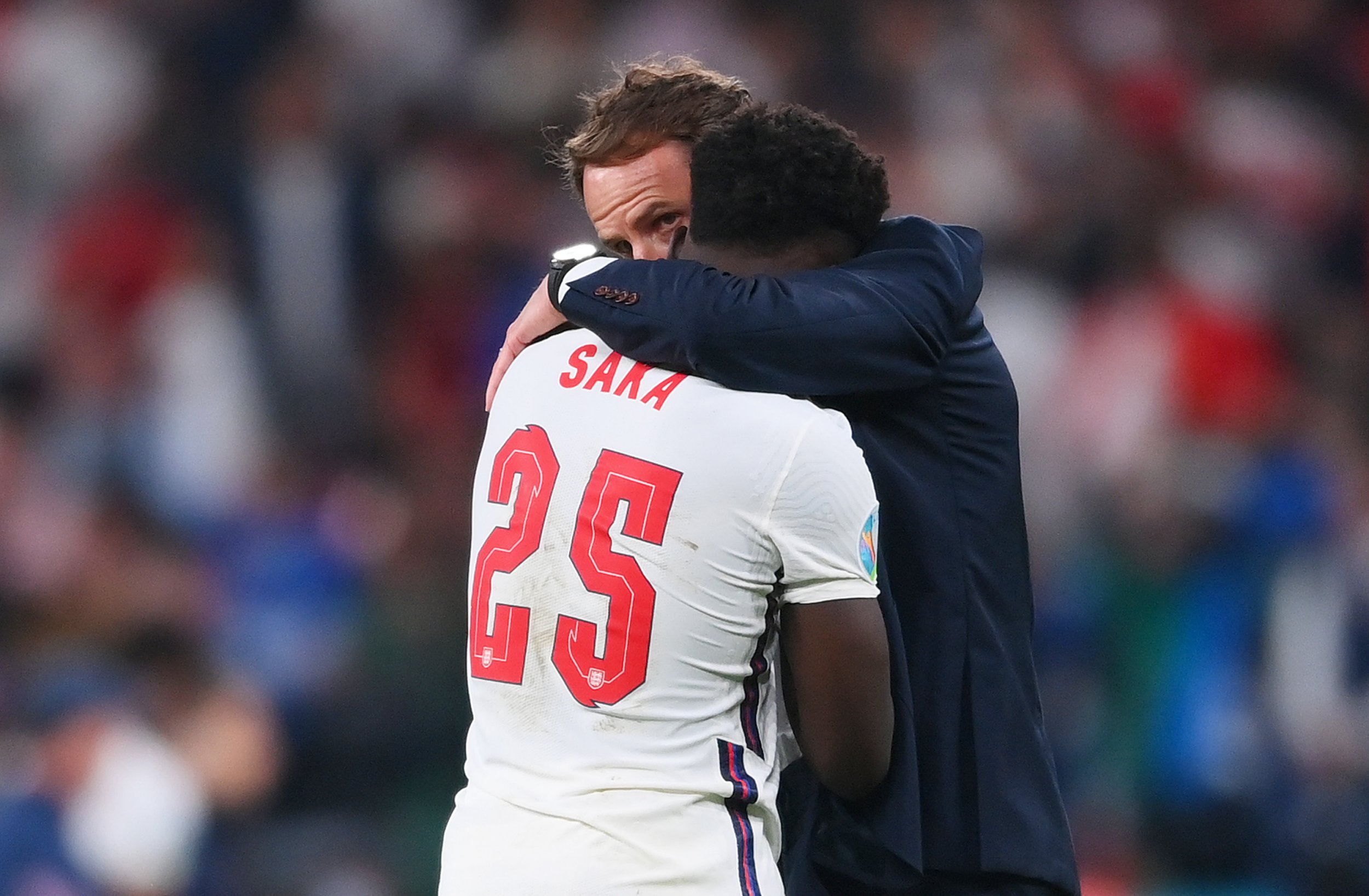 Over the last year, more people have been thinking more seriously about anti-racism and allyship. Psychologist Dr Roberta Babb believes this is a good thing, but that prospective allies need to think carefully about how they are engaging with anti-racist behaviours.

‘With anti-racism, it is important to resist the re-enactment of racist dynamics associated,’ Dr Babb tells Metro.co.uk.

She says that when we share screenshots of racist messages and focus on ‘calling people out’ and shaming the people who have posted them, we individualising racism and potentially losing site of the bigger, more systemic problems.

‘It would be easy to dismiss the abuse of Saka, Sancho and Rashford as an isolated (although repeated) incident which focused on a few people,’ says Dr Babb. ‘This is unhelpful as it is easy to problematise individuals, as they are smaller targets, than to focus on the lager more powerful factors.

‘This process also serves the function of absolving institutions, systems and structures of responsibility, accountability and ultimately the need to change.

‘Racist behaviours do not occur in isolation or a vacuum. It is important that the structures, systems, institutions, and people that create environments where high levels of racism are expressed and normalised are examined, interrogated and modified.’

Dr Babb says racial equality can only happen when institutions identify and acknowledge fallibilities take responsibility for their role in creating and maintaining inequalities.

‘It also needs to use its power, privilege and position for change,’ she adds. ‘This is a big task, and it is important to engage with it in a way that does not unduly distress, traumatise, retraumatise or burnout racially marginalised individuals.

‘There are things that racially marginalised people and other who have been affected by the recent events can do to support and look after themselves and it focuses on understanding and accepting what you can and cannot control.’

Reacting to racist abuse and speaking out against it is vital and necessary in the fight for equality.

It is possible to do this in a way that doesn’t cause any further trauma.

‘Last summer, following the murder of George Floyd and the Black Lives Matter protests, social media was inundated with infographics and “what to do next” guides – it is time to apply that learning.

‘Racism in football does not exist in a vacuum, it is part of our society, our workplaces and our institutions. Therefore, making social media safer is only one part of tackling the deep-rooted, malevolent racism that exists in this country. Your “actions” cannot start and end on the timeline.’

For those of us affected by seeing racism online – either the initial abuse, or reposted comments – Dr Babb has compiled a list of coping mechanisms that can help:

Emotions are important as they tell us something about an experience. The emotions felt in response to the game will comprise a wide variety and they are all normal responses to an abnormal situation.

Recognising and understanding your emotional response to race-based stressed will also help you determine whether you become hyper-aroused or hypo-aroused to stress.

Look to what you can control and create and enforce boundaries

Emotional distress is not something that quickly goes away. Give yourself time and space to feel, reflect, and process what you are feeling.

This may involve you creating space for yourself and being more self-focused by being more intentional with your time and availability.

Practicing mindfulness can help calm you as you are in the moment, and it increases your awareness without judgement about what is going on in your mind and body.

Mindfulness and meditation can also help you release tension that you may be holding in your body which will also help you relax. Mindful breathing can be helpful in calming your mind and body.

Be compassionate and kind to yourself. Recognising what you are grateful for is a powerful antidote to stress and it helps to balance the impact of the negative experiences that you may be having.

Surround yourself and connect with people who nurture and support you.

This maybe with people within your cultural or racial community or allies that you trust.

Talking to someone about how you feel in response to the recent events is important. This can be a partner, family member, friend or colleague.

However, given the personal connection to the issue, some people may find it more helpful to talk to someone they do not know, i.e. a charity or a professional psychologist or therapist.

Psychological services can be accessed via: