WILKO’S pick and mix deal is back for Christmas with half price on all cup sizes.

If you've got a sweet tooth, the deal means you can fill up a regular cup for £1, instead of the usual price of £2. 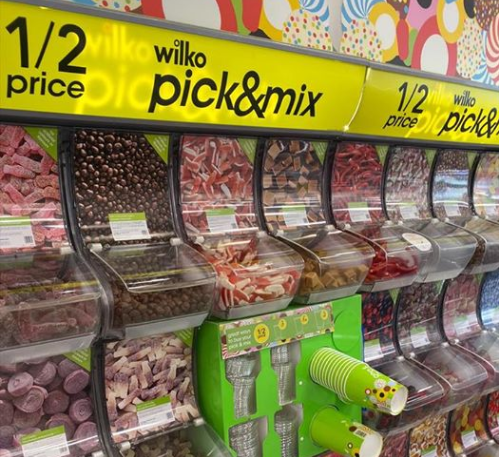 Under the offer, medium cups now cost £1.50 rather than £3, while large cups of sweets are down to £2, instead of the usual £4 charge.

The deal, spotted by Money Saver Online, is available now until December 24 in all Wilko stores that sell pick and mix.

Wilko has 405 stores in the UK and you can find your nearest branch by using its online shop finder tool.

All pick and mix sweets are included in the deal, including jelly snakes, cola bottles and chocolate jazzies.

To get the discount, fill your cup up as normal with as many sweets as you can and the half price offer will automatically be applied when you pay.

But if you're conscious about calories, you might want to read how we ranked pick and mix sweets in terms of calories.

Yellow belly snakes proved to be the most calorific, packing 210 calories each.

The best are sweet bananas which contain 30 calories each.

Wilko often reduces the price of its pick and mix for a limited time, having last brought the discount back at the end of November.

In more Wilko news, the retailer recently slashed Christmas tree prices by up to 33 per cent.

And back in the summer, Wilko was selling packs of 12 condoms for a bargain 10p.