Woman, 32, who couldn’t carry a child after suffering from cervical cancer welcomes a baby boy after her best friend agreed to be her surrogate

A woman who couldn’t carry a child after battling cervical cancer has become a mother – after her friend was her surrogate.

Cassie Bush, 32, from Somerset,  first noticed bleeding after sex in 2016 and was diagnosed with stage 2B cervical cancer- this is when the cancer has started to spread outside of the womb.

In November 2017 she chose to freeze her eggs on the NHS and after months of gruelling chemo and radiotherapy at Royal Unit Hospital, Bath, Cassie got the all-clear in March 2018.

She quickly began searching for a surrogate to carry a baby for her and her boyfriend- before her best friend Becky Siddell, 31, offered to help.

Becky had a fertilised embryo transferred into her uterus and she went on to welcome Cassie’s son Barnaby in May 2022.

Cassie said she ‘never expected’ to have a baby in ‘this way’, adding: ‘We couldn’t believe it when Becky offered to carry our baby for us. We thought it was just something said over a few drinks and not a genuine offer.’ 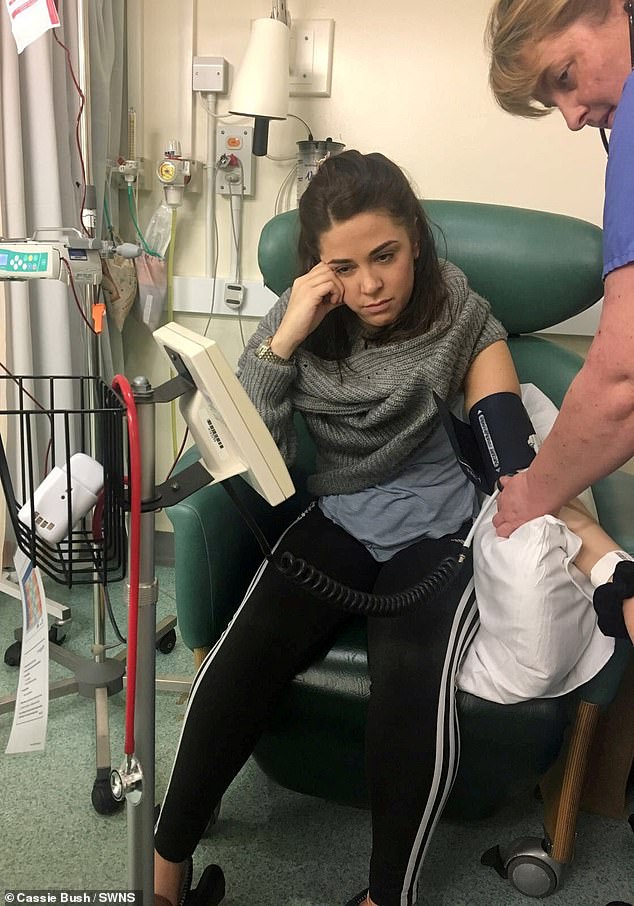 Cassie Bush, 32, from Somerset,  who couldn’t carry a child after battling cervical cancer has become a mother – after her friend was her surrogate (pictured, having chemotherapy) 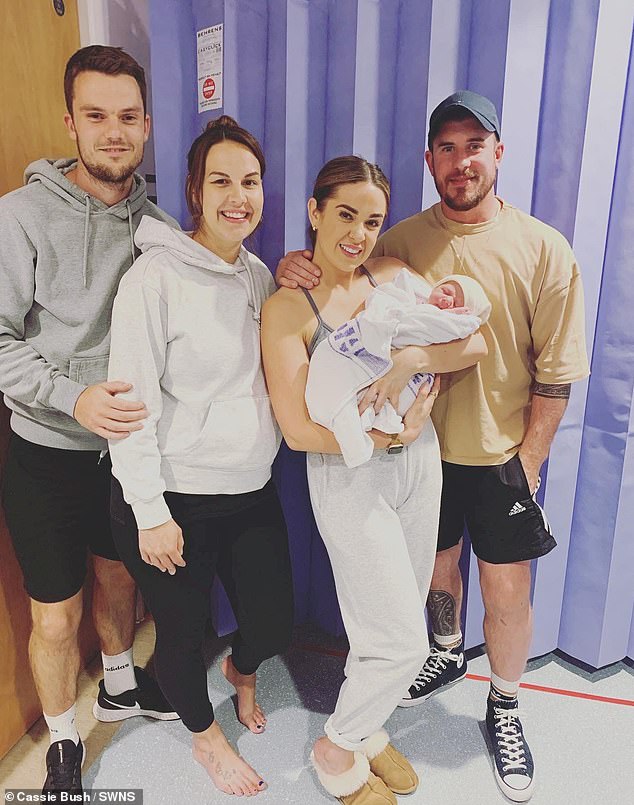 Cassie was initially diagnosed with cervical ectropion – a condition where the cells from inside the cervix grow outside.

Cassie, who was ‘in no pain at all’, didn’t think much of the condition when she was diagnosed with cervical ectropion.

But as the bleeding worsened, Cassie’s boyfriend Jack Clail, 31, insisted she go back to the doctor.

After seeking a second opinion, was sent for an internal ultrasound and a biopsy on her cervix at Royal Unit Hospital, Bath, to find the cause of the bleeding. 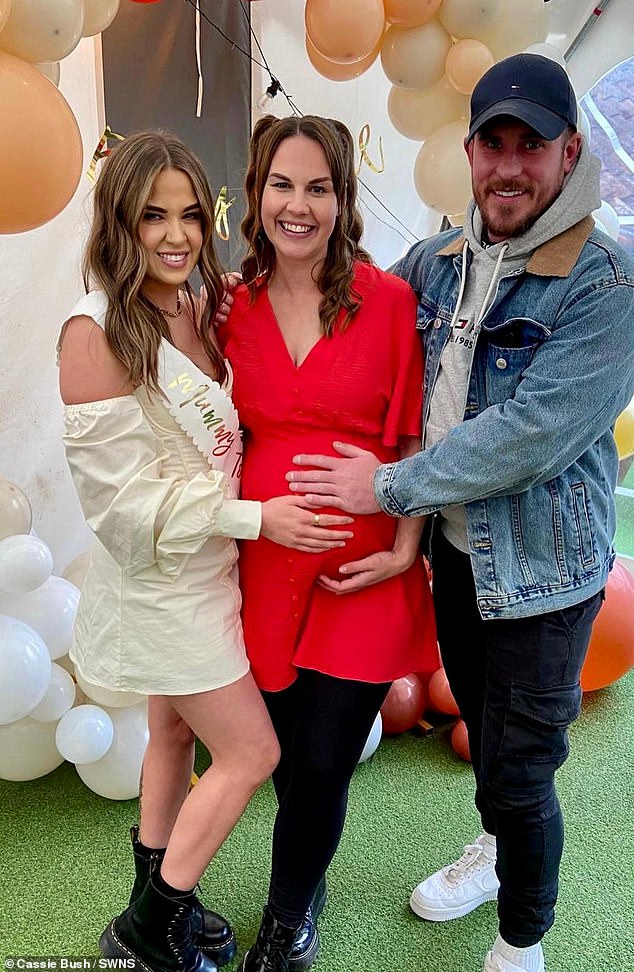 Becky had a fertilised embryo transferred into her uterus and she went on to welcome Cassie’s son Barnaby in May 2022 (pictured, Cassie with Becky and Jack)

Cassie was shocked to discover she had Stage 2B cervical cancer around a year later on October 4 2017.

An MRI scan revealed the cancer had spread to her lymph nodes and she needed chemotherapy and radiotherapy.

Cassie, a beautician who owns her own company, from Keynsham, Somerset, said: ‘Two weeks before my diagnosis, my life was normal. Then suddenly I was focusing on cancer and thinking about my future.’

‘Jack was amazing at firing all the questions – I just sat there in complete disbelief.’

Cassie was dealt another blow when she found out the radiotherapy would trigger early menopause and make it impossible for her to carry her own baby.

Her only option for having her own baby in the future was to freeze her eggs and use a surrogate carrier.

She had 26 eggs collected – 20 of which were combined with Jack’s sperm to make an embryo.

WHAT ARE THE LAWS ON SURROGACY?

The laws of surogacy differ from country to country.

In the US the laws suffer from state to state; some states have written legislation while others have common laws stemming from court decisions.

For example, California is accepting of surrogacy agreements and upholds agreements that include LGBT people.

However, others are stricter, like Michigan, which forbids absolutely all surrogacy agreements, and fines people $500,000 for entering into agreements.

In the UK surrogates are the legal mother of any child they carry, unless they sign a parental order transferring their rights to the intended parents when they give birth.

The birth mother always has the right to keep her child, even if they are not genetically related.

It’s illegal to pay a surrogate in the UK, except for medical expenses.

It was followed by four session of brachytherapy – internal radiotherapy – over two weeks in January 2018, to zap any remaining cancer cells.

‘Only two of my eggs were very high grade so not the best odds,’ she said.

‘But I focused on the treatment, which was tough, but I didn’t let it get me down.

‘I always did my makeup and tried to feel my best, I went to out celebrate New Year’s Eve and made sure I still did normal things.

‘My family were amazing – my dad, Kelvin, took me out for lots of fry-ups to help me gain weight after I lost a lot during chemotherapy.

‘It was a difficult time, but I had lots of support around me.’

In March 2018, Cassie went for a final MRI scan which showed no more signs of the disease.

Despite being cancer-free, Cassie’s body entered menopause and she had to start hormone replacement therapy.

‘It finally all hit me, and my body was going through a lot of changes,’ she said.

‘But when I started HRT, it was like a cloud had lifted and I felt like myself again.’

After settling back into normal life, Cassie and Jack joined Surrogacy UK and started looking for a potentially carrier.

Despite going to a few events, the couple struggled to find anyone they bonded with and left feeling deflated.

While out for drinks in 2019 with their best friends Becky, a family support worker, and her husband Jamie, 31, a lorry driver, they got chatting about their search.

That’s when Becky proposed an idea that ‘blew’ the couple away.

Cassie said: ‘Jack went to school with Jamie, so we were all really good friends.

‘Out of the blue, Becky said she would be our surrogate – I couldn’t believe it. 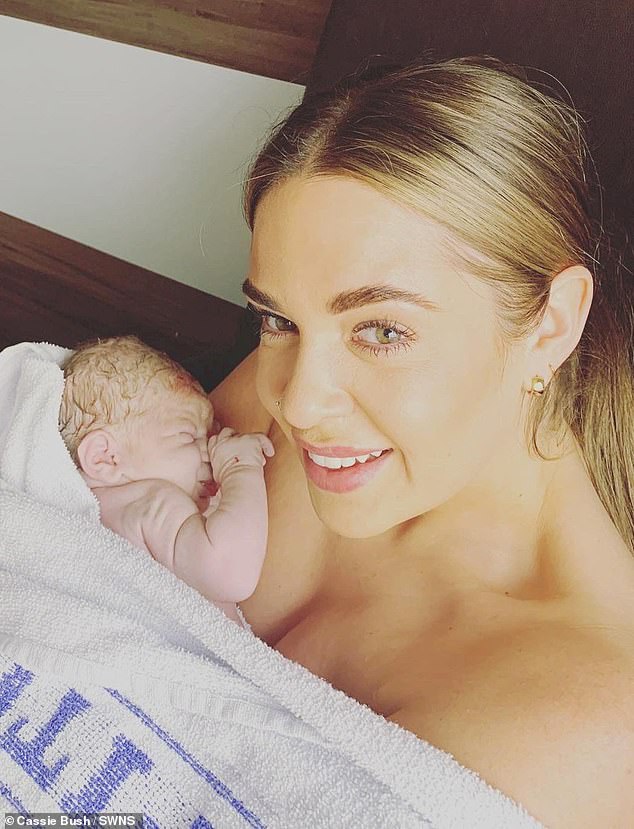 Becky gave birth to Barnaby, at the Royal Unit Hospital, Bath, in May 2022- weighing 6lb 15.5oz (pictured, Cassie with her son)

‘We text her the next morning asking: ‘are you sure?’

‘But she was deadly serious the next day, and we were so overwhelmed.’

Becky, who already has two children, Max, nine, and Evie, five, was able to sign-up to surrogacy UK because she has already carried children of her own.

After all the legal documentation was signed, Becky had a fertilised embryo – made up of Cassie’s egg and Jack’s sperm – transferred into her uterus in September 2021- at Bath Fertility Clinic, Bath.

A few weeks later, on September 15 2021, she invited Cassie over to take a pregnancy test and they were delighted to discover she had fallen pregnant on the first try. 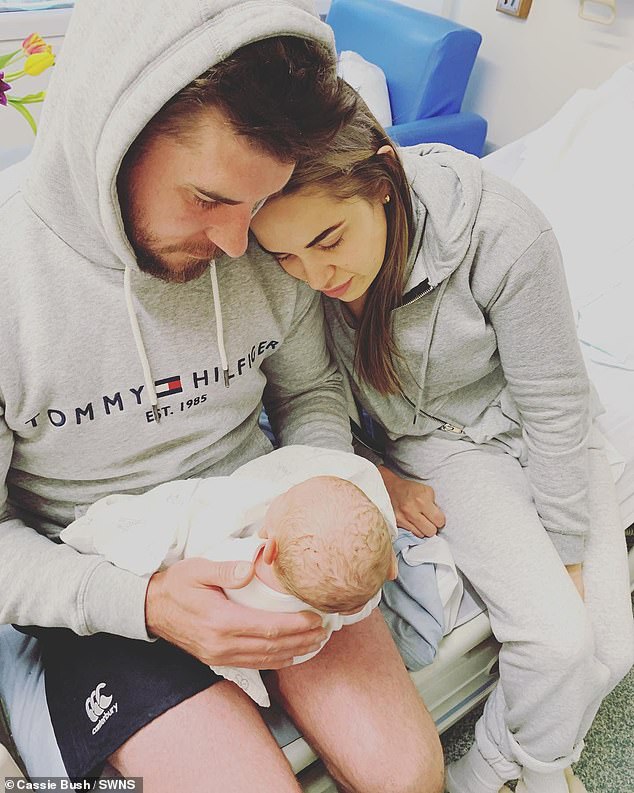 The expectant mother then surprised Jack with the news that they were going to be parents.

Cassie said: ‘I swore everyone to secrecy so I could tell him myself.

‘I always dreamed giving him a box with a baby grow and positive pregnancy test inside.

‘I pretended they were paint samples when he opened it – he was so happy.

‘Becky was a dream throughout the pregnancy, we managed to come along to all the appointments.

‘She really made us feel part of the whole journey.’

The group are now closer than ever, with Cassie saying Becky has been ‘so relaxed and reassuring’ during the process

At 38 weeks, doctors found Becky’s blood pressure was high, so doctors induced her the week of her due date, at the Royal Unit Hospital, Bath.

‘We didn’t know the gender – we just wanted him to be healthy,’ Cassie said.

‘Becky was an absolute star during labour, it was the most incredible moment of my life.’ 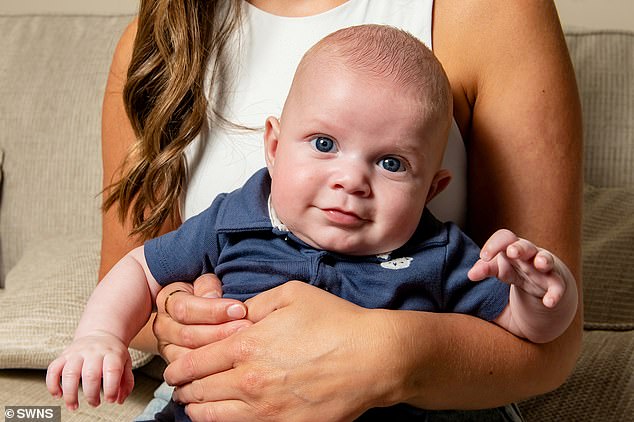 The couple are now in the process of filing a parental order to become Barnaby’s legal parents and are enjoying time together as a new family.

Cassie said: ‘We’re currently in the process of filling out a parental order Barnaby because legally, he’s not ours.

‘That’s the hardest thing for us – we didn’t realise that was something we’d have to do.

‘But Becky and Jamie have been so relaxed and reassuring.

‘Becky has been an incredible friend – she went above and beyond for us. I honestly cannot thank her enough for everything she’s done.

‘Barnaby just the best baby – so chilled and happy. I never thought I’d have a baby this way, and now our little boy has this amazing, extended family.

‘We all feel very lucky.’

WHAT IS CERVICAL CANCER?

Cervical cancer affects the lining of the lower part of womb.

The most common symptom is unusual bleeding, such as between periods, during sex or after the menopause, but other signs can include: