A bride-to-be accidentally swallowed her engagement ring in a bid to ‘protect it’ during a terrifying nightmare.

Jenna Evans, from San Diego, California, had been dreaming of a ‘very sketchy situation involving a high speed train and bad guys’ before she woke up to realise that she had ingested the item of jewellery on her finger.

A shocked Jenna was then rushed to hospital on September 11 where doctors had to perform an upper endoscopy in order to retrieve the ring that had made its way down to her intestines.

She later took to Facebook to share her X-rays with social media users alongside the caption: ‘I swallowed my engagement ring in my sleep on Tuesday night. I actually remember doing it, but I thought I was dreaming, so I went back to sleep.’ 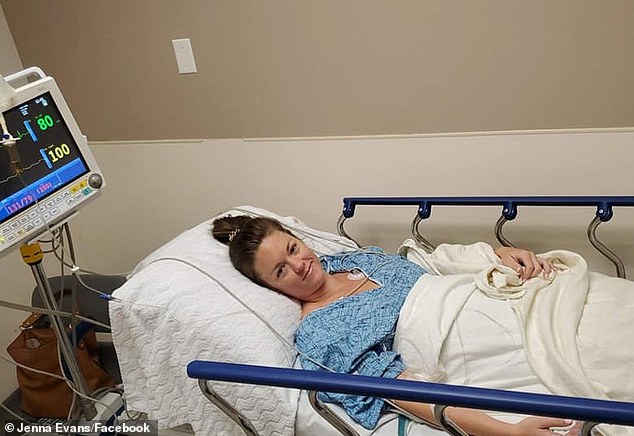 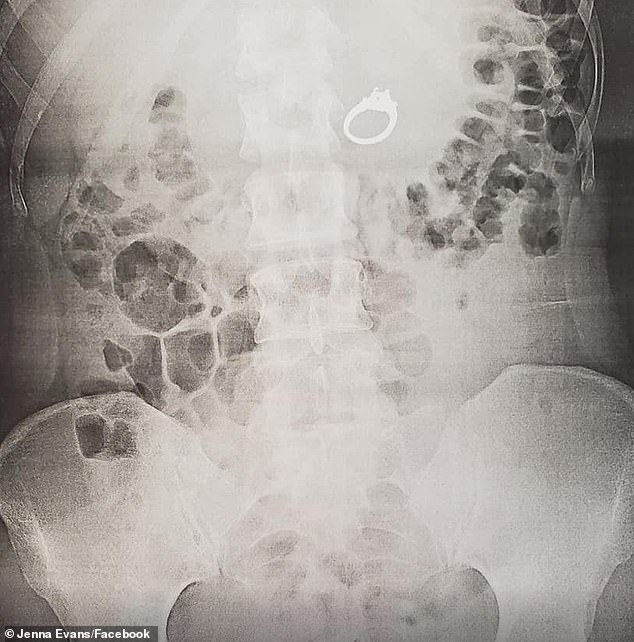 She continued: ‘On Wednesday morning, I realized my ring was not on my hand and had to wake Bob Howell up and tell him that I swallowed my engagement ring. I don’t think he believed me right away.

‘We laughed pretty hard for about an hour and a half, called my mom, laughed until we were crying, googled ”do other adults swallow rings” because kids do it all the time, but apparently it’s less common for adults.

‘I went to urgent care where I struggled to explain why I was there, because I was laughing/crying so hard. The doctor ordered an X-ray and seemed pretty shocked when she walked back in with a second doctor and showed me that sure enough, my ring was right there in my stomach!

‘They called a gastroenterologist and decided it would be best NOT to let nature take its course. (Thank God) Before I left, she recommended seeing a sleep specialist as well.

‘Bobby took me to the GI doctor where I got to tell a whole new group of doctors and nurses that yes, I swallowed my engagement ring. At this point, I could definitely feel it in my guts, it was starting to really hurt and make us nervous. 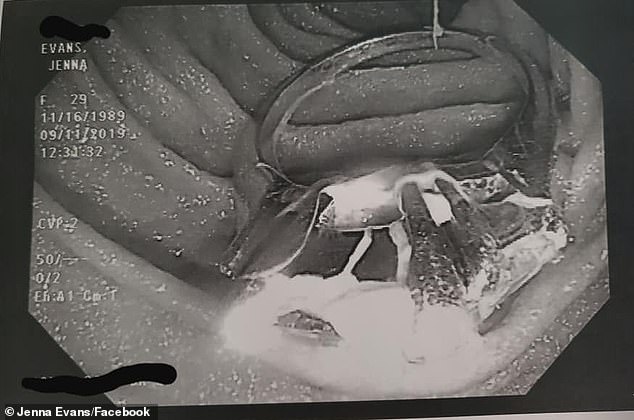 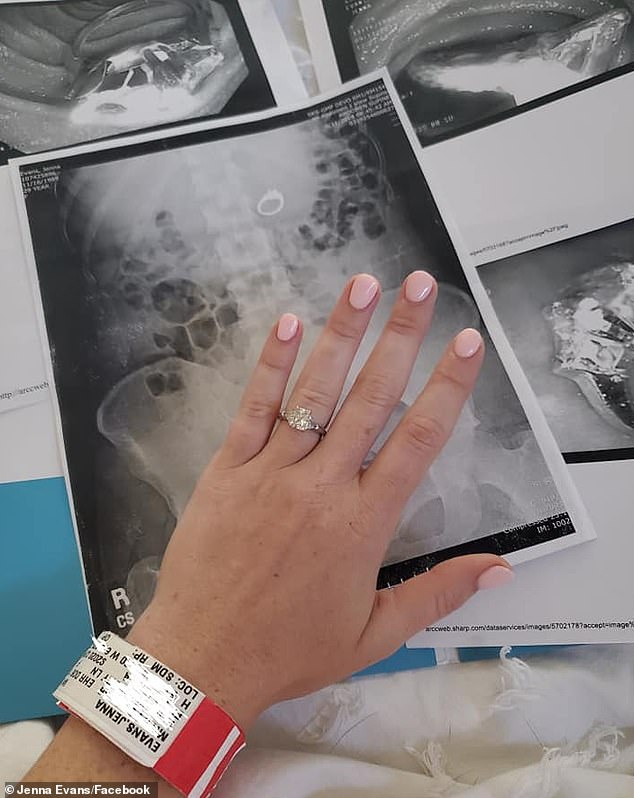 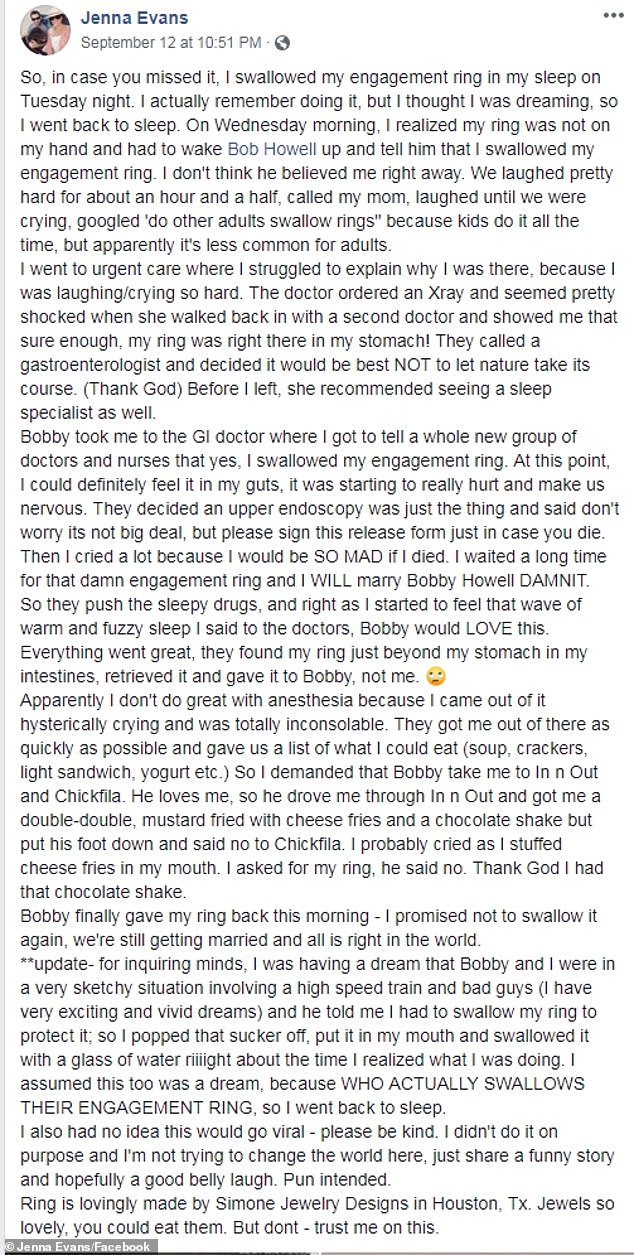 ‘They decided an upper endoscopy was just the thing and said don’t worry its not big deal, but please sign this release form just in case you die.

‘Then I cried a lot because I would be SO MAD if I died. I waited a long time for that damn engagement ring and I WILL marry Bobby Howell DAMNIT.

‘So they push the sleepy drugs, and right as I started to feel that wave of warm and fuzzy sleep I said to the doctors, Bobby would LOVE this. Everything went great, they found my ring just beyond my stomach in my intestines, retrieved it and gave it to Bobby, not me.’ 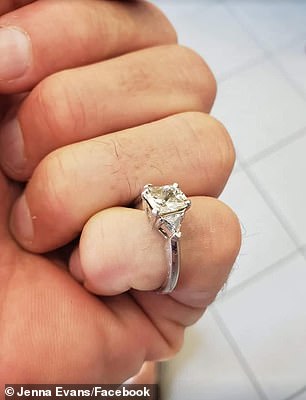 Jenna went to praise her fiance Bob who drove her to the fast-food chain In n Out and treated her to a Double-Double Burger with cheese fries and a chocolate shake.

She continued: ‘Apparently I don’t do great with anesthesia because I came out of it hysterically crying and was totally inconsolable.

‘They got me out of there as quickly as possible and gave us a list of what I could eat (soup, crackers, light sandwich, yogurt etc.) So I demanded that Bobby take me to In n Out and Chickfila.

‘He loves me, so he drove me through In n Out and got me a double-double, mustard fried with cheese fries and a chocolate shake but put his foot down and said no to Chickfila. I probably cried as I stuffed cheese fries in my mouth. I asked for my ring, he said no. Thank God I had that chocolate shake.

‘Bobby finally gave my ring back this morning – I promised not to swallow it again, we’re still getting married and all is right in the world.’

In an effort to answer how she managed to swallow her ring the first place, Jenna added: ‘I was having a dream that Bobby and I were in a very sketchy situation involving a high speed train and bad guys (I have very exciting and vivid dreams) and he told me I had to swallow my ring to protect it; so I popped that sucker off, put it in my mouth and swallowed it with a glass of water right about the time I realized what I was doing. 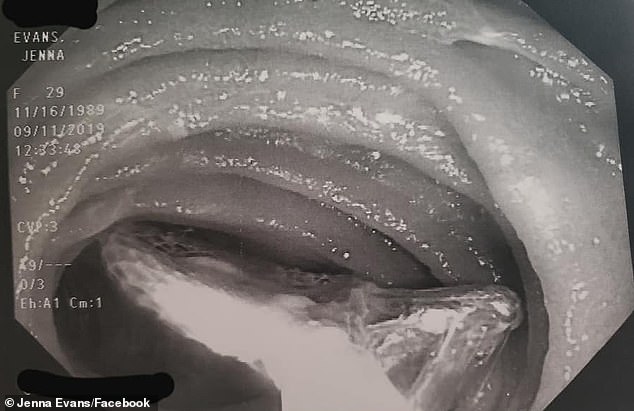 ‘I assumed this too was a dream, because WHO ACTUALLY SWALLOWS THEIR ENGAGEMENT RING, so I went back to sleep.

‘I also had no idea this would go viral – please be kind. I didn’t do it on purpose and I’m not trying to change the world here, just share a funny story and hopefully a good belly laugh. Pun intended.

‘Ring is lovingly made by Simone Jewelry Designs in Houston, Tx. Jewels so lovely, you could eat them. But don’t – trust me on this.’