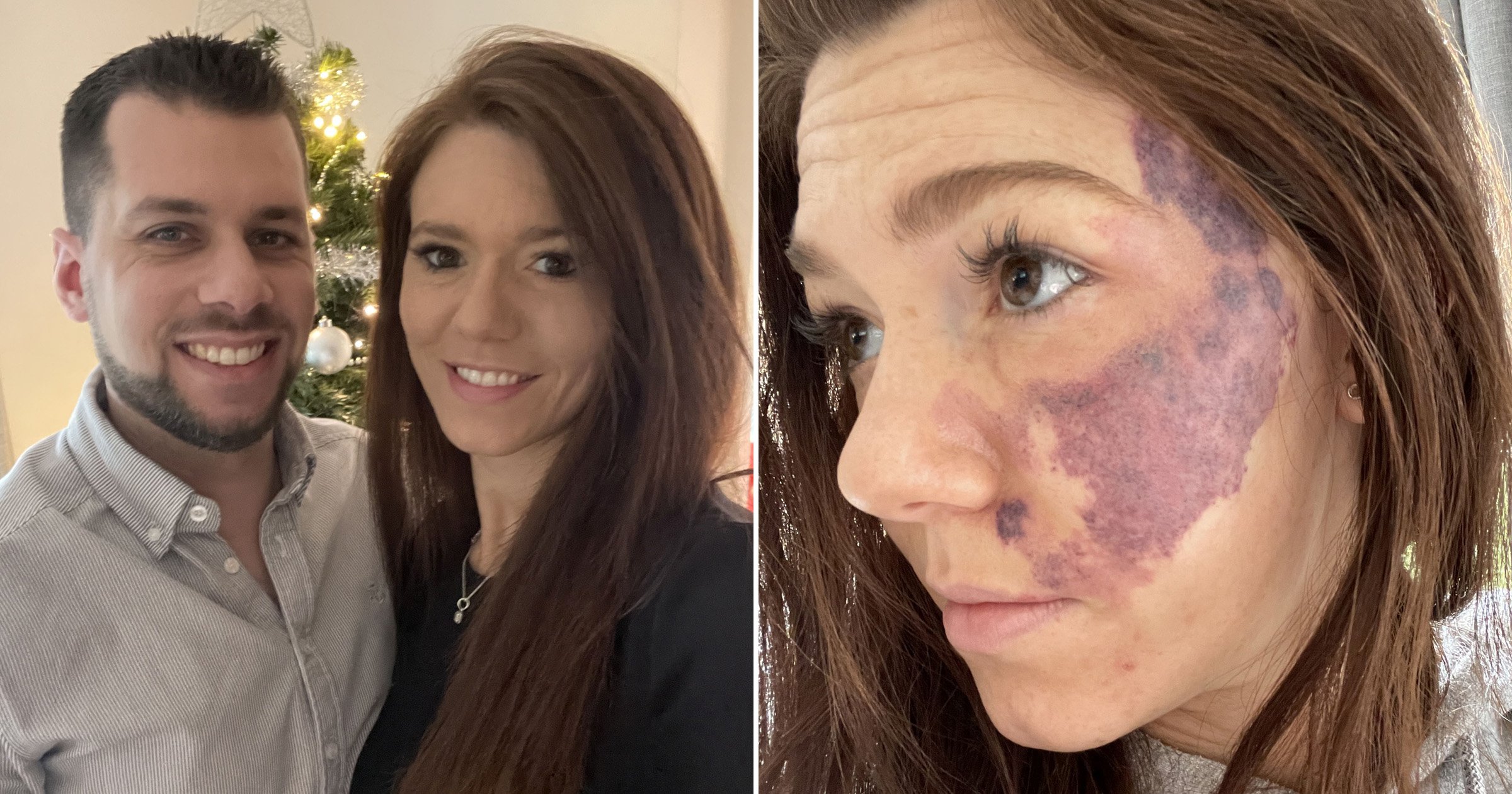 Showing a partner your makeup free face can be a daunting experience.

It puts you in a vulnerable position and can take a long time to work up the courage to do so.

For one woman who has been with her partner for five years, she still hasn’t taken this step.

33-year-old Emily Hallett from Surrey was born with a birthmark that covers almost half of her face.

She is so self-conscious about the mark that she refuses to let her fiancé, Adam, 33, see her without foundation.

Emily even wears makeup to bed.

The mum-of-three says she wakes up before Adam to cover the mark with foundation and reapplies it after a shower.

Emily has been with Adam for five years but explains years of severe bullying have intensified her insecurities.

It became so bad that Emily had to be transferred to a boarding school.

‘My partner hasn’t seen me without makeup,’ she said. ‘He knows it’s there because you can still see it with makeup. I hate it, I think it’s disgusting.’

‘I don’t take my makeup off and I top it up constantly throughout the day. When I shower in the evenings, I put it back on before I go to bed. I get up first to do my makeup in the morning but if Adam is having a lie in, I go downstairs to do it.

‘When we met, I felt like I had competition and I wanted him to be attracted to me. I told him I didn’t like talking about my birthmark and I gave him firm rules about it and he’s accepted that and we don’t talk about it. It’s not part of me.’

‘It bothered me when I was young. I hated the school that I was in,’ Emily recalled.

‘They would say anything, my mum said they’d laugh, stare and call me names. They’d call me burn face. It was mainly the boys. I was quite affected by it.

‘I didn’t have a lot of friends, I just went with anyone who took to me. I didn’t want to talk to people because I didn’t know what people thought. My mum would tell me I had a back bone and to ignore it. I just kept myself to myself.’

When Emily met her first boyfriend at 18, she started wearing makeup constantly.

‘I didn’t find makeup until that age,’ she explained. ‘I wish I’d asked my GP for advice on makeup. I started working at a pub and met a man who was interested in me.

‘I never thought I’d find anyone. It made me more confident when I found make-up because I could cover it up. I’ve hidden it ever since.

‘I get random people saying that it’s an awful burn or asking what I’ve done to my face. Sometimes I’ll see a man looking at me and think it’s because he finds me attractive then I realise it’s probably the birthmark.’

Up until the age of 14 Emily had laser treatment to help reduce the colouring and stop the birthmark growing and becoming raised.

As the treatments are expensive at £600 each, Emily has set up a GoFundMe page to help pay for a further eight treatments.

‘Last year my daughter showed me a filter on TikTok which shows you yourself from how other people see you and I was mortified,’ she says.

‘I looked so ugly and my face looked so wonky. And now, when I put my mascara on, it rubs on my cheek so I know it’s raising.

‘It’s grown with age and it’s a lot darker. It gets darker depending on the time of year and hormones. The colour changes, it goes from purple to pink. It’s all I think about and it’s constantly on my mind.

‘The laser treatment just decreases it and stops it from going lumpy or raised which is my biggest fear. Menopause can change it.

‘It should help the colouring as well.’

You can donate to Emily’s GoFundMe here.