Cardi B is no stranger to making headlines and continues to have fans interested in her family life.

As previously reported by Billboard, the “I Like It” chart-topper started dating her husband Offset in 2017. Despite their on-and-off relationship, the pair is together and has expanded their family. In July 2018, the Grammy Award-winner welcomed their first child, daughter Kulture Kiari Cephus, and recently announced they were expecting another. In true Cardi fashion, she kept her pregnancy a secret and revealed she was having another baby during her 2021 BET Awards performance with Migos. Unsurprisingly, fans were excited for the duo to become parents again.

Throughout Cardi’s pregnancy journey, she has kept her loyal 108 million Instagram followers up to date by sharing snapshots of her growing bump. On August 31, she shared a number of images of her with Offset where she appeared to be due very soon. “Sooo proud of you my dear @offsetyrn May God protect you and lead you in the right paths,” she captioned her post. Since that upload, Cardi informed fans she had given birth to a baby boy. Keep reading to find out more. 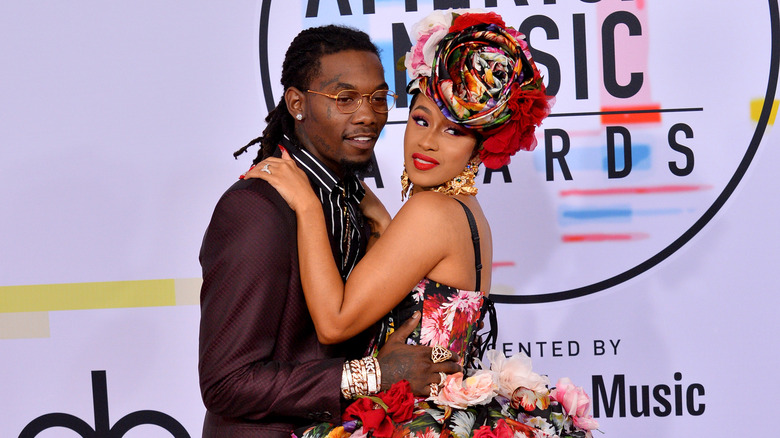 On September 6, nearly one week after her last Instagram upload, Cardi B took to the social media platform and posted a snapshot of herself in a hospital bed next to her husband Offset. Cardi held her newborn baby in her arms who was wrapped up in a blue blanket. For her caption, the “Be Careful” hitmaker revealed their date of birth, September 4, 2021, and put the dinosaur, blue heart, and teddy bear emojis. In the span of 18 hours, Cardi’s post racked up more than 12 million likes, proving to be instantly popular.

In a statement sent to People, Cardi and Offset revealed they had a boy. “We are so overjoyed to finally meet our son,” they said. “He is already loved so much by family and friends and we can’t wait to introduce him to his other siblings.” This is Cardi’s second child with her husband while this is Offset’s fifth child overall, according to the Daily Mail.

Offset also used Instagram to announce the exciting news to his followers and uploaded a pic of him holding his son in his arms while laying on a separate bed next to his wife, writing, “Chapter 5.” As of this writing, a name for their child has yet to be told. Congrats Cardi and Offset!