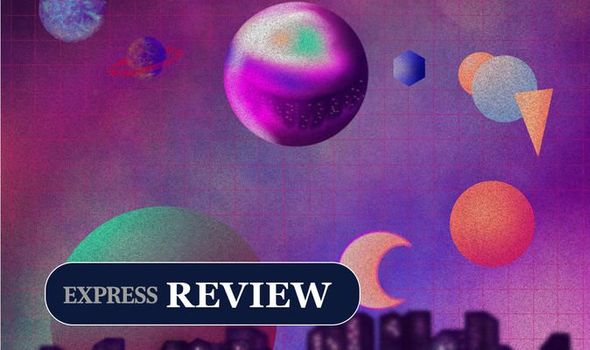 It isn’t often that a new synthwave band arrives on the scene with their style and expertise seemingly already fully formed – but that’s exactly ​what Infra Violet ​has done. The band is made up of Toby Campen and Bethany Munroe, a producer and a singer respectively. Together their dreamy music is a wondrous constant through their debut 10-track EP, Dream Tether.

I always get a little worried while I’m wading into a relatively new band’s first-ever album – especially in electronic music. Sometimes it can get really ugly, full of cliches, echoes of previous artist’s works, or straight-up rip-offs.

I am thrilled to report Infra Violet are ​an exception to the rule.

From Dream Tether’s first track, Polaroid, it is obvious how different, interesting and heady this artistic duo is.

Toby’s production, throughout the entire album, is pristine. It is obvious the maestro has worked tirelessly over every second of the record.

In particular, what is most impressive about Dream Tether, is that each song feels like ​it cast​s a​ shadow​ over ​another ​part of the album.

​Every single track compliments the previous and the next. They all sound profoundly different while staying ​within their margin of error, making each song a piece of a perfect puzzle.

Toby and Bethany also confidently prove they are some of the most versatile producers in the scene.

While never straying too far from their chosen genre, they deftly dodge the cliches found within synthwave​ ​while encroaching into other areas of music.

Wanderlust evokes singer-songwriter vibes with an acoustic guitar (more on that later), while the aforementioned Polaroid cuts deep with relentless synths and clean keys, complete with an exceptionally catchy chorus.

Track five, Mess, takes the same approach as Polaroid but with a more sombre outlook. The unbelievable music behind Bethany’s beautiful vocals ​are just perfect to ​listen to on any lazy afternoon.

Radio is equally as much of a show-stopper. This song, specifically, has so much, musically, going on inside it. Toby has thoughtfully and meticulously layered so much love into these songs; the scene has never ​seen something this cared-for. (Also, is that a sitar in there? I really can’t tell but it absolutely works?)

I don’t feel like Toby’s journey is complete in Dream Tether, however. Bethany is quite obviously the main focal point of the record – rightly so! – and she is backed up perfectly by ​the producer’s stunning musicality. But it seems to me that an instrumental exploration of the pair’s talents would have gone a long way.

​A great example of the band’s versatility is in Deny, a powerful and brazen​ track that feels like its restraints have been cut, creating more of a floor-filler than anything else.

​Bethany’s ethereal voice floats through endless snare and hi-hat fills, ushering in some dance-anthem building blocks, right down to its DNA.

Musically, Deny is the darkest track on the record but it is easily the most thrilling. It even has a drop before the big finish. It ​is one to hit repeat on.

However loud and exciting Deny is, the strongest pieces of Dream Tether come from Bethany’s more thoughtful inclusions.

It’s difficult to express how amazing Bethany is on this album.

From Polaroid to Water, her voice is distinctive, strong, effortless and dedicated.

Her voice is just one half of the dreamscape, however. The lyrics behind each song are quite obviously ripped from her real-life experiences. Heartbreak, disappointment, betrayal; she lays it all out for the world to see – which in and of itself is admirable – but she has somehow made it all so inspiringly catchy.

For the first time in a long time, synth fans have received an album with actual heart ​in it – not just parroted musings about sunsets over highways.

Wanderlust is the perfect example of this (perhaps the album’s best song). The touching lyrics are introspective, pensive and emotionally intelligent; something rarely seen​ in the scene​. Bethany’s performance on the song creates a serene soundscape that sometimes borders on soliloquy. Really stunning stuff.

Infra Violet – Dream Tether is an excruciatingly personal album full of 80s-inspired choruses and retro-styled tracks that beg to be played on repeat. A more focussed instrumental venture would have been welcomed, but Toby and Bethany’s collection of songs wonderfully blend singer-songwriter hooks with memorable backings. The emotional root of every song is palpable, something that isn’t present enough in a lot of songwriting; these two are the beginning of the next step of synthwave.

Infra Violet – Dream Tether is out now. Buy it here.