Jack Harlow has looked up to a number of rap idols since he was a kid. And now that he’s a charting artists, his work is being compared to what his heroes put out. But one thing the “First Class” rapper wonders is, why it seems like male rappers tend to only compare their work to their male peers.

In a Rolling Stone interview, Harlow spoke about what he’d noticed regarding his male peers.

“Maybe that’s a patriarchal thing,” he said. “I’m somebody that loves Nicki Minaj, loves Dej Loaf. And I’m not saying that because we’re doing an interview. I love these artists because they’re ill. I love the way they use their voice. I love the way they write. There’s something to pull from. I loved Fergie. I love Gwen Stefani.” 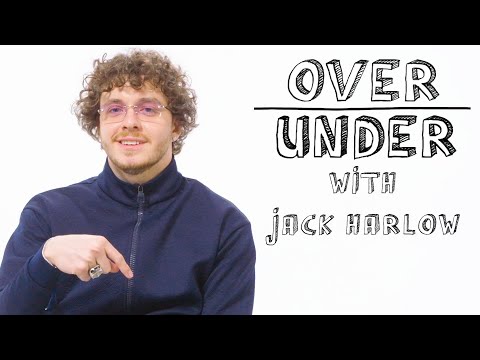 In addition to loving and learning from Nicki Minaj, Dej Loaf, Fergie, and Gwen Stefani, Eminem and Kendrick Lamar are two huge influences for Harlow.

“We’re a couple years away from everyone reviving that s*** as a culture and being like, ‘Look at this s***,’” he said. “And everyone’s gonna pay their rightful respects again. No matter how the production ages to people, like, he put so much into his words that it immortalized him, even though that s*** aged as ‘circus music’ to [some] people.”

And then of course there’s Kendrick Lamar, who Harlow wanted to emulate at a young age.

“I remember being in middle school, and listening to ‘Rigamortis’ by Kendrick Lamar, and thinking, ‘This dude is the best alive. And that’s what I want to do.’ We need more people in our generation that are trying to be the best,” he said.

Harlow will take his female rap heroes at any age. But when it comes to dating, Harlow says “there’s no upper limit.”

“Maybe it’s an Oedipus complex,” he said, laughing. “I like somebody I can learn from. And that’s for real. It sounds, like, sly, but really, I think that’s part of the appeal is somebody has definitely seen more than me, has got some years on me. I remember one time I tweeted, ‘I love when a girl has kids, because it’s like, Oh, you’ve definitely f***ed.‘ What’s crazy is I knew it’d be funny, but that’s really how I feel. If a girl’s had kids, you’re like, ‘Oh, yeah, you’ve gone there.’”

While Harlow is open to a serious relationship, he’s “not on active hunt.”

“I’m definitely not somebody that’s like, ‘I’m 23, I ain’t gonna find the one right now.’ There’s no reason for that,” he said. “I just take things as they come. So I’m receptive.”