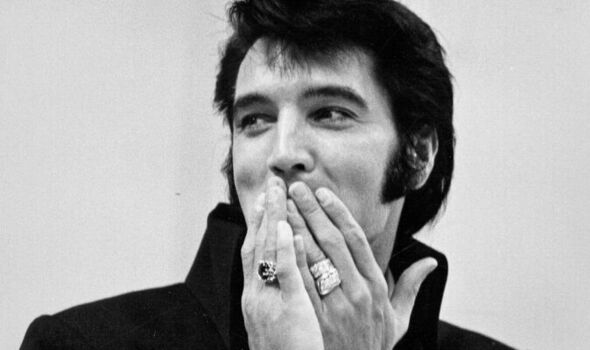 In a new book, his pilot Ron Strauss reveals that the singer was so worried about dying in a crash that he would order his flight crew to be ultra-cautious and ignore any demands to the contrary from his management team. According to Ron, Elvis said: “I want to tell you guys right now that I’m a little uneasy about flying. Don’t let security or anyone else talk you into flying if the weather looks bad. If you’re unhappy with anything mechanical on this plane you tell me, because I can easily get another plane. Don’t let anyone talk you into anything.”

Now 83 and living in Florida, Ron has opened up for the first time about flying the King as this year’s Baz Luhrmann-directed movie about the rock legend continues to enthral fans.

He reveals that gun-loving Elvis once insisted on bringing a loaded pistol with him onboard, despite the obvious dangers, and that his crew were ordered to ignore a bomb scare so they could take him back home to Graceland in Memphis, Tennessee, in good time.

The new book, co-authored by Ron and historian Sally Hoedel, gives unparalleled insight into life onboard the Lisa Marie.

That is the name Elvis gave to the lavishly furnished private jet he named after his only daughter. It was also known as Hound Dog 1.

Ron recalls the first time the star was invited to sit in the jump seat in the cockpit.

After Elvis immediately said “sure”, Captain Elwood David decided to spook him by turning to Ron and asking, “You got the manual on how to start this thing?” Ron describes fishing around for it, hitting buttons as red flashing lights went off, at which point Elvis said: “I think I’ll just go to the back, guys.”

Elvis’s fear is likely to have originated from an incident in 1956 when a chartered flight carrying the young singer lost an engine over Arkansas.

It eventually landed safely, but the close call made him reluctant to get back in the air again.

He travelled mainly on trains, buses and cars afterwards. It was only the demands of touring that eventually forced him to return to chartering planes and borrowing private jets from other celebrities, including the now deceased Playboy founder Hugh Hefner.

Yet in January 1975 Elvis surprised his “Memphis Mafia” entourage by announcing he wanted to buy a plane of his own. Some attributed the sudden splurge to a midlife crisis – he had just turned 40.

“Elvis was afraid to fly,” close friend Lamar Fike is quoted as saying. “He’d had a near crash in 1956 and he promised (his mother) Gladys he would take a train or a car or a bus after that.”

“He got airsick too. The few times we’d fly to LA he’d throw up. He always had to have two barf bags in his seat.”

Ron entered the King’s gilded flight path by sheer chance. Raised in Iowa in the Midwest, he had planned to serve with the US Air Force until he retired but ultimately stayed for 12 years until being discharged in 1970, having become disillusioned with the Vietnam war.

He studied for his private pilot’s licence and got a job as a flight engineer with the now-defunct Modern Air. His work took him to West Berlin where his aircraft would often be menaced by Russian fighter jets known as MiGs as it negotiated the 20-mile-wide air corridor that led from the city to West Germany during the Cold War.

Modern Air ran a fleet of nine Convair 880s and Convair 990s, which were among the fastest and most gas-guzzling planes in the world.

When Delta airlines decided to sell off their models, Elvis saw the chance to snap up a bargain Convair 880 for $250,000. Ron became co-pilot after being recommended by a former colleague at Modern Air. His salary was $29,000 a year, the equivalent of $150,000 in today’s money.

Expense was clearly no object as Elvis set about making his plane fit for a King. The interior was finished in stained teakwood; emerald greens, browns and blues set the tone throughout the aircraft.

The bedroom featured a queen-size bed costing $13,000, complete with a seatbelt that stretched across the width to meet FAA requirements. The gold faucets alone in Elvis’s private bathroom cost $800. The conference room portion of the aeroplane featured six chairs costing $7,000 around an oval table. The lounge area included two couches, at $22,000 each.

“The interior is like a millionaire’s penthouse,” commented businessman Nigel Winfield at the time. “He has the finest executive jet in the world. Air Force One is nothing compared to it.”

Despite his fear of flying, Elvis seemed to enjoy hopping around on the Lisa Marie.

His crew would regularly be asked to drop everything in the middle of the night to transport him from Graceland to favoured holiday spots in Palm Springs, California, Vail, Colorado or Honolulu in Hawaii. The jet was known as Hound.

Dog 1 to air traffic control although the singer referred to it as “Flying Graceland” or “The Pride of Elvis Presley Airways”.

On occasion, a worker monitoring the flight would ask if it was really Elvis’s plane. Ron would reply: “It sure is. Do you want to talk to him?” Then Elvis would get on the radio and say, “This is Elvis. How is everyone doing?”

The Lisa Marie quickly became an important symbol to the fans too, as spotting the TCB (Taking Care of Business) logo on her tail meant that Elvis Presley was in town. When Elvis boarded, he would always stop in the cockpit to say hello and his girlfriend Linda Thompson would greet the crew with a kiss on the cheek.

One time, Linda walked in wearing a Native American outfit. Ron’s mouth dropped open. Elvis quipped: “Don’t even think about it, Ron.” To which Ron replied: “As if I have a chance.”

But the star’s demons began to swirl after he separated from Linda in 1976. One day, Elvis walked onto the plane with a 45 pistol stuffed in his pants, visible above the belt.

Ron asked, “Hey Elvis, is that thing loaded?” Elvis responded, “Of course it is. What’s the point of a gun with no bullets in it?”

Ron said: “Having a loaded gun in a pressurised cabin might not be the best move.”

In Texas, Elvis got impatient waiting for his plane’s catering service to turn up so the stewardess called the local McDonald’s and placed an order for 50 burgers. She made the mistake of dropping the star’s name as she placed the order. When the crew arrived to collect them, they had not been made. Ron said: “They thought the phone call was a hoax, so they had to hurry up and make those burgers.”

A bomb scare close to dawn as they were about to take off was no laughing matter.

The red flashing lights of a squad car was the first warning as the police voiced their concern.

Elvis’s response was: “Take us to Memphis,” so Ron insisted on flying at 22,000ft in case the bomb exploded and the cabin suffered a sudden decompression, forcing them into a dive.

Ron added: “Flying Elvis Presley meant you had to be ready to roll with the punches. That’s what we signed up for too.”

Sadly, despite owning his own set of wings, Elvis never achieved his dream of touring outside the US. His manager Colonel Tom Parker refused to allow him to, citing security issues, although many fans believe he was more worried about his dubious immigration status.

Whatever the truth, the $500,000-a-year operating costs of the Lisa Marie forced Elvis to tour relentlessly, despite his failing health.

He died at his Graceland home on August 16, 1977, as his crew were preparing to fly him to Portland, Maine, for yet another show.

Ron attended his boss’s funeral and after the Lisa Marie was sold six months later, he got a new gig flying for the delivery company UPS until he retired in 1999. He said: “Flying for Elvis had a professional and personal impact on my life. I knew a lot of people in aviation before that job, but when it was over it did change things.

“When I interviewed at UPS, they took one look at my resume and asked, ‘Were you really a pilot for Elvis Presley?’ and the next thing they said was, ‘You’re hired!’

Destined to Fly: The Story of Pilot Ron Strauss – from Iowa to Elvis, is available to buy on Amazon.com and www.ElvisAuthor.com