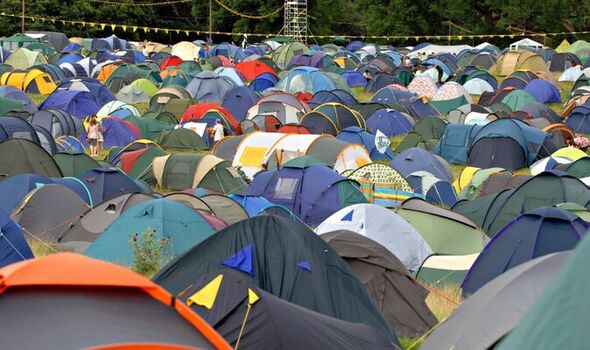 But Womad – which celebrates its 40th anniversary this year – was named the worst (15 percent), along with Bestival (15 percent) and Strawberries & Creem (15 percent).

The study, commissioned by hoo, a hotel booking site which lets holidaymakers make an online offer for a better deal on hotel rooms, found 36 percent of those polled will be attending at least three festivals this year, while 21 percent have splashed out on tickets to more than five.

While sleep may not be top of the agenda, 74 percent of men admitted it is important to them compared to women (70 percent).

And 72 percent think more should be done by festival organisers to tackle the issue of sleep deprivation, including providing adequate sleeping areas and information about how their sleep may be affected.

It also emerged 18 percent anticipate they will manage only two-three hours of sleep a night while 45 percent only expect to get four to five hours.

VIP glamping (16 percent) was named the perfect sleeping arrangement, followed by 15 percent who look for something more luxurious with a helicopter or chauffeur-driven car to a nearby hotel in order to sleep in a proper bed rather than a tent – and even a butler to tuck you in and make you breakfast in the morning (12 percent).

Problems with sleeping have led to many to look at staying away from festival grounds this year with 39 percent admitting they would rather stay at a hotel and travel back and forth to the site than attempt to slumber in a tent.

And a 61 percent are jealous of pals who check into a nearby hotel or B&B, while 79 percent would welcome the opportunity to bid on a hotel room to bag a bargain near a music festival to avoid camping on site.

Adrian Murdock CEO of hoo said: “This year we expect the festival season to return in a big way, and while this is a time for all to have fun after Covid restrictions have ended, we must remember to take care of ourselves.

“This is why we created this study to bring to light an issue that will affect many festival-goers this year.

“Many will be planning on simply settling for camping and a poor night’s sleep when attending a festival this year, when in actual fact there is always a deal to be had on a nearby hotel to ensure that you get the best night’s sleep possible.”

The study, commissioned via OnePoll, also found that when it comes to dealing with the lack of sleep, 39 percent will turn to alcohol to get them through.

Generation Z – those in the 18-25-year-old category – are far more clean-living, with 37 percent preferring to eat their way through their exhaustion fug, more than any other age group.

And more men (33 percent) than women (30 percent) have opted for a massage at a festival to deal with their sluggishness at an on-site spa.

But while a lack of sleep at festivals will be a problem for many this year, it ranks as only the ninth worst aspect of going to a festival with outside toilets (27 percent), lack of hygiene (26 percent) and queues for food and drink (24 percent) at the top of list.

Top 10 worst aspects of going to a festival:

The outside toilets: 27 percent

The lack of hygiene: 26 percent

The queues for food and drink: 24 percent

Noisy people in nearby tents: 22 percent

People falling into your tent: 21 percent