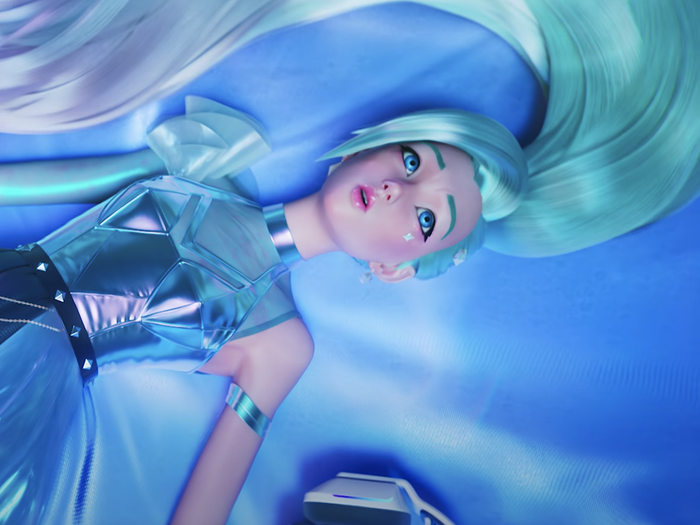 On Thursday, a woman who identified herself as Stephanie, said in tweets and a post on Medium that she believed that the newest "League of Legends" video game character, Seraphine, may have been based on her.

In a Medium post titled "The Problem With Seraphine," Stephanie says that she thinks Seraphine is based on her, citing similar traits she shared with the character as well as a relationship that she had with a former Riot Games employee in early 2019. The company develops "League of Legends" and created Seraphine.

Seraphine is already a contentious figure

Seraphine is already a contentious figure in the "League of Legends" community. A new champion from the in-game city of Piltover, she uses her singing and gift to hear souls to attempt to heal the relationship between the cities of Piltover and Zaun. She uses technology powered by a hextech crystal, which runs on the stolen souls of a race called the Brackern, and can communicate with the soul inside her crystal. That lore alone has made her a controversial figure.

Seraphine was introduced through a social media campaign that made her appear to be an influencer in something close to our world. In that universe, she quits her day job to pursue her dream as a singer and collaborate with "League of Legends" pop group K/DA. The campaign was controversial given that Seraphine would occasionally discuss her lack of self-confidence and mental health on social media, leading some to accuse Riot Games of using those issues to foster a parasocial relationship between Seraphine and fans.

Riot Games writer Bethany Higa, who wrote Seraphine's tweets, told Polygon that much of Seraphine's story came from her own struggles with self-doubt and imposter syndrome. However, creative director Patrick Morales told Polygon that "we also recognize that the story we chose had an unintended impact outside of the narrative that we were trying to tell."

In her Medium post, Stephanie explains her claim and the similarities that led her to believe she may have been the basis for Seraphine

In the post, Stephanie writes that she was in a three-month relationship with a Riot Games employee in early 2019, who she identifies as "John." She claims that John was not a character or skin designer at Riot, but would frequently talk about his work at the company and say that he was suggesting "skins" (in-game cometic modifiers) that seemed to be based on Stephanie. She wrote that John claimed he was involved with K/DA's first skins, and that he "definitely implied that he could influence the project."

Stephanie writes in the post that when she accepted John's invitation to tour Riot's headquarters in Los Angeles, he had publicly displayed and internally distributed a piece of writing she had done on Piltover and Zaun, two cities that are part of Seraphine's lore. She also claimed that he gifted her with posters and custom art that showed her as a "League" champion, which she showed in the post and said "Riot illustrators drew based on what he told/showed them about me."

Stephanie says in the post that their relationship ended when she canceled plans to see him, after which he blocked her.

Stephanie said that she and Seraphine share a variety of similarities

In the post, Stephanie described some of the similarities that led her to believe that Seraphine may have been based on her. Those similarities include their names, pink hair, photos with cats, doodling style, among other details.

Stephanie also alleged that "while John never explicitly discussed anything concrete, he did mention a K/DA related 'surprise' of something that would release around [her] birthday, which is on September 19th." Stephanie didn't say when this comment was made but did say earlier in the post that the two stopped talking in mid-2019. She then said that one of the only images from Seraphine's Twitter account that features a date explicitly within the image itself is tied to September 19. That image was tweeted on September 19, 2020.

In Stephanie's post, she wrote, "While I don't know exactly what happened with her development, I didn't make this up — I've hired a lawyer, and I'm seriously considering legal action."

In a statement provided to Insider, a Riot Games spokesperson said that "We take all claims of misappropriation seriously and immediately investigated [Stephanie's] allegations after receiving a legal demand letter from her attorney last month. We confirmed that her claim of being the basis for Seraphine lacks merit, communicated this to her attorney, and invited him to further discuss the facts with us. We are still waiting for a response."

The statement also says that Seraphine was "created by Riot Games and was not based on any individual, including [Stephanie]," and that the former Riot Games employee that Stephanie referred to "left Riot more than a year ago and was in a department and role that has no input whatsoever into the creative design process."

Insider has redacted mentions of Stephanie's last name per Riot Games' request and given that it is not public on any of her own social media.

Stephanie's claim that Seraphine may have been based on her was met with both skepticism and support on social media. Many focused on an October 29 tweet from Riot Games Senior Game Designer Jeevun Sidhu, whose Twitter bio says that he worked on Seraphine. In the tweet, he says, "Seraphine is a star that makes everyone around her shine just a little bit brighter. That was very easy for me to capture in her gameplay, since I get to shine brighter by being around @RiotWhiskies every day. Thank you to my favorite person in the world for the inspiration."

@RiotWhiskies, whose bio lists a ring emoji next to Sidhu's handle, has recently posted Seraphine cosplay photos on Twitter.

Recent quote tweets of Sidhu's tweet show it being leveraged in the comments of Stephanie's tweets about the situation, either in arguments with other Twitter users about the validity of her claims or in direct response to Stephanie herself.

Stephanie appears to have addressed those responses on Twitter, referencing Riot Games' statement and writing, "it's odd she's 'not based on any individual' when people who disagree are posting… Individuals she's based on."

Janelle Wavell-Jiminez, the founder of Stellari and a former "League of Legends" product manager, posted a thread about Stephanie's claims as well.

"Having been a lead on skins, but no longer at Riot: no one on the champ/skins team would take a random Rioter's love interest and use that as a basis for a million dollar business decision. It's annoying that some Riot dude tried to mislead her about what he could do," Wavell-Jiminez wrote on Twitter.

Riot Games has sustained similar allegations in the past

EuroGamer reported in 2017 that Edgar Davids, a former Dutch football player, won a lawsuit against Riot Games that year over the company appearing to use his likeness as a character skin in the game. The lawsuit reportedly referenced a tweet from a Riot staffer that said that the skin, "Striker Lucian," was inspired by Davids.

The company also came under fire in the latter half of the 2010s following a 2018 report from Kotaku in which current and former employees at the time alleged a culture of sexism at the company.