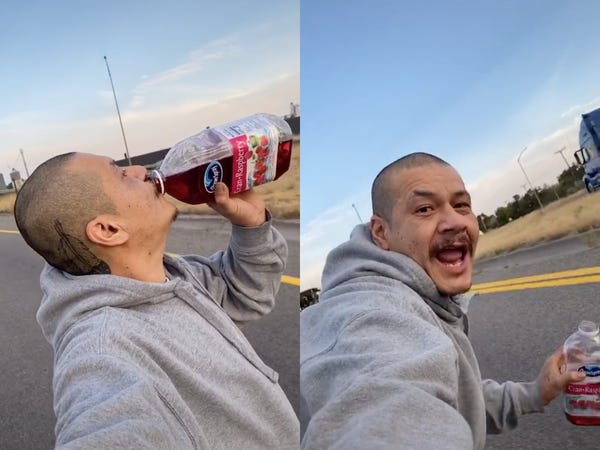 2020's biggest viral star has launched a Halloween costume in his own personal merch store, complete with tube socks and a crewneck sweatshirt that reads "Steady Vibin" — Cranberry juice, longboard, and Fleetwood Mac soundtrack not included.

Nathan Apodaca, 37, also known by his TikTok handle @420doggface208 or the mononym "DoggFace," recently was catapulted into mega-viral stardom after posting a now-iconic TikTok video that showed him lip-syncing along to Fleetwood's 1977 hit "Dreams" while longboarding and drinking cran-raspberry juice.

Now, just over two weeks after Apodaca originally posted the video, it's amassed approximately 8.7 million likes and over 50 million views on just TikTok alone, and celebrities ranging from Dr. Phil to Mick Fleetwood himself have recreated the video.

Apodaca announced the Halloween costume on social media. "Just want to say, you know, thank you for everything that's been going on, thank you for all the blessings that've been coming my way," he said in the video. "I got a costume coming out for Halloween. I know it's funny and everything, people might laugh at it, but you know what it is, making moves, you know!"

You can buy the DoggFace Halloween costume, and the rest of Apodaca's merch line, on his website.

Apodaca has been selling his own merch for a while. He told The LA Times that he had bought an embroidery machine to embroider beanies to sell as merch emblazoned with "DoggFace" or phrases like "Down Foo!"

He told Insider that his merch sales had exploded since his video went viral, and while he's no longer hand-making his beanies, he still has a stack that he plans to embroider as a special run. Now, his merch store features t-shirts and hoodies emblazoned with an image from his iconic cranberry juice video, along with a shirt, hats, and beanies.