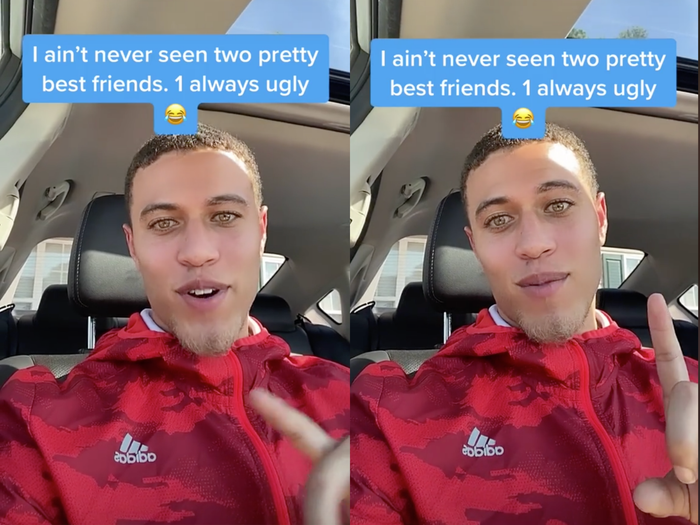 There's a single phrase haunting the hallowed halls of TikTok right now: "I ain't never seen two pretty best friends. It's always one of them gotta be ugly."

It's inescapable. Like other memes that have become instantly recognizable on the platform (see: Lin-Manuel Miranda's lip-biting selfies), the "two pretty best friends" tagline has turned into the perfect bait-and-switch, with people tagging it onto the ends of their videos, creating elaborate scenarios that use it as a punchline, or simply slipping it in anywhere else they can fit it.

The phrase itself was coined by TikTok creator Jordan Scott, AKA @jayrscottyy, in an October 8 video. The 24-year-old is sitting in his car. Looking straight into the camera, he says the now-iconic phrase, wagging his finger to emphasize the point.

"Why y'all never choose another equal to be y'all best friend?? I hate when the ugly one call the pretty 1 'twin' if ur best friend bad as u tag her rn," the caption on the video reads.

why y’all never choose another equal to be y’all best friend?? I hate when the ugly one call the pretty 1 “twin” if ur best friend bad as u tag her rn

A cursory glance at the comments seems to suggest that the meme has grown much, much bigger than the creator itself, with a recent surge in popularity. Replies left within the past five days make statements like, "POV: You finally found the original" or "SO YOU'RE THE REASON I HEAR THIS ALL THE TIME."

The video's success seems a bit random. When asked about why he thought people had latched on to this video specifically, Scott told Insider that he "really [didn't] know. That's a good question."

Scott, a model and senior at Coastal Carolina University studying physical education is known on TikTok for his short videos, usually filled with short one-liners about relationships. He says he is easily recognizable on the app for his piercing amber eyes and the fact that nearly all of his videos are filmed in his car.

He told Insider that much of his content draws on previous relationship experience. In videos, he sometimes calls women "females" and makes claims like, "Women swear they're broke. Then all of a sudden here comes the UPS/Amazon truck." In others, he dishes out quips like, "If that man is grabbing your booty and pretending it's big when it ain't? That man love you."

As Vox's Rebecca Jennings noted, it's all very "local Twitter," referencing the side of the platform that's likely to be comprised of people from your hometown that deals in "relatable" and at times cringey one-liners about life and relationships. Scott has built a persona from having a striking appearance — people on the app are obsessed with his eyes, and he tells Insider that "it's been a thing growing up all his life" — and by dishing out content focused on "life stuff" and "anything pertaining to everyone that can relate to everyone."

"I try to spread positivity and just give life tips and advice, just so that way if anybody's struggling out there that I'll know I'll be able to touch them with just my words if that's all it is," he told Insider.

Still, many of his videos, including his most viral, are preoccupied with women's behavior or seem to be addressing them directly in a way that can be read as sexist. One comment on Scott's "two pretty best friends" video, referencing his caption which encourages viewers to tag "her" if your "best friend bad as u," reads, "TAG HER? WHY KOT [sic] SAY TAG HIM? U GOT ISSUES WITH WOMEN U NEED TO CHECK THAT." Scott replied, "Dudes just hate on another doing better than them."

"Women interact a lot more on the platform, so I like to engage, that's my whole point of being on TikTok is to help people," he told Insider. "Guys aren't really… I mean, not saying that guys don't comment and stuff and tap in and want to learn more, but women, though, they actually listen. You know men are hardheaded, okay?"

Now, Scott has over 850,000 followers on the platform, and while it's been nearly a month since he first posted the video, the comments sections on his recent posts are haunted by it: emoji-laden quotations of "I ain't never seen two pretty best friends" fill the replies.

Scott told Insider that the "two pretty best friends" video came about after he had been talking to someone who he said had a friend who liked him as well.

Scott's video went viral on TikTok, blowing up as a meme in late October

While Scott's video was posted on October 8, comments on the original — as well as anecdotal evidence — suggest that it became popular on the app farther down the line as a meme. TikTok's For You Page doesn't necessarily serve up content to users in chronological order, so that's not particularly unusual.

As In The Know reported, many initial reactions showed people reacting to or parodying Scott's video.

Now, the video has become a bait-and-switch meme, with the goal being to squeeze it into any and every possible context. Lead-ins to the video are elaborate, with people creating fake emails (one appears to announce an expulsion from "The University of Hogwarts") or attempting to mirror other TikTok trends like screaming into a pot.

One subset of memes features a bait-and-switch in which creators start speaking in English about a specific phrase in a different language, leading up to them inevitably firing off "two pretty best friends" translated into another language.

These are some of the most profound words in the Chinese language. ##chinese ##asian ##learnchinese ##biligual ##twobestfriends ##fyp

You already know what it means ##fyp ##foryou ##fypシ

Now, though, the joke is woven into the fabric of TikTok culture itself: people don't need to say the iconic line for others to be in on the joke.

And as for Scott? As far as he's concerned, he's still on the lookout for a pair of pretty best friends. In his particular case, he tells Insider, "I don't have a best friend, but I am the pretty one."

'The Bachelorette': How Long Does New Fan-Favorite Ivan Hall Last on the Show?
Entertainment