Last fall, Steve Harkins was conducting a routine check on a shipment of records and CDs at Ingram Entertainment, a wholesale music distributor headquartered in Tennessee. Instead of vinyl, though, Harkins was amused to find that Ingram’s supplier had sent a pallet packed with bottles of windshield-wiper fluid. “I called customer service, they apologized profusely,” he recalls. “I said, ‘The thing that really bothers me is that you didn’t have the courtesy to throw in some car wax.’ ”

No harm done — until a few weeks later, when Harkins received another surprise that suggested a troubling trend. This time, a shipment that was supposed to contain music came filled with bottles of prescription cough syrup. Other orders of records and CDs arrived damaged or incorrectly packed. “You can’t make this stuff up,” Harkins says. “In all my years of business, I’ve never been able to report that we’ve been missing significant quantities of product, and in its place, prescription cough syrup and carwash fluid.”

Harkins isn’t alone. In January, a record store owner in Poughkeepsie, New York, got a similar shock. An unscheduled delivery truck pulled into the parking lot of Darkside Records. “The driver says, ‘I got a weird one for you,’ ” remembers Justin Johnson, who owns the store. Johnson went outside to find that an entire freight truck was being used to haul just four records — copies of a 50th-anniversary reissue of the Rolling Stones’ Let It Bleed, arriving two and a half months after their street date.

Vinyl Record Production in Peril After Fire at California Plant

Music Hit 1 Trillion Streams in 2019, But Growth Is Slowing

Another record store owner, Terry Currier of Music Millennium in Portland, Oregon, placed an order last year with Universal Music Group: approximately 700 items to ship on October 1st, giving them plenty of time to make it to the store before holiday shopping began. None of the albums showed up until after the Christmas rush.

Episodes like these — nonsensical, maddening, and business-threatening — have become commonplace for CD and record retailers over the past 10 months. Most agree that the inciting incident took place last April, when Warner Records moved its physical distribution to Direct Shot Distributing, a company that was already being used by the other two major labels, Universal Music Group and Sony Music Entertainment. A single company was suddenly responsible for sorting and shipping the vast majority of CDs and records sold in the U.S. market. Unfortunately, it seems that Direct Shot was incapable of taking on the additional work, according to interviews with more than 20 managers, retailers, and label executives. “The whole system collapsed,” says David Azzoni, a 15-year veteran of physical retail, illustrating the frailty of a distribution network that had long been taken for granted.

As a result, many labels, including the majors, are now struggling with what was once the most basic task in the music industry: getting their albums into stores for listeners who want to buy them. Affected titles include catalog classics as well as new releases (store owners interviewed for this story mentioned problems stocking 2019 albums from the Black Keys, Beck, and Cigarettes After Sex). With Record Store Day approaching in April, retailers are scared that they’ll be short of merchandise on the biggest day of the year for physical sales, while independent labels and artists, who are often more dependent on physical sales than the majors, are trying to cope with lost revenue and, in some cases, changing their rollout plans.

“It has affected us and almost everyone we know,” says an executive at an indie label that relies on Direct Shot. “Lost stock, unfilled orders, massive delays in fulfillment — it’s amazing how a company most have never heard of can bring the U.S. music industry to its knees.”

For many casual listeners, the convenience and rapid growth of streaming services has turned the physical side of the music business into an afterthought. But despite declining physical sales overall, CDs and vinyl still generated revenues of nearly a billion dollars in this country in 2019, according to Richard Burgess, CEO of the American Association of Independent Music (A2IM). 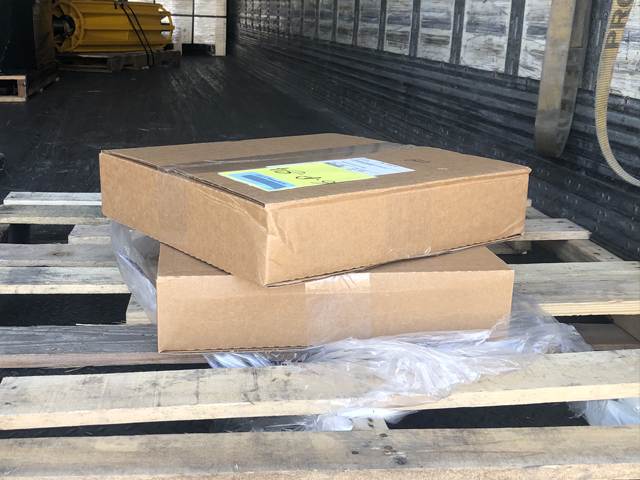 A whole freight truck was used to ship just four records, according to one record-store owner in Poughkeepsie, New York. Courtesy of Justin Johnson

That amounts to roughly one-tenth of the overall music industry in the U.S. — “not peanuts,” as Burgess puts it. And at many independent labels, the physical music business is worth far more: Vinyl and CD sales account for as much as 50 percent of revenue for some members of A2IM. Vinyl in particular has been growing steadily for years now, to the benefit of both major labels — who released many of the most popular records in 2019, according to the analytics company Alpha Data — and indies: “Physical releases are often a key part of their marketing plan,” Burgess says.

Thanks to decades of consolidation in the music business, once Warner moved to Direct Shot, the company became single-handedly responsible for more than 80 percent of the physical music on the market. That chunk includes releases put out by the three major labels — all declined to comment — along with those put out by the many independent labels that have been scooped up by major-label distribution networks over time.

“Direct Shot is obviously not prepared to handle the volume they took on,” says Andrea Paschal, executive director of the Coalition of Independent Music Stores. “It’s a one-inch pipe with 10 inches of water going through it,” adds Allen Kovac, CEO and founder of the independent label Better Noise Music, which left the Warner-owned Alternative Distribution Alliance (ADA) a couple of years ago.

Direct Shot did not respond to requests for comment. But Kyle Krug, director of marketing and communications for Legacy Supply Chain Services, a warehousing and logistics company which finalized its purchase of Direct Shot last summer, insists that the company has “brought lots of resources to bear” in an effort to retool Direct Shot’s distribution system.

Krug says Legacy Supply Chain Services’ efforts, which have already cost the company millions of dollars, encompass everything from “making sure a high-volume product is positioned in a spot where it’s easier to pick” to bringing in “high-end supply chain consultants” to installing a new “tier-one [warehouse] management system.” Was the Direct Shot warehouse unprepared to meet the demands of the modern music landscape? “That’s a fair statement,” Krug says.

But with Direct Shot still struggling to fulfill its mandate, many in retail doubt the efficacy of Legacy’s “reengineering.” Michael Kurtz, the co-founder of Record Store Day, believes that “any distribution company that was serious would have the problem fixed in 30 days — 60 days max, and that’s a huge stretch.”

“They’re not fixing it,” Kurtz adds, “and it’s not gonna be fixed.”

Unfortunately for the majors, since they all chose to rely on third-party distribution, they don’t have a lot of options at the moment. There are “not a whole lot of Direct Shots out there,” as Krug puts it. “They’re in kind of a niche business.”

Retailers say Universal temporarily moved some distribution to a separate facility to reduce the Direct Shot logjam. More recently, the three major labels stopped shipping music to small stores as a way of lightening Direct Shot’s load, according to retailers. (Some stores have succeeded in ordering directly from Sony in the last few weeks.) Stores were asked to rely instead on one-stops, basically middlemen distributors, but that led to price increases. The major labels attempted “to keep it as cost-neutral as possible,” according to two retailers, by having the one-stops offer discounts to stores that used to order directly from the majors.

Some in retail have seen an improvement in fulfillment rates and delivery times — though it’s not close to back to normal — while others have seen no change. “I’ve been fond of saying putting a bandaid on an amputation doesn’t really cut it,” jokes John Kunz, from Waterloo Records in Austin, Texas.

Kurtz conducted an informal survey of record store owners in his orbit. “The first four months of 2019, most record stores were up 20 percent over the year before, business-wise,” he says. “Between that time and the end of the year, we went to flat to negative four percent on the year.” Paschal is sure that “this situation will be the end for some stores.”

Aside from the retailers, the greatest pain is being felt by indie labels and middle-class artists who don’t have massive stream counts. “For working musicians, physical, selling records on the road, getting those records into stores, that’s still a big piece of their economy,” says Tom Grover Biery, who spent 20 years at Warner and became a prominent early advocate of Record Store Day during his time there.

An executive at an indie that goes through ADA says the chaos at Direct Shot has “cost us severe loss of business for almost nine months.” “We started to reschedule releases in the hopes that they would benefit if the situation got better,” he adds. Andy Farrow, who manages the metal band Opeth, says the delays in physical shipping also “impacted our chart position.”

A few indie labels, like XL and 4AD, have managed to extricate themselves from their distribution deals with major-label owned companies, working instead with the independently-owned Redeye Distribution. (A rep for the Beggars Group, which includes both those labels, declined to comment.) The indie label executive who is currently struggling with fallout from Direct Shot distribution says “we’re looking for alternatives.” Krug from Legacy Supply Chain Services calls this “a concerning trend.” 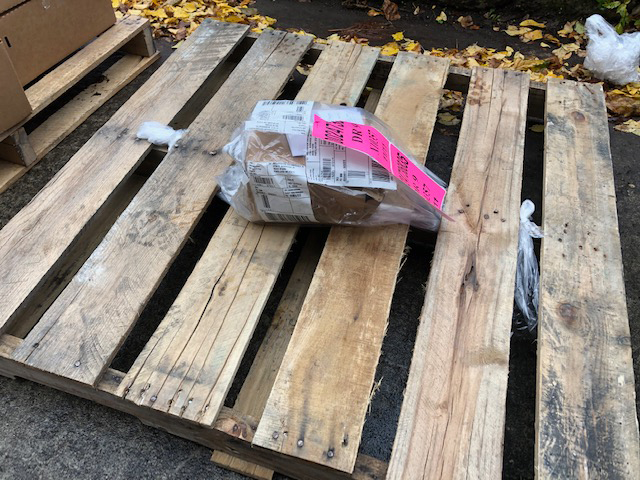 A pallet was delivered to Music Millenium in Portland, Oregon, with one box and one CD in it.
Courtesy of Terry Currier.

Many indie labels that have been affected by the distribution crisis are scared to speak about their experience. “People are afraid of talking about what really happened because there are people that will hold that against them,” says the executive at an indie label that goes through ADA. “Before indies try to get out of a deal, they’re worried about not getting out if there’s any negative publicity surrounding them,” Burgess explains. “When they get out, they wind up having to sign an N.D.A.” So the situation continues quietly.

As the indie community’s concerns have gone unaddressed month after month, wounds have started to fester, and a conspiracy theory that the major labels are actively trying to eliminate the physical business has gained momentum. “We know the demand is here,” says Johnson, the Poughkeepsie store owner, “but are they gonna kill off the business?”

Krug has heard this theory, and he calls it “an unfortunate assumption.” “We absolutely recognize the pain that those folks are having,” he continues. “We’re all investing in this business to ensure that the physical music industry maintains itself.” As to when Direct Shot will be running smoothly again, he says “we’re trying not to float specific dates out there,” though “we’ve got a lot of big [changes] that are coming to the end point.”

Mike Fratt, general manager of Homer’s Music in Omaha, Nebraska, is also aware of the theory that the majors are trying to wash their hands of CDs and vinyl by choking off the supply. But he offers a different explanation. “I don’t think anybody malevolently tried to hurt us,” he says. “It was greed, poor management decisions, and incompetence that brought this about.”