The following contains spoilers for The Amazing Race‘s Season 34 finale.

As Claire mentioned in Wednesday’s season finale of The Amazing Race, it was, indeed, the only leg that mattered.

When it came time to race around Tennessee, rappel off a monstrous bridge and tackle a memory challenge straight out of the movie Big, former Big Brother houseguests Derek and Claire reached the Pit Stop first, winning the $1 million and becoming the official champions of Season 34. (Read a full finale recap here.)

Below, the newly crowned winners talk to TVLine about how they prepared for the race, the hardest part of their journey and which of their former houseguests would excel in this oh-so-amazing Race.

TVLINE | How would you compare your experience on The Amazing Race to your time spent in the Big Brother house. Which was harder?
DEREK XIAO | I might have a little bias because one of these shows we won, so I think the show we didn’t win was a little bit harder. [Laughs] Big Brother can sometimes come down to luck. Especially as you start getting towards the end. Even when you’re sitting in the final seats, you don’t really know how the jury views you. When I watch Big Brother or Survivor, I think the jury is going to vote for one person, and they end up voting for someone else. So I feel like Big Brother, at different points, can come down to luck. Amazing Race, at every point of it, feels like it’s in your hands pretty much.
CLAIRE REHFUSS | It’s like comparing apples and oranges, almost. The Amazing Race is so in your hands, and of course, we felt that especially because of the COVID protocols. It’s all self driving. It’s not like you’re getting a bad cabbie. Any mistake you make is really your mistake. On Big Brother, sometimes things are out of your control! Both of them are hard, but they’re hard in very different ways. Big Brother is more random, a little [more] chance [involved]. You can play a great game and still go out early, whereas on The Amazing Race, if you run a clean race, you won’t go home. 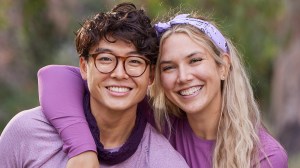 TVLINE | What did you do to prepare for the Race?
DEREK | A lot of things! Luis and Michelle were probably prepped the most. They were preparing every single night. Claire and I, for three weeks before the race started, did a little boot camp with her family. We were staying with Claire’s mom and dad in Virginia Beach, and they taught us how to drive stick shift. They would put us in the back of their pickup truck, blindfolded, and drop us off in the middle of nowhere.
CLAIRE | With a paper map, and be like, “Figure it out. Get back!”
DEREK | We were doing daily runs, practicing languages, dancing and singing, surprisingly. We were running the whole gamut for weeks. Watching as much Race as we could.
CLAIRE | We had all the [country] flags down. We rewatched so many old seasons and took copious notes like, “Why do teams go out? Why do teams do well? How can we do that?” We listened to past racers’ podcasts, any tips we could get, really. The one thing my mom really wanted us to do was practice with tools. She was like, “Why don’t you go flip over all of the wood on the back dock.” And we were like, “Nah, I think we’ll be fine. I don’t think we need to know tools.” And of course, I run into two building challenges where I’m like, “My mom and dad are so mad that we didn’t prep for this! What were we thinking?” [Laughs]

TVLINE | I’m guessing another thing you didn’t prepare for, Claire, was yodeling! Was that the hardest part of this race for you or did something else suck even more than that?
CLAIRE | OK, well I’ve come to find out my great grandma was a professional yodeler, so I have yodeling in my blood! My grandma was like, “I don’t know what happened to those genes!”
DEREK | They were recessive…
CLAIRE | They did not get through! That was definitely hard, but the Ducati factory may have been worse. Yodeling was rough, because I just saw all of the teams come and all of the teams go. I was like, “Oh, no, this is going to cost us.”
DEREK | No, I saw all the teams come and go! Yodeling may not have been the hardest challenge for Claire, but it was the hardest challenge for me to watch.
CLAIRE | That’s probably fair. The tasks themselves are hard, but it’s the strain it takes on you mentally to think, “I’m not capable. I can’t yodel! What else won’t I be able to do?” It’s very scary on the Race. They can throw anything at you! I might have to square dance next. Who knows what’ll happen? A negative mindset can be very detrimental.

TVLINE | Derek, what was the hardest part for you?
DEREK | I think the hardest part other than trying to drive a manual car uphill probably had to be the navigation. I wish I could’ve been doing it. I was like, “How am I going to navigate without a map? I can’t see it!” But generally, as a collective, navigating in our type of race where we were doing the private charter and a lot of self driving, I think navigation will basically win you the race, and if not, almost guarantee to get you to Top 6. From there, it’s on you to be able to do the challenges. 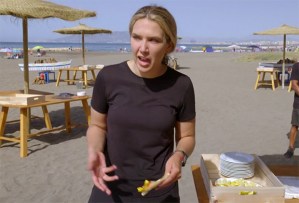 TVLINE | Did you ever regret or second-guess helping Aubrey and David with that fish-cooking challenge? It seemed to work out in your favor, but viewers seemed surprised that you’d help a team so late in the game.
DEREK | No. When I did it, I guess it was second nature almost. They were just people that I liked. I was like, “Did you remember to salt your fish?” because it didn’t look right. They were like, “Oh my god, we didn’t do that!” Claire and I were already leaving the challenge. We weren’t going to get beaten by them. We were steadily in first, so we were OK. I just did it out of wanting to help them. It ended up paying off as a good strategy because they helped us a lot later in the leg. The moral of the story is good deeds pay back. Good karma… it’ll all pay off.

TVLINE | How hard was that keyboard challenge, and was it the toughest part of the final leg?
CLAIRE | Yeah, I would say for sure. There was a lot of running, let’s get that clear, but the memory task itself was hard, especially once all the teams got there. Having watched the Race and knowing anyone could leave at any point… Once we figured out, “OK, here are all the places. Now let’s put them in order,” both of us had to play it in order to get it under the time. You couldn’t really communicate as you were going, you didn’t have time. That was definitely the hardest part of the finale.
DEREK | Easily. It was the hardest thing we did all race. Trying to hold yourself together when you know this is the last challenge standing between you and the million dollars. You’re watching every team do it at the same time, and you know whoever gets it first is going to win a million dollars. That was the most stressed I felt probably the entire race.

TVLINE | Let’s pivot a bit. Which one of your former Big Brother houseguests do you think would thrive on the Race and why?
DEREK | Kyland, for sure. No doubt about it. Last night we were at a finale party and after the results came out, Kyland came over and gave me a hug, and in one motion just picked up both of my legs and put me on his shoulder. Like by the ankle! I was standing on his shoulder, but I felt like I was on solid ground. I was like, “Holy s–t! This dude could pick up a truck if he wanted to!” The physical aspects would be no problem for him, he’s an extremely smart guy… he’d absolutely kill it on the Race.

TVLINE | And let’s flip it. Which one of your Amazing Race cast members should go into the Big Brother house?
CLAIRE | I could see Rex [Ryan] really killing it in there.
DEREK | If no one knows who he is… [Ryan is a former head coach for the New York Jets and the Buffalo Bills.]
CLAIRE | Yeah. He’s just one of the funniest people I’ve ever met in my entire life. He has stories for days. No one would ever get bored of him in that house.