Venice 2019: Director Shannon Murphy’s got style to burn, but an excess of it undercuts her characters and their dilemmas 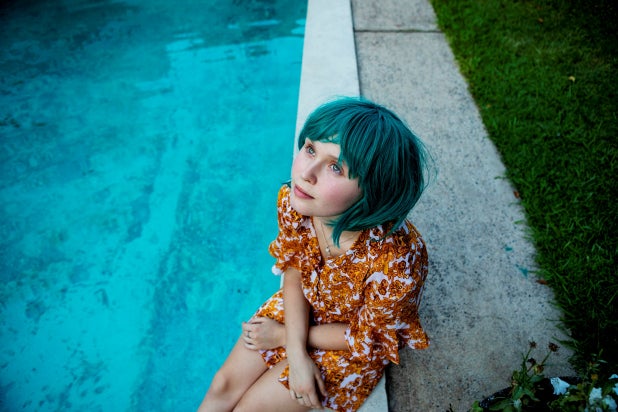 “Babyteeth,” to put it lightly, has a lot going on. With her feature debut, Australian theatre-television director Shannon Murphy swings for the fences, whipping up a candy-colored dramedy that toggles between tear-jerky terminal illness melodrama, Y.A.-friendly opposites-attract love story, and tongue-in-cheek appraisal of middle-aged malaise — all while giving the various strands the same quirky coat of paint.

Does it all work? Not quite, but you can’t fault a film for its ambition, least of all one that does manage to bring it all together for a deeply moving home stretch.

Like its bewigged main character, “Babyteeth” tries on a number of looks over its two-hour runtime. Some fit better than others, and if the film eventually settles on that which works best, it takes some time to get there.

Of course, time is the one luxury that the comfortably middle-class Milla (Eliza Scanlen, “Sharp Objects”) does not have. A doe-eyed 15-year-old issue of some affluent Aussie ‘burb, Milla enters the film already well into a losing battle with an aggressive form of cancer.

We meet her on a train platform, already defeated. She lets her friends get on ahead of her, watches as the doors close and her friends speed off — heading to some destination she cannot reach — and keeps on inching closer and dangerously closer to the track.

And then Moses (Toby Wallace) whooshes into her life. A rat-tailed, face-tatted junkie-dealer (or is it the other way around?), Moses rushes even further to the edge and closer to the incoming train, if only because he sees no other way than to live each moment to the extreme. His brazenness shocks Milla from her march, and his live-wire charm offers the resigned young woman a new spark of life. She takes a liking to him and then takes him home.

Her parents Henry and Anna wait at the stead. Mom (Essie Davis, “The Babadook”) is a one-time concert pianist who now spends her days in a prescription drug induced stupor; Dad (Ben Mendelsohn, also appearing in “The King” at Venice along with just about everything everywhere these days) is the emotionally aloof psychiatrist writing the prescriptions. Both are living out midlife doldrums fueled, if not wholly caused, by their daughter’s illness.

The biting irony of “Babyteeth” comes to a head in one early scene that finds our four leads seated at the dinner table. Homeless, drugged-up and nearly a decade older than Milla, Moses is almost a caricature of every parent’s worst nightmare. And he no doubt would be, if only Henry and Anna weren’t living a nightmare of a much greater scale (and with more irremediable effects) than a crappy first boyfriend. Even if he’s only there to raid Henry’s drug cabinet, Moses is the only thing that makes Milla happy. The kid stays in the picture.

See Photos: 10 Films Directed by Women to Check Out This Fall, From 'Frozen 2' to 'Little Women'

Adapted by screenwriter Rita Kalnejais from her play of the same name, “Babyteeth” builds upon a rich script that hands out provocative questions like Halloween candies: Should Milla be allowed to spin out at such a young age, knowing she’ll have no chance to do so in the future? What is the moral way forward here, and does it in any way include making one’s daughter a pseudo-john while enabling an addict? Does morality even come into the question in the face of a child with cancer?

Still, director Murphy doesn’t always seize the opportunities the script affords her. If anything, she expends real effort defanging some of those thornier questions by lathering the goings-on with kooky-quirky gloss, opting for the same mannered compositions and eccentric line readings that made “Napoleon Dynamite” and “Juno” such indie darlings a decade ago. And honestly, those prickly thematic concerns could work perfectly well in concert with a more effervescent visual style, if only the film would simply commit.

Instead, it cycles through different alienation techniques like constant, self-referential chapter titles, fourth-wall-breaks and various stylistic swings. Some winks are witty enough in the moment, and from a technical point of view, the film looks and sounds great. But it all culminates at a point, around halfway through the film, where you turn to yourself and wonder why this carefully made film leaves no emotional impact at all.

The answer arrives shortly thereafter, once Murphy does away with so much frustrating affect and allows the narrative to reach a much more natural, and naturally moving, end. “Babyteeth” might befuddle at first, but by the time it reaches its simple beachfront conclusion, you could see the waves crashing onscreen reflected in many audience members’ tears.