“Black Adam” (Warner Bros. Discovery) lingered under the suspicion that — like a number of high-budgeted, highly touted DC Comics films that came before — it might prove disappointing. That’s the curse of Marvel comparisons, which produces films that often open over $100 million.

Instead, the Dwayne Johnson vehicle opened to $67 million domestic start, the best initial gross for any film since Marvel’s “Thor: Love and Thunder” in July. “Thor” was a much bigger opening ($144 million), and “Black Adam” failed to reach the $75 million that theaters that desperately need it, but by October standards this is a very satisfactory start.

Meantime, original rom-com “Ticket to Paradise” (Universal) had much lower expectations. It took in $16.3 million, about a third better than projected. Credit the star power of Julia Roberts and George Clooney, similar to the benefit Johnson gave “Adam.”

Last October was considered a rebound month for theaters, with multiple new releases including “No Time to Die,” “Halloween Kills,” and “Dune.” By some margin, “Adam” was better than all of these, trailing only (once again) a Marvel title with “Venom: Let There Be Carnage,” which opened to $90 million.

Without adjusting for inflation (which currently stands 20 percent above 2019 alone), this is Johnson’s biggest opening as a leading man. (Some of his “Fast and Furious” titles opened higher). He has been a reliable draw for years in mid-level budget action films, and that clearly carried over here.

Even with its middling B+ Cinemascore, this DC entry hasn’t seen much social media backlash. Rotten Tomatoes audience scores are not scientific, but the film stands at over 90 percent approval — the best for a DC title in years. The Saturday gross also reflects that positive response; it dropped only 11 percent from the initial two-day gross (and was better than Friday alone). On balance, that’s better than “Aquaman;” it opened to $68 million in 2018, but dropped 23 percent by day two.

The big concern here is the reported budget. “Adam” is reported to have cost up to $200 million before hefty marketing costs. Initial international results are $73 million, but it will need to do much better (as action titles normally do) as well as hold in domestic dates to be a clear success. For theaters it’s a nice boost, but again — and, unfair to this particular title — theaters need films that overperform. 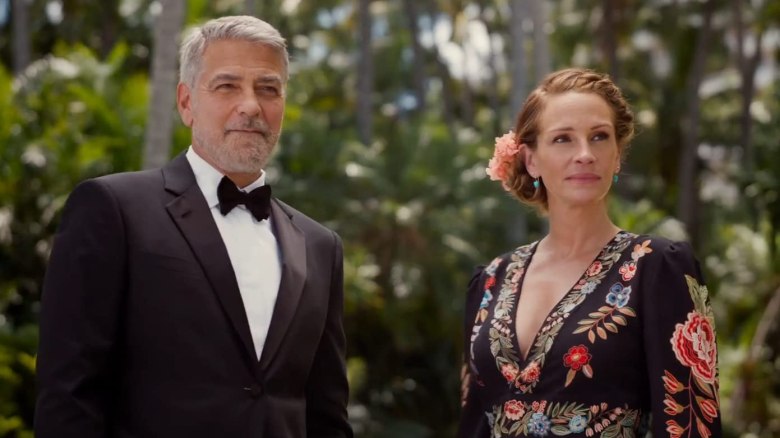 “Ticket” is reported to have a $50 million pre-marketing price tag. It has already taken in $80 million foreign, with more to come. Its A- Cinemascore and tiny 5 percent Saturday drop suggests a decent hold ahead. More importantly, it drew an older audience (64 percent over 35) that often doesn’t rush to theaters, despite mediocre reviews (a 50 Metacritic score).

The results from these two films propelled the weekend to around $116 million. That’s the first $100 million+ weekend since late July. The same period in 2021 had four of these; in 2019, there were 10. It’s a positive story, even if it reflects how business has been for more than three months.

The total was 84 percent of the gross three years ago, and better than last year (recent weeks lagged behind 2021). The four-week rolling comparison to 2019 (remember that tickets now are 20 percent higher) jumps to 61 percent, the best since early August.

Last week’s #1 “Halloween Ends” (Universal) dropped a near-record 80 percent its second weekend. Its $8 million total left it at #4, behind the much better-received “Smile” (Paramount). That original horror film placed third, down 34 percent and now at $84 million.

New titles otherwise sapped holdovers. Sony’s animated “Lyle, Lyle, Crocodile” is weaker than most cartoon titles of note, placing fifth but down 43 percent in its third weekend and not quite at $28 million. “Amsterdam” (Disney) fell another 70 percent; its ultimate domestic take will likely be under $15 million.

Two more limited titles made the top 10 this weekend. The micro-budget “Terrifier 2” (Cinedigm/Iconic) added 55 theaters (now 755), but credit strong word of mouth for boosting its gross 84 percent to $1.9 million. It is perfectly positioned to benefit more from pre-Halloween interest next weekend.

“Triangle of Sadness” (Neon) became the first of the fall specialized releases to make the top 10, with a jump to 280 theaters taking in a decent $600,000. That’s ahead of “TÁR” (Focus), which is in half as many theaters and has a higher per-theater average. More on these titles, as well as a strong opening for Searchlight’s “The Banshees of Inisherin” ($191,000 in four theaters), a strong second weekend for “Decision to Leave” (MUBI), and more in our separate specialized report.