Carrie Bickmore is camped in a car parked outside her home, trying to steal a few moments of peace.

"If I go into my house, I have three children on school holidays and it's quite noisy. So for media, I'm staying put in the car," she jokes. "I don't know how people work from home, I honestly get absolutely nothing done." 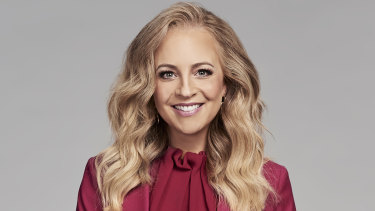 Carrie Bickmore returns to The Project on Monday.

The 38-year-old will return to 10's The Project on Monday, seven months after the birth of daughter Adelaide, her third child and second with partner Chris Walker. Like any parent, she's anxious about her workplace comeback.

"A lot of people told me going from two to three kids would be easy, but it's been so incredibly tricky," says Bickmore. "There's just no time left over to think about anything. There's a lot to do, a lot of noise, and just a lot of life.

"I'm looking forward to getting a coffee and being able to drink it before it gets cold, and for the silence of a 20-minute ride into work. But I'll be really honest, I have huge mixed emotions about it."

Despite the challenges of being a working mother of three, Bickmore says her own insecurities are likely to help her overcome the juggling act her life is about to become. 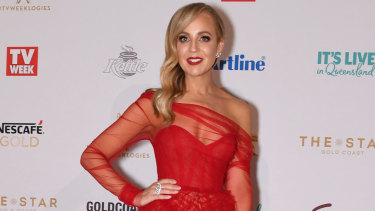 Bickmore at the 2019 Logie Awards.Credit:AAP

"From when I was a little girl I've had huge amounts of self-doubt," she says. "But I think that also means I'm someone who's propelled to do more and that will always be the case. I'm someone who always needs to be better than I am now."

Even without her daily on-air duties, Bickmore's spell away proved professionally rewarding. In June, she received an Order of Australia medal for her service to broadcast media and her charity Beanies 4 Brain Cancer, which has raised $11.5 million for brain cancer awareness to date. The highlight of her break, however, was something simpler.

"Spending time with the kids after school was such a unique thing for me the last eight months, because I don't get that. Just being able to have dinner with my family has been incredible. I haven't had that for 10 years, you know?" she says.

"My children are all really varying ages: I have a son who's about to start high school [Ollie], a four-year-old [Evie] and a six-month-old baby, so their needs are very different. I think it's going to be a massive adjustment for me heading back to work. I'll have a little pain in my tummy, but that's the reality of working when you're a parent… I don't know if you ever feel quite content."

A surprise on-stage reunion with her co-hosts at last week's Logies has eased the transition and stoked her anticipation, says Bickmore. The Project, up against headline-makers like ABC's Four Corners and Nine's 60 Minutes, claimed the trophy for Most Popular Panel or Current Affairs Program. In her acceptance speech, Bickmore spoke of the anxiety that greeted the show's "terrible" beginnings a decade ago.

"Oh yeah, I was very unprepared for what that whole experience of launching a new TV show would be," she elaborates. "I haven't watched the first episode and I don't think I'll ever be brave enough to watch it. I know it couldn't have been good. We were flying by the seat of our pants, just holding on for dear life."

As the show celebrates its 10th anniversary this month, those butterflies remain ever-present, says Bickmore.

"I'm never blasé about this job. Every night when the camera light goes on I pinch myself, like wow, I get to do this again. But I don't think I'll ever feel 100 per cent confident in my abilities or completely sure of myself; I've just never been wired that way," she says.

Bickmore returns to The Project on Monday night at 7pm.