Recently Avery Trufelman uncovered some mini-cassettes she had forgotten existed. That’s understandable, because she recorded them when she was nine-years-old and she is now 28. She found her old tape recorder, put one of the cassettes in and pressed play.

“And it’s from a vacation my family took to Florida,” says Trufelman, sitting cross-legged on a chair in a Sydney hotel room while in town for the Audiocraft Podcast Festival. “I ask my sister ‘So how does Florida make you feel?’ She was six! She says ‘I don’t know. It’s kind of hot.’ I keep asking her questions and at the end I say ‘This is Avery the reporter.’ So I guess what I’m doing now goes back to that.” 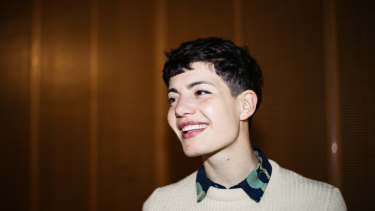 What Trufelman is doing now is, to put it mildly, a lot. She’s one of the busiest podcasters in the business. Since 2013 she has worked as a producer and presenter on 99% Invisible, which examines the unnoticed architecture and design that shape our world. Created by Roman Mars in his bedroom, it got the largest Kickstarter funding of any podcast in history and is now one of the most critically acclaimed shows in the world.

Last year Trufelman created her own 99% Invisible spin-off mini-series Articles Of Interest, about the historical and sociological impact of clothing.

The inspiration for the show goes back to when she was 16 and saw a retrospective on the work of designer Vivienne Westwood at the DeYoung Museum in San Francisco.

“I’d never heard of Vivienne Westwood,” she says. “Discovering that she invented and designed the look of punk just blew my mind. The whole point of Articles Of Interest was to get to that story.”

The six-episode series delves into many hidden corners of the world of clothing – the fascinating history of the Hawaiian shirt; how much water is used in the creation of a pair of blue jeans; why so much women’s clothing doesn’t have pockets.

Trufelman’s fascination with fashion is at odds with her attire during the making of the show. She says she spent every day in a work uniform of a blue collared shirt and black overalls. She prides herself on never having to check a bag for any flight. She travelled to Australia with just a backpack.

When she moved from New York to San Francisco to take up an internship at 99% Invisible, she took one duffel bag, unsure of whether a job would eventuate. That was six years ago.

When you look at her background, it seems obvious that creating audio stories would be in her future. Both her parents worked in public radio.

“My mum primarily worked at the classical station and recorded live shows, both music performances and shows where actors read short stories. She was a hot-shot, head of her department at 26.

“My dad worked in public relations at WNYC and then when I was born they moved from Brooklyn to the suburbs and he started his own media public relations company. He still gives me advice on strategy. Having his perspective has helped me a lot. My parents always told us radio was a job we could do, but who could have predicted podcasting?”

And who could have predicted how many podcasts she would do at once? This year Trufelman has started yet another series after being approached by Curbed/Vox Media to launch the first season of Try This!, about how humankind has tried to create utopian communities. On the show she covers everything from French architect and designer Le Corbusier’s work on Chandigarh in India, to Levittown, the planned communities of US suburbia in the ’40s and ’50s that were limited to Caucasians.

Trufelman has been in podcasting for long enough to see it shift from what she calls “the punk years”, but she’s adamant the DIY ethic still rules if your ideas and stories are strong enough.

“All these gear-heads say you need this or that fancy microphone and a $5000 recorder, but I always prided myself on being scrappy, using my old Zoom mike and GarageBand,” she says. “Last year my producer finally said ‘Avery will you buy a better recorder?’ So I did. But it doesn’t have to be expensive. You just have to know how to record with it properly.

Barry Divola travelled to Audiocraft Podcast Festival as a guest of Destination NSW.