Warning: This post contains spoilers from the Season 5 finale of Cobra Kai.

It’s been a long two seasons with Terry Silver back in the Cobra Kai mix, but the madman’s threat to society has finally come to an end.

In the karate drama’s Season 5 finale, a drunken Johnny, Mike and Chozen take the fight to Silver’s doorstep, but their trespassing does not go well for them. With a little help from Stingray — and the kids, who break into the Cobra Kai flagship to download incriminating evidence from the dojo’s server — Daniel finally takes on the man with the silver pony in a mano-a-mano round of fisticuffs. Daniel-san ultimately wins the war, which culminates in a triumphant, sky-high crane kick that knocks Silver right on his you-know-what.

Although it wasn’t the first time Karate Kid star Ralph Macchio had revisited it since the original movies, he figured the iconic kick was “probably coming” back in the series. (Hear what Macchio had to say about it in the video embedded above). As for the show’s co-creators and executive producers Josh Heald, Jon Hurwitz and Hayden Schlossberg, they knew the move would eventually be used at an opportune moment, and treated the franchise’s throwback technique with the respect it deserved.

“We hold the crane kick to the highest regard,” says Heald. “It’s the end of The Karate Kid. It’s a direct teaching from Mr. Miyagi that Daniel took upon himself to learn and train.”

Daniel attempted (and failed) to revive the finishing move in The Karate Kid Part II in a fight against Chozen, and Silver ultimately mocked it in Part III by referring to it as “that crane crap.” (How’s that for poetic justice?) Miguel also gave it a go in Season 1 of the series “just to rub it in Daniel’s face,” the EP adds. 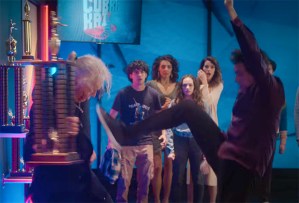 “It’s been a move that’s been around, but Daniel hasn’t really leaned into it for any of his fights on the series until now,” Heald continues. “As we were putting together this final clash, what better move to destroy Silver’s Cobra Kai in this very incendiary moment than to lean into Daniel’s earliest teachings? It was so amazing to witness live on set standing by the camera, watching Ralph really move his whole body and whole leg into it, and get it up that high. He knows what an iconic moment that represents. You want it to be perfect, and we’re so happy with how it worked out.”

Says Macchio with a smile: “I’m excited to see and hear how the fans all respond to it.”

Below, Heald, Hurwitz and Schlossberg share their thoughts on the rest of the action-packed finale, including that inkling of hope for Sam and Tory and John Kreese’s outrageous prison break.

TVLINE | This was such a meaty finale with such ambitious fighting sequences. How long did it take to film this one, and did the cast have to do any additional training beyond the norm?
HAYDEN SCHLOSSBERG | All of our season finales are jam-packed and very long. We cram as much as we can into a “half-hour show,” particularly our season finales. We write these finales and try to keep it at 40 pages, which could be 40 minutes, but we know that when working these scenes that there’s going to be different things we want to explore, so it ends up being 45 pages, and then close to 50.

It’s difficult to shoot these things because everybody this season has a fight sequence and there’s multiple fights. We prep as much as we can, and it’s a lot of mental prep because we don’t have as much time as when Ralph did the original Karate Kid. They had weeks to prepare for those fights. On Cobra Kai, we’re prepping basically the day before. The stunt coordinators are figuring things out beforehand, but our actors are working on fights every episode, so there’s not a lot of time to practice these final fights until right before. It’s really a massive effort on everyone’s part: us, the stunt coordinators, the fight coordinators, all of the actors. We all have to take it really seriously and milk every moment that we have to make these fights great. We have a bunch of them in that last episode. It is our biggest episode and there’s more to come. Every season is a new challenge, but we like taking it on. 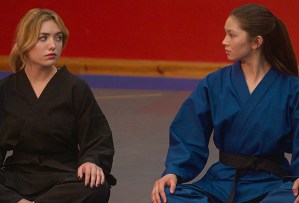 TVLINE | Tory teamed up with the good guys to help take Silver down. What challenges lie ahead for her in terms of leaving Cobra Kai for good and re-integrating herself with Miyagi-Do?
HURWITZ | One of the fun things about the end of Season 5 is that these characters can go in a wide array of directions. Terry Silver’s Cobra Kai has been exposed for what it is, and all of the students are left in the wind. For Tory, it’s a huge load off. She has a very challenging season emotionally with what she’s going through, being in the belly of the beast this entire time and being seemingly free of it by the end of the season. She’s starting to build relationships, reconnecting with Robby and being in a much more positive place with Sam. We don’t know exactly where their future lies, but at least for now they’re able to put aside their issues for the greater good, and the door is open for these kids to potentially deal with their issues while they’re young instead of letting them fester for many years to come like Johnny and Daniel did.

TVLINE | I’d be remiss if I didn’t ask about that wild Kreese fake-out. Now that he’s sprung from jail, what’s the plan for him going forward?
HEALD | One of the best character attributes about John Kreese is that he’s faked his death before! [Laughs] It was a really fun Easter egg for that character to lean into and go as full bore as we did with that fake-out. It’s such a moment that we find him in after Johnny and Daniel leave him there to rot that it causes him to look inward and find that inner cobra to figure out his way out of there with every relationship he’s made in prison. Obviously, we can see he’s ready to get that “no mercy” spirit back and he clearly has scores to settle. We’ll just have to wait to see what’s in store for him.

Now it’s your turn! Grade the finale and season below, then drop some comments!