Geoff (played by Ian Bartholomew) has been controlling every aspect of Yasmeen’s (Shelley King) life since the pair first got together last year on Coronation Street. The villain has been emotionally abusing his wife, but in recent weeks, his behaviour has become a lot more aggressive. As his true colours threatened to bubble over in tonight’s double bill of the ITV soap, viewers couldn’t bare seeing the pensioner going through such an ordeal and had to “switch off”.

After agreeing to stand in as her husband’s assistant for a children’s party, despite having crippling claustrophobia, her dress came stuck in the box she had been locked in as part of the act.

The residents of Weatherfield were in stitches as Geoff tried to save his reputation, but it wasn’t long before the clip of his efforts went viral online.

It was clear from the off set the villain was fuming with his wife and when they got home, he launched a vicious attack on her.

With the harrowing scenes portraying the reality of coercive control and domestic abuse, viewers were left greatly “uncomfortable” and resorted to turning off. 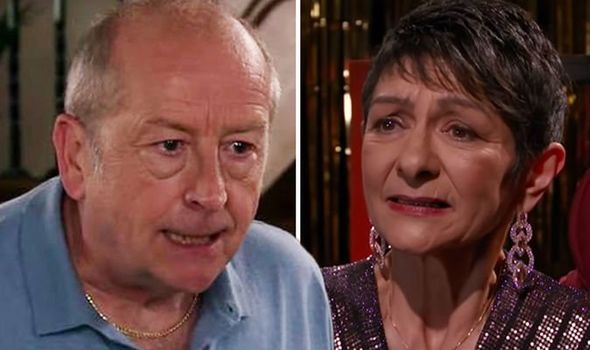 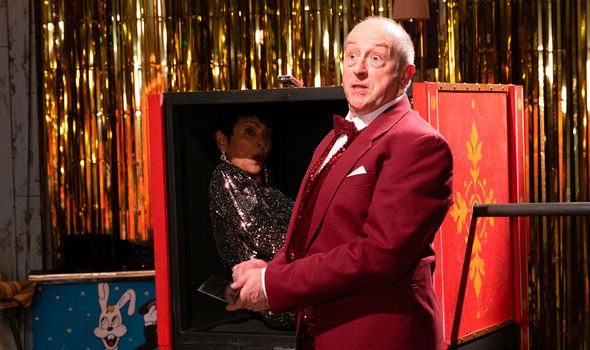 Taking to Twitter in light of Yasmeen’s abuse ordeal becoming even worse, fans of the show voiced how they could no longer watch.

One wrote: “I’ve actually just had to turn #Corrie off. I cannot physically watch Geoff abuse Yasmeen like that. Honestly, if anyone is in a relationship like that please get out NOW.”

Another added: “I can’t watch anymore of @itvcorrie I’m dreading what Geoff is going to do to Yasmeen. #Corrie #geoff.”

Whilst a third commented: “Not sure I can watch #Corrie anymore! I know this kind of thing does happen in real life, but Geoff is bloody unbearable! Poor yasmeen [sic].” 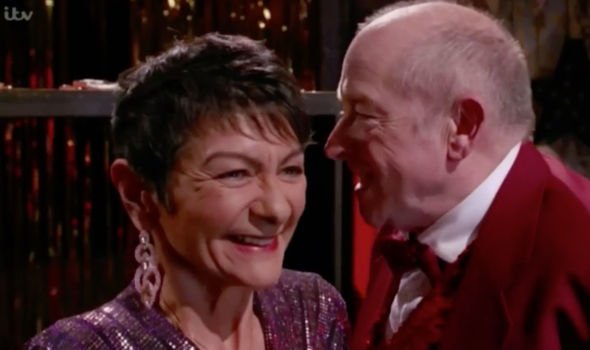 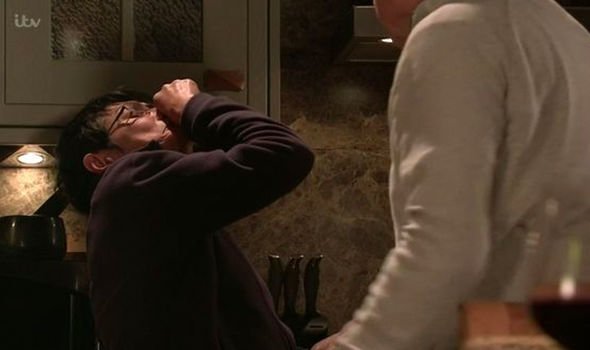 Not sure I can watch

A fourth simply posted: “I can’t watch… #Corrie,” to which a fifth remarked: “Omg Geoff is so vile to poor Yasmeen. I don’t know how much longer I can watch this. #corrie #@itvcorrie.”

The coercive control storyline was first announced last year when it became clear Geoff wasn’t the Mr Nice Guy he was portraying himself to be.

Working in conjunction with Women’s Aid and Independent Choices Greater Manchester, the soap is hoping to raise awareness of such a harrowing subject.

Executive Producer Iain MacLeod said: “Many thousands of people feel trapped in relationships with someone who claims to love them but who is actually taking them apart piece by piece, isolating them from friends and family and locking them in an invisible prison of fear and insecurity.”

“Often, the abusive behaviours accumulate and intensify over time so that you don’t realise it’s happening — it’s an insidious type of brainwashing.

“I hope this story will help anyone going through similar experiences in the real world by highlighting that feeling undermined, belittled, controlled or intimidated by your partner is never okay.

“The old ‘sticks and stones’ adage is just plain wrong — words can be instruments of torture and manipulation.”

Although may felt uncomfortable by the scenes, others praised the work of actors Ian, 65, and Shelley, 64, for making the scenes so believable.

Another added: “This such a hard storyline to watch. The acting throughout has been brilliant form all involved. It’s making me hate Geoff so much and wanting to give Yasmeen a hug. #Corrie.

Upcoming scenes will see Geoff take greater revenge on his wife as he ends up locking her in the box and walking out the house.

However, what he doesn’t expect is his son Tim Metcalfe (Joe Duttine) to free Yasmeen before he has chance to get back to the house. Will he be exposed?

If you or anyone you know has been affected by Yasmeen’s storyline, please find more information by visiting the Women’s Aid or call Refuge on 0808 2000 247.