Talking exclusively to the Daily Express, Katie McGlynn, the actress who played Sinead so movingly, recalls the impact that her character’s devastating demise had on the Corrie faithful. “To have people message me and say, ‘I went to have a smear test because of what I saw happening to Sinead on Coronation Street’, was just amazing,” she recalls. “I had nurses calling, saying there had been an uptick in cervical cancer screening after the storyline went out. They said it had really made a difference.

“Soaps are brilliant at raising issues like that. It’s such an important platform.”

The 27-year-old, who won the National Television Award for best serial drama performance for her work as Sinead, continues: “I wanted to show people they should go for a smear test, but I wasn’t expecting the massive reaction and uproar we got. It was phenomenal. I was super proud.”

Speaking from her home in Manchester, the down-to-earth actress, returning to our screens in the latest series of Kay Mellor’s lottery drama The Syndicate, is the very opposite of a show-off, “look at me” diva.

“I have a bit of impostor syndrome,” she admits. “I feel like I really don’t know what I’m doing. Sometimes I think, ‘How the heck have I done what I’ve done? Where did that even come from?’”

What is most likeable about the actress is that she is not tempted by those two seductive F words: fame and fortune. 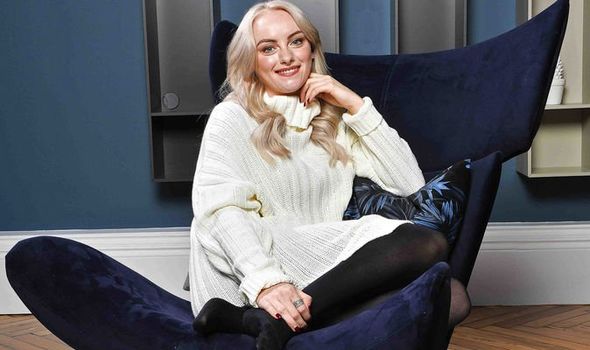 Katie muses: “I just love playing different characters – that’s what I’m about. I’m not in this for money or fame. I’ve never been motivated by that. As long as I get to play different people, I’ll get by.

“Having that mindset has made me happier. If I was constantly striving for money and fame, it would be an uphill battle, soul destroying. Fair play, if that’s what you want to do, but I don’t.”

So, we won’t be seeing Katie as an Instagram influencer any time soon?

“No! That is not something I would enjoy. I’d feel very awkward. Also, it looks like too much effort!”

Katie is much more interested in creating characters that strike a chord with viewers, such as Sinead, who she played for seven years. “Because it was Corrie, which a lot of people tune into, which is in their living rooms day-to-day, it felt closer to people’s hearts.

“If it was in a movie, say, it would not have been so relatable. But because it was in Corrie, where people think they know the characters as they see them every week, it hit home more.” 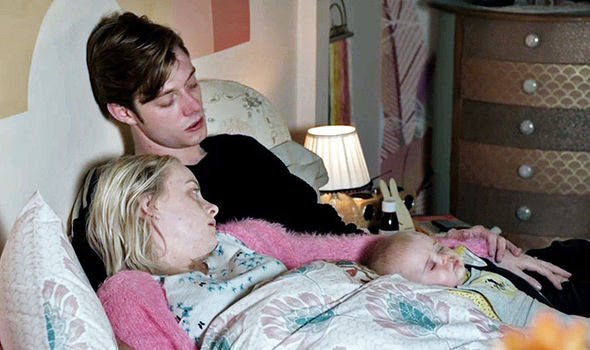 She adds: “Because Sinead was so young, it shocked a lot of people. But that just showed that it can happen to anyone. She got rid of the cancer once, but unfortunately it came back, which does happen. Cancer is still very much an issue. It’s literally destroying people’s lives, and it’s not going away.”

Sinead left behind her husband Daniel (Rob Mallard) and new baby Bertie and working on such a tragic story inevitably took its toll on Katie.

Looking back now, she admits: “It did affect me mentally, but I didn’t realise at the time. Corrie offered Rob and me counselling, but neither of us accepted it. I didn’t think I needed it.

“I was in the middle of doing it and I didn’t want anything to interfere with that. It was so full on. I didn’t want to do it and then spend an hour talking about it.”

But that changed. “After filming finished, I felt very weird,” she admits. “I cried a lot of the time. I thought, ‘This is not like me. I’m not a crier.’ I was a bit concerned.
I thought, ‘Have I turned on a tap that I’m not going to be able to turn off now?’

“So I had a few sessions. The counsellor told me, ‘You’re grieving for Sinead and don’t even know it.’ That pretty much summed it up. It was quite understandable. Playing that role would affect anyone.” 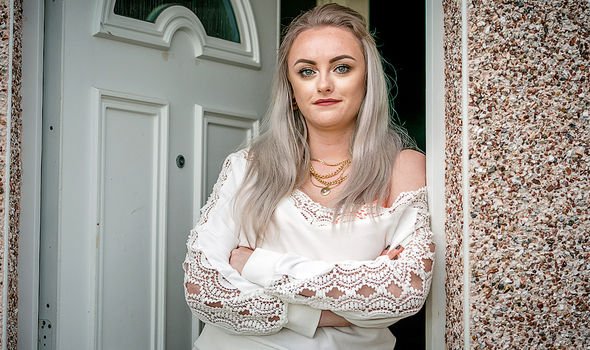 But since leaving the soap 18 months ago, she has continued to highlight the dangers posed by cervical cancer, trying to alert people to the benefits of getting tested. She is also involved with the charity Mummy’s Star, which supports women diagnosed with cancer during pregnancy or within 12 months of giving birth. The organisation really aided Katie with the portrayal of Sinead’s ordeal.

She says: “Mummy’s Star is brilliant. Rob and I are actually patrons of the charity. They helped Corrie a lot with this story. Getting cancer while you’re pregnant is such a taboo subject, but it does happen and people really need to keep an eye on it.

“I have been auctioning stuff for Mummy’s Star, and I also did Catchphrase for them. It’s a very nerve-wracking show. When you’re on there, your mind just goes blank. But I did raise a decent amount of money. When the money came in, the charity asked, ‘What’s this for?’ ‘Oh yeah,’ I replied. ‘I did Catchphrase for you, but I forgot to tell you about it!’”

Sinead was an extremely popular character and no doubt Katie could have played her for as long as she wanted. But in fact, it was her decision to leave, and she has no regrets about it.

She admits that, “It was scary, but I knew that it was the right time to leave. I’d have regretted it if I hadn’t taken that leap of faith. I was certain that I was making the right decision – although I didn’t know then that there was going to be a pandemic!” 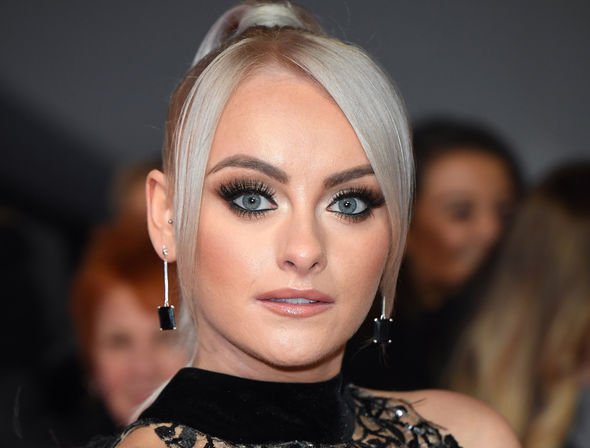 But Katie took nothing for granted when she left Weatherfield. “I never thought, ‘I’m going to leave Corrie and get loads of amazing parts immediately.’ I knew that it didn’t work like that. I miss the people there and the camaraderie on set, but Corrie will always be part of me.”

Now she’s back with a totally different sort of character in her new drama,
The Syndicate, which starts on BBC1 tonight.

In the fourth series of the popular drama, a group of workers at a dog kennel in Yorkshire win big on the Lottery.

However, it soon emerges that someone may have cheated them out of their prize-money. In this six-part drama set between glamorous Monaco and the rather less glamorous Woodvale Kennels, Katie plays Georgina, the pushy ex of Jake (Kieran Urquhart), one of the Lottery winners.

Katie loved the fact that her new role is a bit of a bad girl. “That is why I fell in love with acting in the first place,” she says. “Playing someone so different from Sinead was a dream come true. I was craving that, and I had a lot of fun with it.” 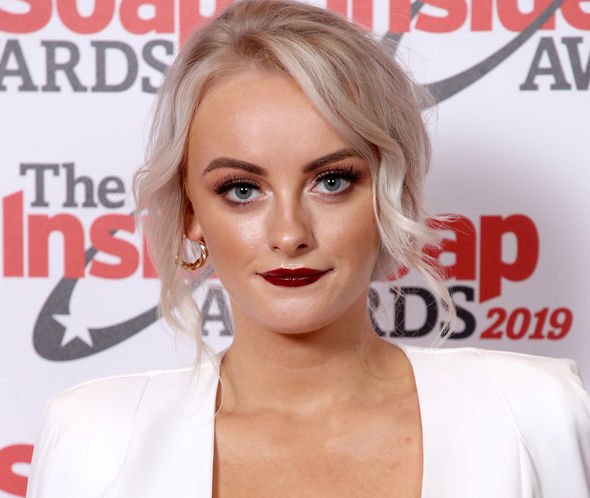 The actress says of her new challenge: “She’s fab. She’s very feisty, tough, ballsy, boisterous and rough around the edges.

“I wouldn’t want to cross her. But her redeeming feature is that she really cares about her daughter and wants the best life for her. Other than that, she’s a bit much!

“Georgina is very harsh on Jake. They had a relationship on and off for years, and she thinks she is entitled to talk to him the way she does. She thinks she owns him. She’s the Queen Bee.”

It wasn’t difficult to find her inner Georgina. “I’ve met a lot of people like her over the years. When I was a teenager, I wanted to hang around with people like her, but I wasn’t as gobby.”

While her career is firmly back on track, her lovelife is still stuck in lockdown limbo. Katie says she is, “10,000 per cent single.  I don’t trust online dating, which doesn’t really help matters in this current climate!”

Next up, Katie says, she may dip her toe in the waters of Hollywood. “I’ve always wanted to see what’s out there and experience the pilot season,” she admits. “But if nothing comes of it, at least I’ll have had a good holiday.”

One other possibility for the future might be an appearance on Strictly Come Dancing. “I wouldn’t want to do it for the fame, but you don’t often get opportunities like that, and I would love to learn how to dance.

“I’m a big fan of Strictly, but I don’t know if I could do it. It looks really hard, and I’d be really nervous. But never say never…”

Suddenly struck by the possibilities the immensely popular show might offer, Katie laughs: “Imagine when things go back to normal, you’re out at a party and suddenly you start breaking it down and doing the full cha-cha-cha on the dancefloor!

“That would be a really good party trick, wouldn’t it?”