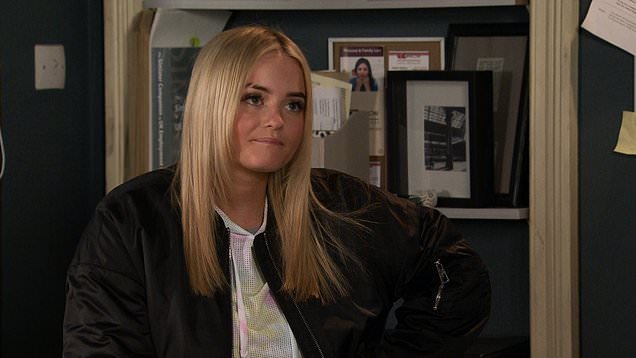 Coronation Street’s Kelly Neelan (Millie Gibson) has been through a lot in the past couple of years.

When Kelly was let go, the Weatherfield residents failed to welcome her back to the street, which led her to becoming homeless and making friends with Stu (Bill Fellows).

Even thought Kelly is now living with Gary (Mikey North) and Maria (Samia Longchambon), her life remains a dark one as she’s set to use the money from her dodgy dad to pay back his clients.

It’s a risky game, given the fact Rick’s world was incredibly dangerous but as Millie Gibson explains, Kelly constantly feels like she needs to put things right with anyone she meets after being involved in Seb and Nina’s attack.

‘Every single day after Seb’s death she tried to reconcile everything with everybody. She tried to make the street like her again.

‘She had to build up that respect from everyone around her. So, in this way she’s trying to build respect from people her dad’s done wrong to.’

‘Whenever she’s knocking on the door to these people’s lives, she’s just thinking it’ll change their life for the better’, Millie adds.

‘I do think she’s being quite gullible but if it did turn out to be wrong for her I think, because she’s had so many downfalls and slaps in the face I think she does have that spike in her. It’s hard when she’s had so many fall-backs!’